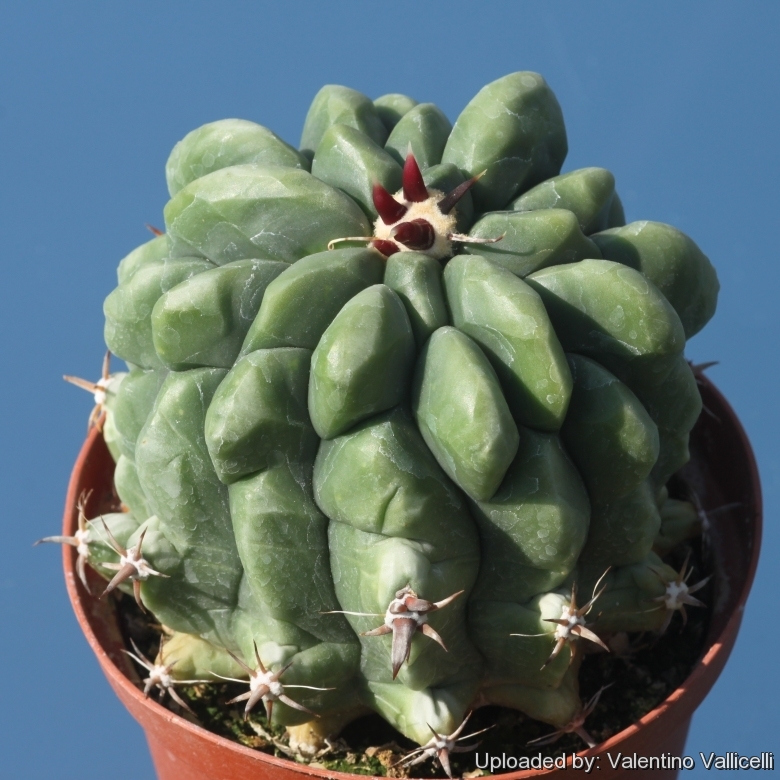 Origin and Habitat: The Ferocactus horridus came from Mexico (Southern Baja California) but this short spined form is presumably of garden origin (Nursery selected form)
Habitat: Grows in grit on the hill-sides. It gets lots of water in two months and lots of sun all year.

Description: The standard Ferocactus peninsulae f. brevispinus (also known as Ferocactus horridus f. brevispinus) is a solitary fast growing barrel ribbed cactus that differs from the type species in having a much shorter and stocky central spine (not enough to call it hooked!). This plant becomes very nice when a bit older. The strange and very rare "Chinned form" - Ferocactus peninsulae f. brevispinus (Chinned type) - has peculiar chinned ribs, this characteristic is not evident in young specimen, but will appears only in 10 or more years old plant and will progressively enhance as the plant older.
Chinned form: This peculiar variety has both tubercles with spiny areoles and smooth tubercles without areoles, the plants, that are raised from seeds are quite variable both in size and form of tubercles and in ratio of spineless tubercles. The "chins" of juvenile seedling usually bear a spiny areole, but as the plant older the chins start loosing their spines. Sometime, especially in very old specimens, the chins becomes completely naked without areoles, smooth and shining. A large well grown plant is truly an achievement. The plants with mostly spineless tubercles just at a juvenile stage are very rare and highly priced by collectors.
Stem: Round to elongated dark green 25-40 cm in diameter 40-100 tall.
Central spines: Has a very short but strong, recurving brownish-grey, large central spine. Slightly hooked or just with a slight kink at the end. Very dark red to almost black that can take a chalky colour ageing.
Radial spines: 7-10 short, straight but stout
Flower: Orange/Yellow and have orange or red midviens.
Fruits: Lemon yellow.
Seeds: Black. shining. 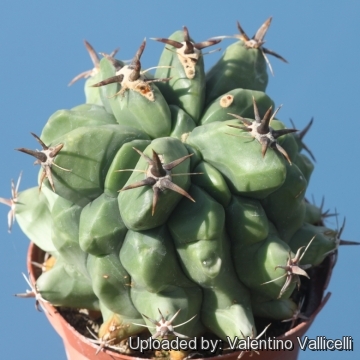 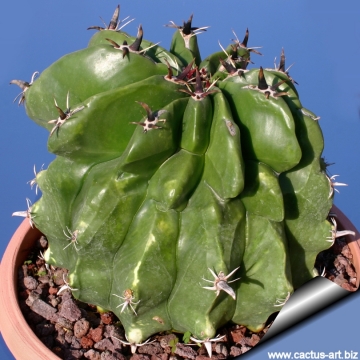 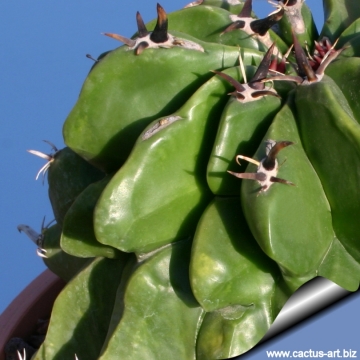 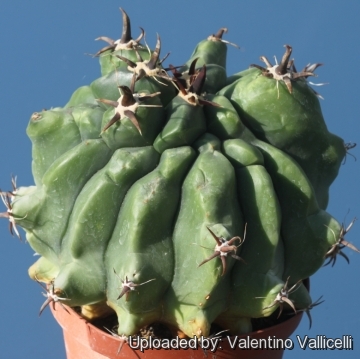 Cultivation and Propagation: It is a summer-growing and pretty easy species thought slow to start. It is suited for any rich, well drained soil such us clay, pumice, lava grit, and only a little peat or leaf-mould. If potted, repot preferably in the spring, if their roots become cramped. Generally, they should be repotted every other year in order to provide fresh soil. However, this doesn't necessarily mean they'll need larger containers. Fill about a quarter of the pot with broken crocks, gravel, etc. to promote good drainage. After repotting, do not water for a week or more. Water regularly during the aestival growth cycle (this plant need plenty of water, but do not overwater and let their soil dry out between waterings), and also needs to be avoided wetting the body of this plant while it is in sunlight. A wet cactus in the sun light can cause sun burning which can lead to scares or even fungal infections and death, keep rather dry in winter. No water should ever be allowed to stand around the roots. Feed with a high potassium fertilizer in summer. Exposure: Outside they need a bright exposure, full sun or half shade in summer if the location is exceedingly hot or bright, inside needs bright light, and some direct sun. It can tolerate moderate shade, and a plant that has been growing in shade should be slowly hardened off before placing it in full sun as the plant will be severely scorched if moved too suddenly from shade into sun.
Frost Tolerance: Light frost protection required for safe cultivation, but can tolerate sporadic light frost. This plants need a period of cool rest in winter to produce flowers abundantly.
Diseases and pests: Watch for infestations of mealybug, scale insects and spider mite.
Plant in good conditions will start to bloom when reach the diameter of only 15-18 cm.
Propagation: It can be reproduced exclusively by cuttings. The cuttings will take root in a minimum temperature of 20° C. Cuttings of healthy shoots can be taken in the spring and summer, Cut them with a sharp, sterile knife, leave the cutting in a warm, dry place for a week or weeks (depending on how thick the cutting is) until a callus forms over the wound. Once the callus forms, the cutting may be inserted in a container filled with firmed cactus potting mix topped with a surface layer of coarse grit. They should be placed in the coarse grit only; this prevents the cut end from becoming too wet and allows the roots to penetrate the rich compost underneath, they root easily with no further assistance. Just let them lay on the soil and you have a new start. The cuttings should root in 2 to 8 weeks. It is also possible to reproduce it by seeds but the result is unpredictable.