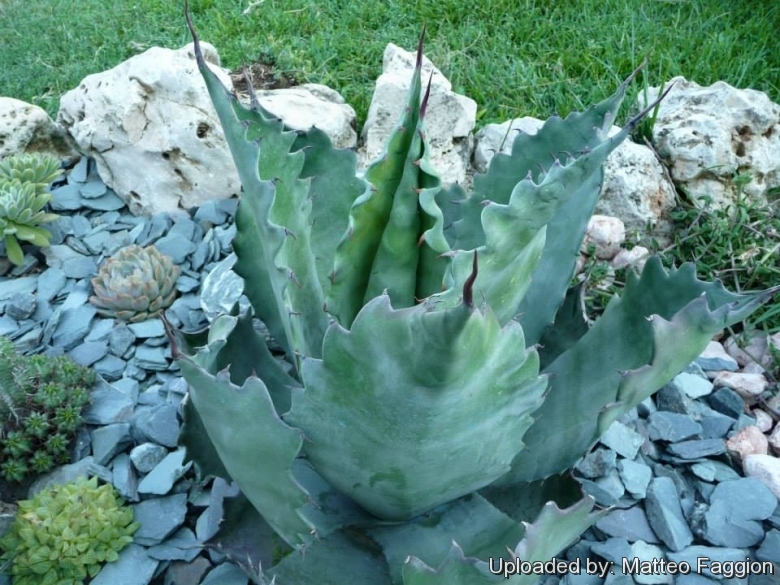 Description: The Mescal Ceniza (Agave colorata) is an attractive wide-leafed agave with succulent rosettes 60 to 120 cm in diameter with jagged spines on the leaf margins. This plant is usually solitary and does not often send up many plants around the main rosette, but sometimes It may slowly clump and mature plants develop a short stem (larger group can grow up to 1.2-1.8 tall and m 2-3 m in diameter). It is similar in size and armament to its bovine cousin (Agave bovicornuta), but the blue-grey leaves are wider, with stunning leaf imprints. Leaf imprints develop during the formation of the bud.
Succulent rosette Compact, small to medium sized, up to 60 to 120 cm in diameter.
Leaves: 25-60 cm long and 12-18 cm wide,obovate to lanceolate constricted near the base, frosty grey-blue or light grey, rough, with prominent pinkish cross-bands, and strong distinctive bud imprints (the impression of adjacent leaves) . The margins are wavy and heavily "toothed". Each of the prominent crenations on the leaf margins has a brown or grey tooth 5 to 10 mm long. The straight to curved brown to grey terminal spine is 3 to 5 cm long.
Inflorescence (panicles): Straight to strongly curved. The flower stalk can reach to 2-3 m tall with about 15-20, loosely arranged, variable in lenght, densely flowered umbels located in the upper part of the scape.
Flowers: Red in bud, opening to yellow and orange c.50 to 70 mm long. Flower tube cylindrical15 to 20 mm long.
Blooming season: Flowers come in the spring ( from March through June) when the plant matures (around 15 years).
Fruit (capsules): Oblong to clavate, brown 3-chambered, 45 to 55 mm long and 15 to 17 mm wide.
Seeds: Black 5 to 6 mm long.
Remarks: Agave shrevei is most similar to A. colorata but has narrow (8-14 cm) and unbanded grey or green leaves, and may be only a variety of it. Very similar to A. colorata is Agave fortillora, but the undulate margined leaves are generally narrower (8-12 cm) and longer (50-100 cm) and its panicle taller (4-6 m). Agave palmeri, also has narrower leaves (7-10 cm) with less undulate margins. 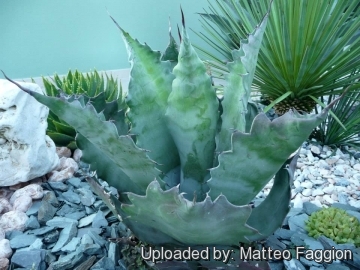 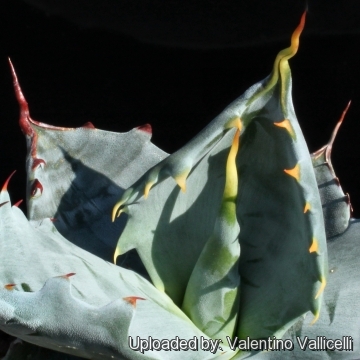 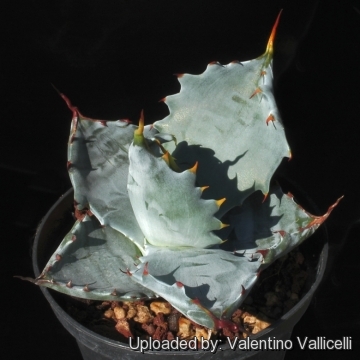 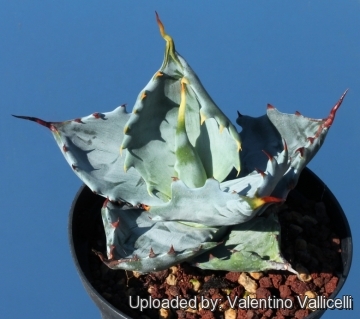 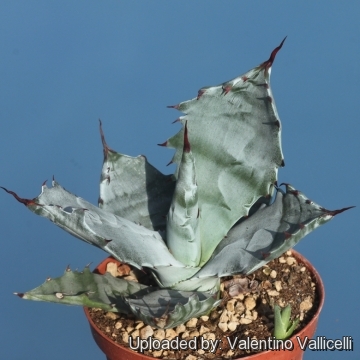 Cultivation and Propagation: This rosette-forming succulent agave is a slowly growing ,rosette-forming plant that matures and blooms (around 15 years) in spring with red buds opening to yellow and orange flowers in a panicle on a 3 m tall stalk. It is a relatively easy-to-grow species. If grown in a pot, it is a wonderful looking species.
Exposure: Suited for light shade to full sun, but better with some shade in summer. Plants cultivated outdoors are more drought tolerant and can take some heat and full sun.
Soil: It does great in containers or in the ground. It needs a very well-drained soil.
Water requirements: It grows fairly fast in summer if provided with copious water, but allow to dry thoroughly before watering again (the more water and fertilizer this plant gets, the faster it will grow). During the winter months, one should only water enough to keep the leaves from shrivelling.
Hardiness: Agave colorata have proven surprisingly frost tolerant.
Food: The “heads” are delicious when roasted or baked and occasionally eaten by the Seri and other tribes.
Beverage Produces wine (Mezcal) from crushed stems.
Landscaping: Suitable for large pots or as an accent plant in the landscape, it shows off best in containers when the perfect pot can be chosen and the botanical sculpture is displayed upon a pedestal. The plants are resistant to frost and agave weevils (Scyphophorus spp.)
Propagation: Reproduction is primarily by seed, occasionally by off-sets. The Mescal Ceniza occasionally produce suckers that can be used to rise new plants.