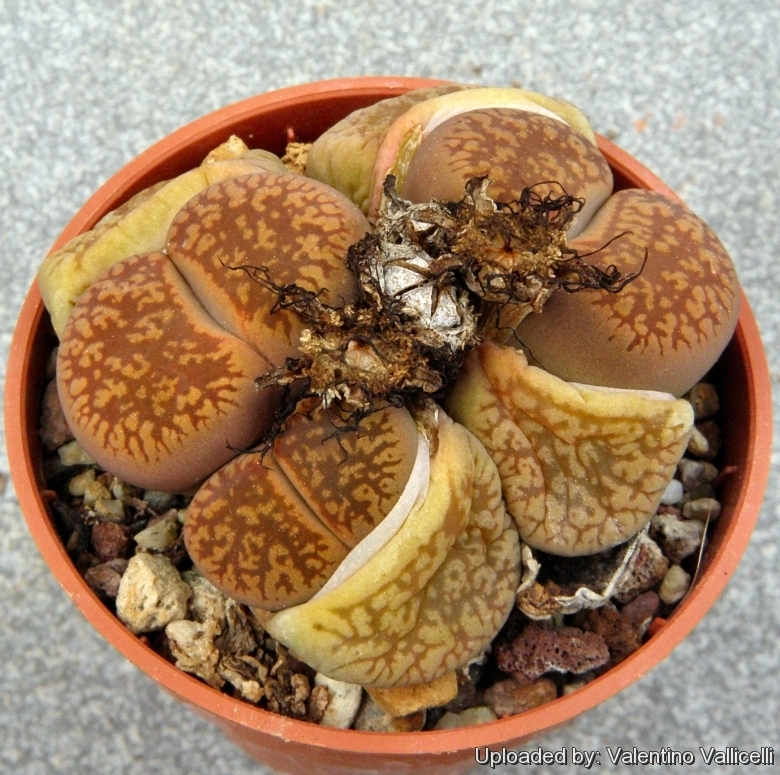 Origin and Habitat: Type Locality 25 km South-West of Helmeringhausen, Namibia.
Habit: It grows on pink and reddish-brown, rocky soil derived from weathered gneiss. It is threatened by harvesting for the specialist succulent horticultural trade.

Description: Lithops gesinae var. annae is a local or morphological form of Lithops gesinae. It is quite similar to the latter and is distinguished by its larger, wider, less convex bodies of a reddish brown or tanned colour. The windows are usually more developed with a different layout and the flower are larger and very scented. The differences are easily seen at the first glance.
Habit: It is an acaulescent perennial, geophytic, succulent. Number of heads seldom more than one, occasionally two. It is variable, but conforms to the typical Lithops morphology: two thick, fleshy windowed leaves separated by a crack from which a yellow flower appears. The windowed part allows light into the inner portion of the leaf where the process of photosynthesis is carried out. Due to this very particular structure they are able to stand extended periods of drought.
Bodies (Paired leaves): Small to medium sized, compact, 25-36 mm long, 15-27 mm broad, leaves cordate-truncate in profile, deeply fissured, lobes slightly to widely divergent. Faces flush to slightly elevated, elliptic to slightly reniform, smooth. Margins usually distinct but very irregularly dentate and sinuate beige tinted with pink or yellow, or grey. Island usually distinct, small to large, irregular in shape, opaque beige tinged with pink, yellow or greyish pink. Windows partially occluded to more or less open. Channels narrow to broad, very irregular, slightly impressed often tapering into finger-like projections into the outer margins and occasionally even over onto the shoulders. Windows and channels orange-brown, red-brown, brownish or reddish green or greenish brown. Rubrication absent.
Flowers: Diurnal, daisy-like, scented, medium to very large, up to 48 mm in diameter (usually 30-35 mm), shining golden yellow.
Blooming season: Late autumn. Lithops naureeniae and Lithops olivacea are the last of the yellow-bloomer to flower.
Fruit: Capsules mostly 6-chambered, profile boat-shaped, top flat to slightly convex, faces elliptic.
Seeds: Yellow-brown.

Subspecies, varieties, forms and cultivars of plants belonging to the Lithops gesinae group 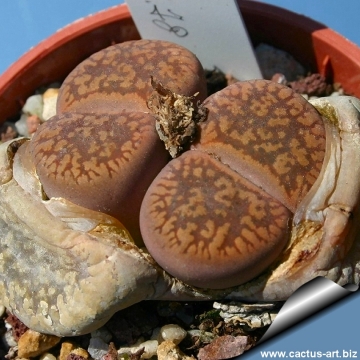 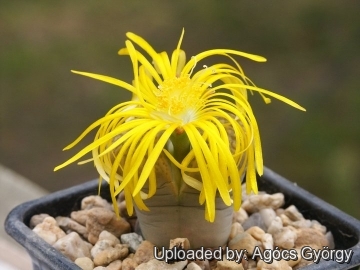 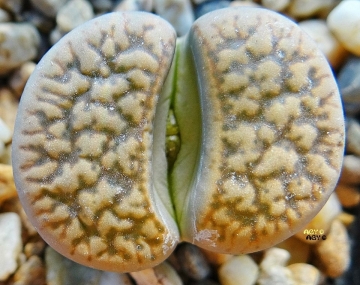