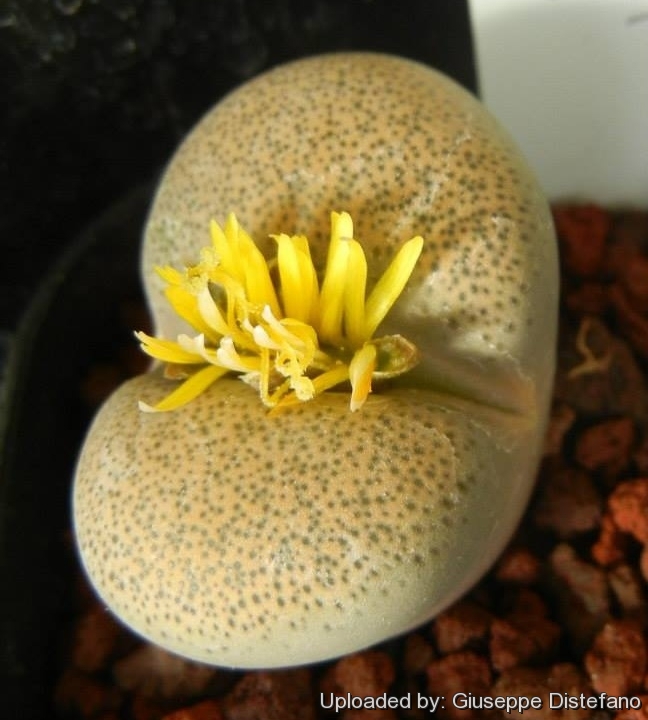 Origin and Habitat: Type Locality (of L. localis): 25 km South of Beaufort West, South Africa.
Habitat: It is found under small shrubs ans stones on gravelly plains and flats.
This species is very difficult to find in the field, especially when slightly covered with fine somewhat reddish sand or dirt. The colour of the dirt approximates that of the upper surface of the lobes, and these are practically level with the soil. This way Lithops localis resist attacks from herbivorous predators, and is almost impossible to distinguish from their surroundings until they erupt into vivid daisy-like yellow flowers. They are pollinated by bees, flies, wasps, gnats, bugs and other insects that are common in the area.

Description: Lithops localis (L. terricolor) belongs to the group of the yellow- blooming living stones and is distinguished especially by the pellucid dots regularly scattered over the top surface of the leaves and with a small window. The patterns of colour and dots on the face is more or less regular within certain ranges of similarity. For this species, the numerous dots (small windows) are very specific ranging in colour from dark grey through browns to purple. It is generally smaller than most Lithops and conforms to the typical Lithops morphology: two thick, fleshy windowed leaves separated by a crack from which a yellow flower appears. The windowed part allows light into the inner portion of the leaf where the process of photosynthesis is carried out.
Habit: It is an acaulescent perennial, geophytic, succulent, very seldom solitary, usually found in clumps of 6-10 plants up to 3, 5 cm high, but also forming cushions with 20 or more heads.
Root: Quite shallow, with a slightly thickened axis and thin, lateral, fibrous roots.
Bodies (Paired leaves): Small to medium, compact, obconic, truncate, 15-30 mm long, 12-24 mm broad, fissure fairly deep and widely gaping. Tops of leaves, mostly elliptic, slightly to strongly convex, smooth, opaque dark or pale green or variously coloured comprising pale pinkish, yellowish, greenish or bluish grey, or pinkish, yellowish or reddish brown, or greyish blue, green or lilac. Windows sometimes completely open or partly occluded, but usually absent with numerous
dark-green dots in it, or window forming smaller areas with dark-green dots or covered only with numerous dark-green separate or confluent dots; separate dots on the margin and sides; sometimes numerous about 20 black dots distributed more or less evenly over both lobes, or a few only on one lobe or absent altogether. Islands usually small, few to many, very irregular. Channels usually not distinguishable. Rubrication absent, dusky dots usually very numerous, superficial and clearly visible. Margins normally not distinguishable, sometimes fairly well-defined.
Flowers: Daisy-like, diurnal, small about (12-)20-30(-35) mm in diameter, yellow, sometimes with white centre.
Blooming season: Autumn (in habitat blooms in April)
Fruits: Fruits mostly 5 chambered profile boat-shaped, top flat to slightly convex or peaked, faces broadly elliptic to almost round. 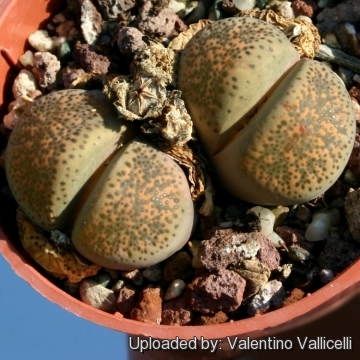 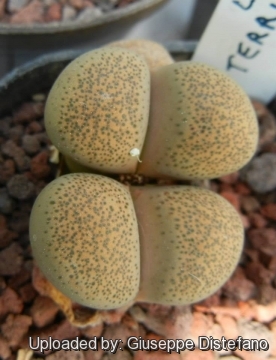 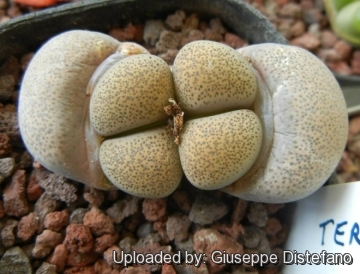