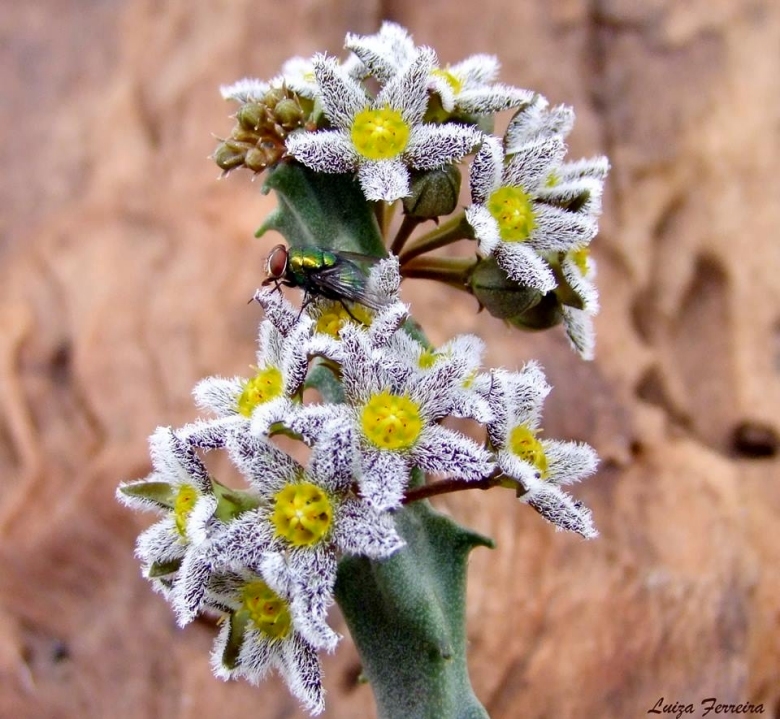 Origin and Habitat: Caralluma burchardii ssp. maura found only in Morocco (Atlantic coast from north of Agadir to Oued Noun, which lies some 20 km south of Sidi Ifni and extends inland to the westernmost slopes of the Anti-Atlas. This distribution has been attributed to the species’ preference for a relatively high atmospheric humidity)
Habit and ecology: This species grows mostly on calcareous clayey soils near the cost. It is a more difficult stapeliad to find in habitat and invariably grows well- hidden under thorny shrubs, with only the stem tips emerging from the plant's shelter, less frequently, in other succulent shrubs such as Euphorbia echinus (south of Agadir), Euphorbia officinarum (north of Agadir), Euphorbia lamarckii, Argania spinosa, and Kleinia anteuphorbium. Seeds falling into these formidably spiny clumps can thus germinate sheltered from predators. Most of the succulent stems of Caralluma burchardii ssp. maura plants are grazed by herbivore animals, but also has the ability to send out underground runners that emerge from the ground in the rainy season. Only those emerging in the middle of a clump of vegetation armed with spines have any chance of survival to the predation.

Description: Caralluma burchardii subsp. maura is a cactus-like perennial succulent with smooth whitish erect stems produced in succession from underground rhizomes. It produces an abundance of small flowers covered in dense, whitish hairs, giving the corolla a white appearance. The subsp. maura differs from typical C. burchardii to have duller and more slender stems, compressed ribs and smaller rudimentary leaves. The flowers are pedicellate (not sessile), smaller (7-9 mm in diameter versus 13 mm), with an unspotted campanulate corolla (not rotate). The flowers have a characteristic uniformly golden yellow corona and the appendages of outer corona are longer and hooked (not straight and capitate). All the forms of the Moroccan taxon (forma grandiflora, forma sordida, and forma viridis) were subsumed under C. burchardii subsp. maura by Meve & Liede (2002).
Stems: 1,5-2 cm thick, 15-50 cm high, 4-ribed, more or less speckled with purple, angles acute with triangular tubercles. The plant also has the ability to send out underground runners (stolons), these are sub-cylindrical, up to 60 cm long and emerge far away from the ground in the growing season.
Leaves: Rudimentary, c. 1 mm long, triangular, turned downward, in rhizomes scale-like.
Flowers 3 to 9 in extra-axillary inflorescences produced just below the tip of growing stems. Pedicels, glabrous about twice the length of the calyx (6-7 mm). Sepals 5 glabrous, succulent, lanceolate, subacute 2-2.5 mm long. Corolla, broadly bell-shaped 7-9 mm in diameter, irregularly papillate-punctate greenish-brown to dark olive green, densely covered with white-transparent flexible hairs 0.4-0.8 mm long. Tube 1/4 of corolla. Lobes 3 x 3 mm margin sub-revolute not cilliate. Corona golden yellow, glabrous.
Chromosome number: Caralluma burchardii subsp. maura has a hexaploid genome (2n = 66 chromosomes), as is also the case with Caralluma joannis. 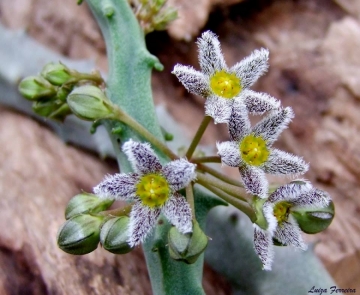 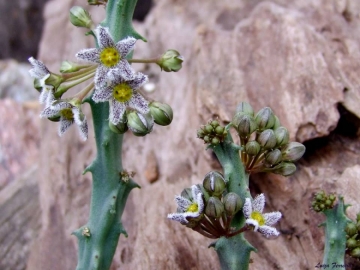 Cultivation and Propagation: Caralluma burchardii subsp. maura is xerophytic and adapted to dry soils, but despite its provenance it is without doubt an easy species to grow and not difficult as commonly supposed. In cultivation it can be grown as a hanging basket where it will happily flower.
Growth rate: It is a relatively rapidly growing and easily flowering species that will make large clumps given the best conditions. Most plants will offset readily, and clumps can be produced in a few years.
Soils: It likes very porous mineral cactus mix soil, pH 7,5 to 8,5 (mildly alkaline), but can become too elongated if compost is too rich.
Repotting: This plant needs plenty of space for its roots, repotting should be done every other year or when the it has outgrown its pot. Use pot with good drainage.
Watering: It needs regular watering, especially during the hottest summer days; provide also some light watering if the green house temperatures in winter are elevated. Either excessive or very scarce watering can induce rot.
Fertilization: Feed with a high potassium fertilizer in summer.
Frost Tolerance: Reputedly resistant to light frost if kept on the dry side prior to, and during, cold weather (hardy to -2 C ° C, or less for short periods), but for safe cultivation it is best to avoid freezing temperatures. In the rest period no high atmospheric humidity!!
Sun Exposure: Best for half-shade but grow well in full sun and full shade too. Tends to bronze in strong light, which encourages flowering, but is likely to suffer from sun scorch or stunted growth if over exposed to direct sunlight during the hottest part of the day in summer.
Diseases: This species is more resistant to cryptogamic diseases than others and is quite resistant to the “Balck spot” disease of Asclepiads. Rot it is only a minor problem with carallumas if the plants are watered and “aired” correctly. If they are not, fungicides won't help all that much.
Uses: It is an excellent plant for container growing. Cascading, clustering, great for a hanging display. Stems may possibly become purple and limp in winter, but revitalize in early spring. It always looks good and stays small. It look fine in a cold greenhouse and frame or outdoor in a rockery.
Traditional uses: Unlike Orbea decaisneana, which is poisonous, C. burchardii ssp. maura is not only appreciated by the goats and sheep, but equally by the Berber tribes, who eat the young shoots.
Propagation: Seeds and cuttings. Cuttings will root only in hot weather. Cuttings must be kept very dry to root. Seeds germinate readily if they are sown when fresh.