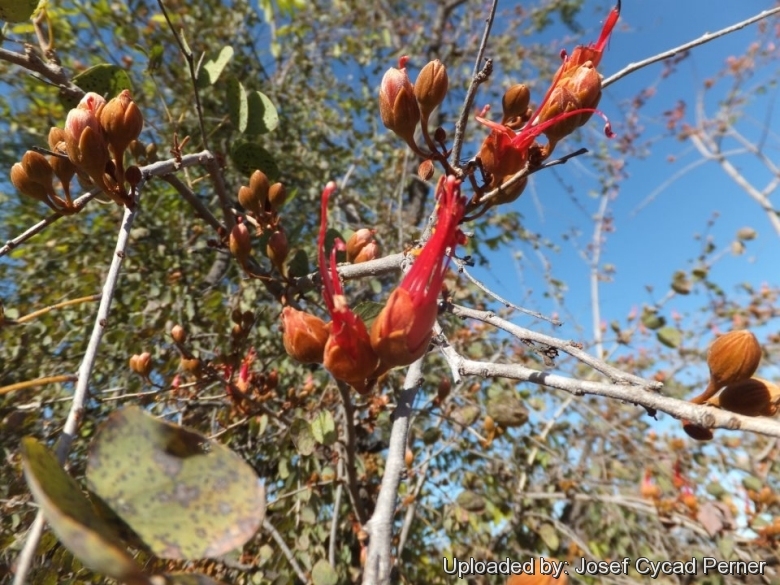 Origin and Habitat: Bauhinia cunninghamii is native to northern Australia where it occurs from Western Australia through the Northern Territory to Queensland (Australian Capital Territory, New South Wales, Northern Territory, Northern Territory, Queensland, Queensland, South Australia, Victoria, Western Australia, Western Australia).
Altitudinal range: From near sea level to 500 metres above sea level.
Habitat and ecology: The tree has a wide range of habitats, it occurs on red alluvial sandy, black soil, cracking clay soils, loamy or granitic soil, sandstone scree over basalt, stony ground, often in watercourses, creek beds and on levees, flood plains. It usually grows in open woodland or vine thickets but also found in monsoon forest and similar closed forest communities. Common with Acacia tumida and eucalypts. It also occours in pindan and at the margins of monsoonal forests where it provides a popular shelter for wallabies and other animals during the heat of the day. It is a prominent species of drier northern country, especially during flowering time in late winter and spring. The trees are hosts to nests of native bees. It’s hollowed out limbs are a favourite nesting site for bush honey bees. Unlike eucalypts which often have a sterile area, void of other plants beneath them, bauhinias allow other shrubs and grasses to grow happily in the mulch-enriched ground beneath their canopy. The leaves are high in protein and are relished by many grazing animals, especially cattle. The trees sprout from the trunk after fire. There are no major threats known to this species. However, threatening processes to the area include grazing pressure, weed colonization, changes in fire regimes and changes to hydrology.

Description: The Kimberley Bauhinia or Jigal Tree, Bauhinia cunninghamii (formerly Lysiphyllum cunninghamii) is a deciduous shrub or tree 1-12 m (occasionally up to 18 m, but usually less than 6 metres) in height. The tree has a short, stout trunk, its outer branches hang down giving it a characteristic weeping appearance. It produces stunning pinky-red flowers from April to October, followed by large, reddish-brown seed pods from November to January, small petals protruding from a velvety cup, often overflowing with sweet nectar. The nectar attracts honeyeaters and native bees. The leaves of the Bauhinia are its most distinctive feature. Each consists of a paired leaflet resembling a butterfly. Bauhinia trees drop their leaves in the late dry season, although pods and new leaves appear often just before the rains. New growth in August because of the heavy dew at this time of the year.
Derivation: It has been named after Cunningham, an early Australian botanical collector,
Stems: The trunk is short, stout, with rough fissured or tessellated dark grey or dark brown bark which appears almost black when viewed from a distance. Outer branches hanging down giving it a characteristic weeping appearance.
Leaves: The compound leaves have two lobes which are joined like a butterfly’s wings, each leaflet blade about 20-30 mm long, 10-20 mm wide, sessile usually with 4 or 5 longitudinal radiating veins. A terminal spine or gland usually present between the leaflets. Stipules obovate. This back-to-back positioning of the leaves gives rise to the Aboriginal name of ‘Jigal’ tree. Jigal means mother-in-law and according to Aboriginal custom the mother-in-law and son-in-law must not directly face each other. The tree is deciduous; leafless for a period in the dry season.
Flowers: Pinky-red, somewhat tubular, nectar rich. Calyx and corolla pubescent on the inner and outer surfaces. Calyx tube and lobes coarsely rugose. Petals clawed. Stamens ten. Staminal filaments red, about 15-25 mm long. Pollen yellow. Ovary stalked, ovules about 15.
Fruits: The seed pods are large 2-20 cm long, 4-5.5 cm wide, reddish brown, becoming darker as they mature.
Seeds: Flat, about 10-12 x 7-10 mm.
Phenology: The flowering occurs in winter from April-October, fruiting from September-December.
Seedlings: Cotyledons oblong to obovate, about 12-15 mm long, fleshy, lacking venation, produced at ground level. First pair of true leaves compound with two leaflets. At the tenth leaf stage: leaves compound with two leaflets, leaflets more or less orbicular, unequal-sided, 3-5 veins radiating from the base. 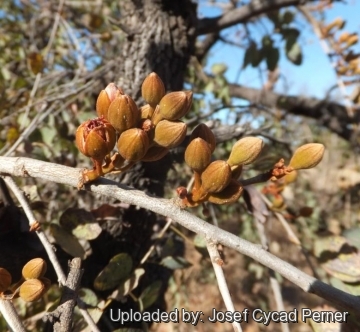 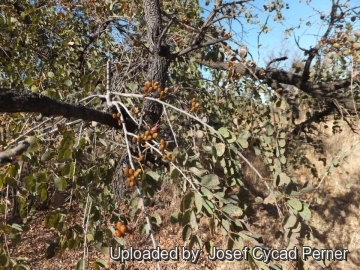 Cultivation and Propagation: Bauhinia cunninghamii (Lysiphyllum cunninghamii) is a small tree raised easily from seed and adapts well to the low water garden. They can be encouraged with drip irrigation in their early stages, and when established can be left to their own devices. It grows is adapted to hot arid tropics, and tolerant of alkaline, conditions. It is suited to greenhouse culture but does well out of doors in tropical and mild Mediterranean climates. It is an excellent species for shade, shelter, as a live fence and for erosion control. Has potential as a street tree for dry areas. The Bauhinia trees flowers spasmodically between April and August and fruits appear between November and January.
Exposure: It requires high light, so it is planted in full sunlight, but tolerates light shade.
Hardiness: Keep at a minimum winter temperature of about 12°C (Mature plants are tender and hardy only to 2° C for a short period; avoid in any case freezing temperatures).
Watering: Water plentifully in summer but keep rather dry in winter. It doesn't like wet winter but will survive.
Traditional uses: The ash is used to mix with native chewing tobacco. The leaves and pods are eaten by stock, and are relatively high on protein and minerals. Kimberley Aboriginal people are known to suck the sweet nectar from the flowers and : the sap when dry can be mixed with nectar forming a chewy gum. It produces excellent firewood and burns hot with little smoke and often used for cooking and branches are used to make windbreaks. The roots and bark are used by Aborigines to treat headache and as an antiseptic and as a remedy for fever, and the nectar provides a sweet drink.
Propagation: Propagate usually from seed that are easy to germinate. Seeds need up to 1 month to germinate. Minimum 30°C. Maximum 42°C. Before sowing put the seeds in hot boiling water and the seed starts to peel, don't worry and put them in pots they will start germinating in the following weeks, just ensure that they grow straight, they have the tendency to fall down. Browsers are used to protect the young seedlings.