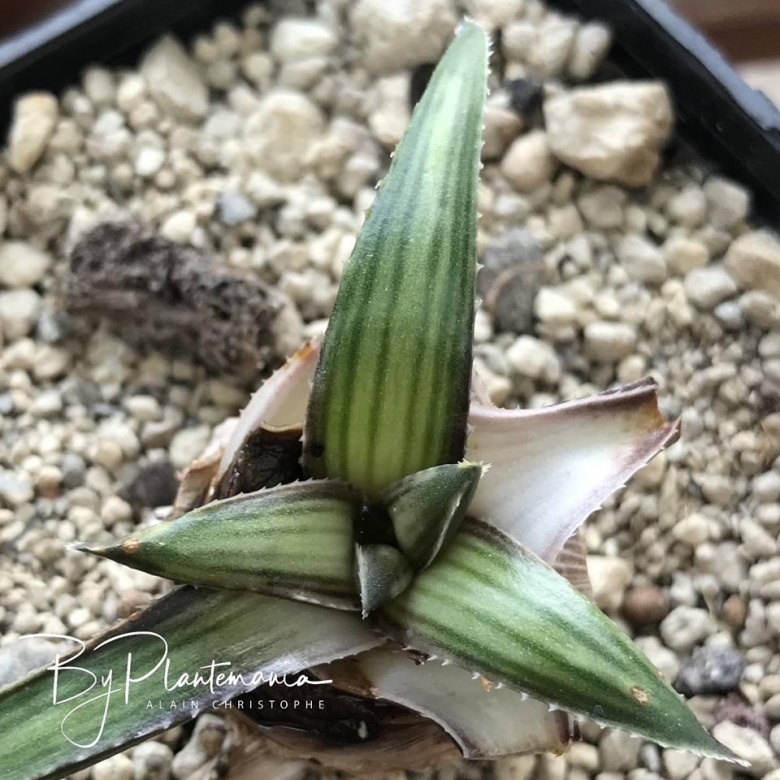 Origin and Habitat: Aloe richardsiae occurs in the Rubeho Mts and then extends further west, Tanzania. Estimated area of occupancy km2 40. Number of Locations 4.
Type locality: Tanzania, Mbeya District, Ipogoro-Mkawa track.
Altitude range: 1075-1700 above sea level.
Habitat and Ecology: A. richardsiae is a grass aloe growing in rocky habitats in montane grass clearings in woodland, it is also recorded growing in clay soils in open woodland, usually near watercourses. It is presumably locally common even if severely fragmented. The bulb-like swelling below ground, is a survival strategy against seasonal grass fires. The bulb also helps to prevent the plants from drying out during the long dry winter months. The high altitude grasslands in many parts of this region have been converted to cultivated fields, for growing potatoes and other crops.

Description: Aloe richardsiae is A stemless succulent herb whose leaves die back during the dry season. The green rubbery leaves arise from swollen sheaths (or leaf bases) which forms a subterranean bulb of up to 40 mm in diameter. The roots are thick and succulent. The flowers are orange-scarlet in colour. Flowers in mid summer. This aloe is quite different from most other species in the genus.
Derivation of specific name: Aloe richardsiae, was named in honour of the British botanical collector Mary Richards' after she discovered it in the wilds of south Tanzania where it was growing, as she said, 'as thick as bluebells in an English wood'. This aloe is only one of a growing number of plants named after her because she was their first discoverer.
Stem: Very short.
Roots: Thick and fleshy.
Leaves: 8-10, rosulate, expanded at the base below ground level into a bulb-like swelling ca. 3-4 cm in diameter covered on the outside with dried, brown scales. Lamina linear-lanceolate, succulent ending in a sharp point 20-25(-30) cm long and 1-1.5 cm wide towards the base and serrated at the edges. Marginal teeth minute, crowded, white, cartilaginous, 0.5 mm long, 1-2 mm apart. Upper surface canaliculate (deeply channeled). The leaves are solid green in colour and obscurely lineate.
Inflorescence: Erect 35-45 cm, simple (unbranched). Peduncle (scape) with a few sterile papery bracts. Raceme cylindrical-acuminate, 20-30 cm long, 5-6 cm in diameter, lax with flowers 1-2 cm. apart. Bracts ovate-acute, (10-)25-30 mm long, (4-)7-8 mm wide, white, papery, imbricate in bud stage. Pedicels 5-7 mm long.
Flowers: Pale varying from orange-scarlet to yellow, cylindrical to 35-48 mm long, base rounded, 7-8 mm in diameter across the ovary, slightly narrowed above, then enlarging to mouth. Outer segments free for 15 mm, apices rounded. Stamens scarcely exserted, style a little longer.

Notes: The bulbs of A. richardsiae and Aloe bullockii of Tanzania, as well as Aloe knipholioides, Aloe modesta and Aloe inconspicua of South Africa, all serve as a reminder that the aloe is not very far removed from the popular concept of a lily.

Cultivation and Propagation: Aloe richardsiae is a summer grower. The “bulb” is put in a big pot. The plant forms easily side bulbs. In addition, the bulbs grow relatively hard. The leaves grow in spring, followed by the inflorescence in summer. The plant also forms leaves after flowering. In autumn, the soil will be kept dry and the leaves will die off. A. richardsiae is not difficult to grow.
Pest and diseases: In culture this species can perish perhaps not from rotting, but from underwatering (is a plant that likes clay soils). Also it suffers infection of mites (a common affliction with this species).