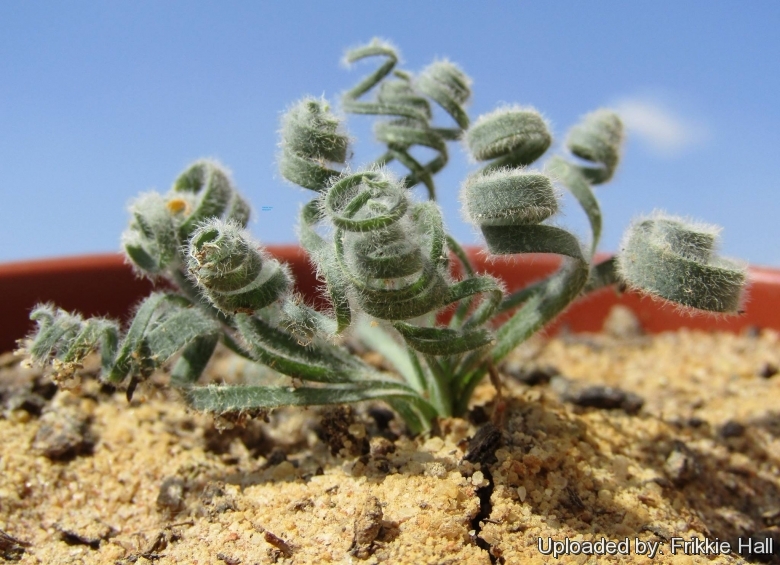 Origin and Habitat: Gethyllis villosa is found on South Africa (Northern Cape, Western Cape) from Namaqualand to Mossel Bay and the western Karoo.
Habitat and ecology. This species grows in sand or clay on flats or south-facing slopes. It is a winter grower. Both leaves and fruit reach the soil surface more or less at the same time and this happens in autumn in South Africa. When the rainy season (winter) comes to an end and the temperatures rise towards spring, the foliage dies back and the plants begin to go dormant. As the fruits ripen, they fall over and, if not eaten or removed, the seeds will germinate to form a dense group of seedlings.

Description: Gethyllis villosa is a small bulbous plant that grows 3 to 15 cm high and has and strap-shaped loosely spiraled leaves with star-like white hairs. The flowers are white or pink and the style is bent to the side which is a characteristic of this species. G. villosa produces its flowers at the end of growing season (October to March in the wild), long after the leaves have died back at the end of spring. This condition is known as hysteranthy and is common in geophytes or bulbous plants that build up the carbohydrate reserves in their bulbs during winter. The leaves then wither and disappear at the beginning of summer before the plants once again produce inflorescences.
Bulb: Small,18-24 mm in diameter, ovoid. Tunics produced 2.5 cm or more above its apex.
Leaves: 3–10, developed after the flowers, linear, (4-)5-7.5(-12) cm long, 1.5-4(5-) mm broad, flat and loosely twisted spirally towards the apex varying from flat on the ground to spiralled above ground. The leaves are densely clothed with ascending or deflexed T-shaped hairs that are whitish, bristly and soft. The leaves are dry at flowering.
Flowers: Probably self-sterile, star-shaped, mildly scented, white or pink, 40-90 mm in diameter. Petiole 35-80 mm long and 2.5-3.5 mm in diameter. The flower consists of six distinct tepals, which vary from 20-40 mm in length with six anthers with the style longer than the stamens. Perianth-tube pilose, 5-10 cm long. Segments lanceolate, reflexing, 4 mm broad. Stamens 6, one-third the length of the segments; anthers about as long as the filaments. Style straight, reaching to the top of the stamen or longer. The style is more or less 15 mm in length curved sideways and has a broad 3-lobed stigma.
Fruit: Club-shaped berry, aromatic, white to cream to yellow, contemporary with the leaves, 5 cm long, 8 mm in diameter. Once pollinated fruiting, begins and the ovary begins to swell. The berry is gradually formed and pushed above ground during autumn. The plant can take more than two months to produce the fruit, just in time to release the seeds for the rainy season. The seed numbers vary from 34 to 115 per berry. The size and shape of the berry and seeds are similar to those of Gethyllis multifolia. 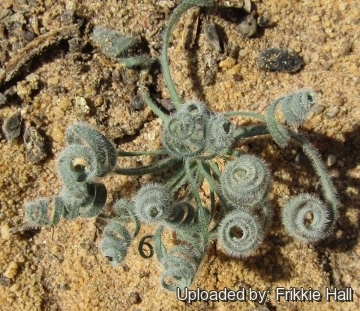 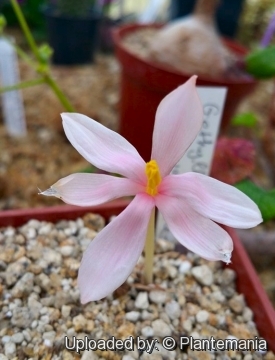 - This species can be identified from the twisted hairy leaves that died back at the end of spring before the flowers appears. Photo by: © Plantemania 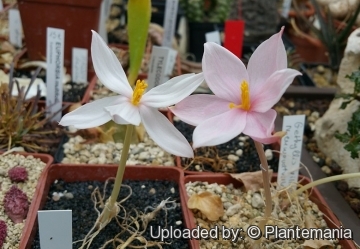 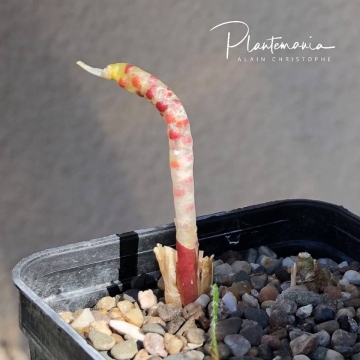 Cultivation and Propagation: Gethyllis villosa comes from the winter rainfall regions of south-western Africa, producing its miniature whirlwinds of leaves in early winter. The leaves usually curl better if given good light. It would probably look even better in a hot dry environment. It is one of the most difficult members to cultivate successfully over an extended period. It is a winter-growing and summer-dormant species that needs to be kept almost dry during its dormancy as the bulbs is disposed to dwindle and rot. Its summer rest must be absolute and does not initiate new foliage until the cooling effects of autumn. This plant may or may not have foliage in the heat of the summer. If it does have foliage, during the hottest part of summer, the foliage and plant may look ratty but as long as the bulb is firm the plant is in good health and it will improve in appearance once new foliage initiates in the autumn. A great plant for the southern rock garden as well.
Exposure: Prefers some direct sun but will scorch in hot, sunny, dry locations.
Waterings: Water sparingly when growing and a little care, it is a definite water-wise species. The curling of the leaf tips is largely dependent on weather conditions. Cool dry conditions encourage the leaf tips to curl, while warm most conditions tends to encourage erect, straight, uncurled leaf tips. When flowers begin to appear, water should be withheld in order to avoid rot. If the plants are allowed to dry too much, they will go dormant.
Soil: Coarse river sand or gravel must be incorporated into the growing medium for excellent drainage. It is often suggested to add gravel mulch on the top of the soil, so when the bulbs are dormant the pot remains interesting to view.
Hardiness: In the winter plants can be left outside because the spirally foliage is reliably hardy to – 7° C. In colder areas the plants should be protected in the greenhouse.
Traditional uses: The medicinal uses of this genus range from cures for colic, digestive disturbances, teething problems, fatigue, boils, bruises and insect bites, to being used as an
aphrodisiac.
Propagation: Division, seeds. Seed germinate easily. As the fruits ripen, the seeds will germinate without a preceding resting period and in exceptional cases germination takes place within the berry. It is best to propagate seeds in the autumn through winter in a mixture of moist peat and perlite. Cover the pot and plant with a plastic bag secured by a rubber band to prevent the moisture from escaping. Place in indirect sunlight or under a fluorescent light. Repot in its regular mix after it has been growing for a while. After dividing plant or removing offsets, pot it in its regular potting mix.