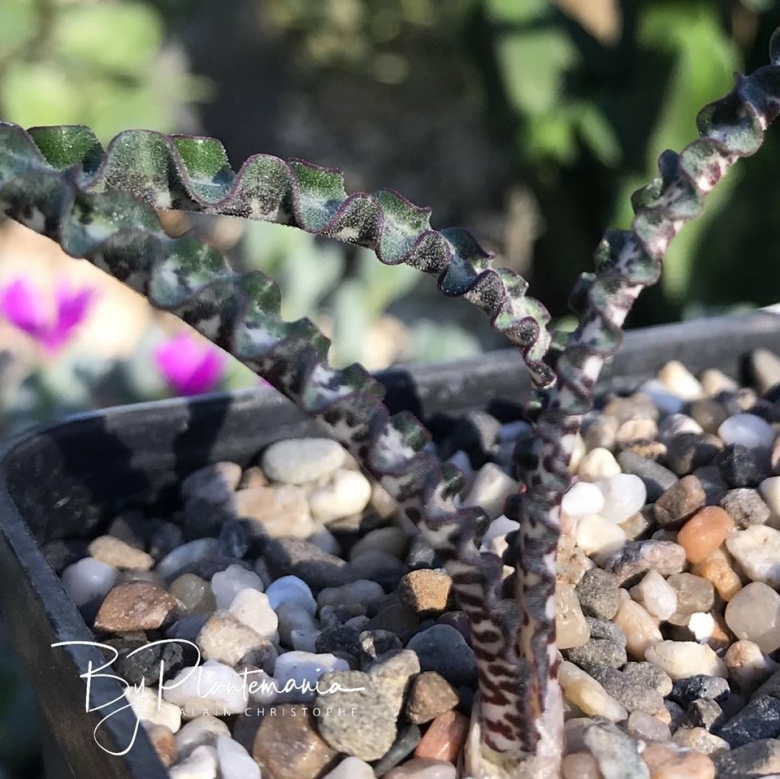 Origin and Habitat: Northern Cape and Western Cape ( from Clanwilliam, near the Olifants River north throughout Namaqualand to Steinkopf ), South Africa.
Habitat and ecology: Haemanthus crispus is a bulbous geophyte occurring in the winter rainfall region. It is a common species and is found, growing from the coastal flats eastwards onto the stony, lower slopes of the first terrace, usually in heavy soils and often in the shade of low succulent shrubs. nlike the summer-rainfall species of Haemanthus, which usually flower in spring to summer, H. crispus, like the other winter-rainfall species of the genus, flowers in the dry autumn months (March to April) when little else is in flower.

Description: Haemanthus crispus is a small deciduous bulbous plant, mostly forming small clusters, but may remain solitary. It is distinguisced by its narrow, strap-shaped leaves with wavy margins and dark green and maroon blotches on the underside. The flower-heads of H. crispus, are up to 20 cm tall with cup-shaped waxy, petal-like spathe valves and dense bunches of flowers on them, they are almost always red except for a single known population from Koebee Pass on the Bokkeveld Escarpment east of Vanrhynsdorp, where they are pink. The real flowers are within the spathes and only the yellow stamens are visible. The flowers are soon followed by round, pale pink berries.
Derivation of specific name: From Latin 'crispus', 'curled' or 'crinkled' referring to the characteristic crispy leaves.
Bulb: Ovoid, about 6 or more cm in diameter, narrowed into a neck 1-1.5 cm long. Bulbs of H. crispus, unusually for winter rainfall species, have unequal tunics whose edges form horizontal layers, instead of the normal distichous arrangement.
Leaves: 1 to 3 (mostly 2) emerging soon after the inflorescence. The blade may be very narrow or broad, green or glaucous, 12-33 mm broad above the middle, narrowed gradually to 3-7 mm at the base, hairy or glabrous, suberect, lorate, canaliculate, much undulated or crinkled, ranging from throughout their length, to near the base only, 12-20 cm long. Only very rarely are the leaves smooth edged. The leafblades are often marked with maroon spots and bars on the lover surface. The leaf margins, is occasionally edged in red. Leaves of immature bulbs often lack the undulation seen in the mature bulbs.
Inflorescence (umbel): Dense, narrowly obconical, about (13-)20-35(-40) mm in diameter held on a 5-7.5(-15) cm tall scape. Pedicels 5-8 mm long (or shorter). Bracts 4-6, oblong, ascending, bright red; perianth about 12 mm long; tube very short; segments lanceolate; stamens much exerted, just reaching to the top of the bracts.
Fruits (berries): 1 to 2 cm in diameter, pale pink and pulpy when ripe, holding from one to four dark-red seeds.
Similar species. H. crispus may sometimes be confused with the equally narrow leaved Haemanthus pubescens subsp. arenicolus which grows sympatrically on the sandy coastal plain of Namaqualand. 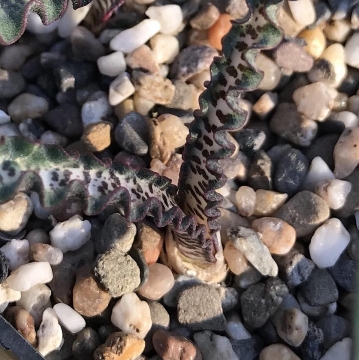 Haemanthus crispus Photo by: © Plantemania
Send a photo of this plant.

Cultivation and Propagation: Haemanthus crispus will make the most impact in a rockery or container in full sun or partial shade, protected from frost. As they are from the winter-rainfall region, they are best left dry during summer when they are dormant. Regular watering can commence in autumn, once they have started to sprout. They can be propagated from seed, bulb, cuttings and offsets.