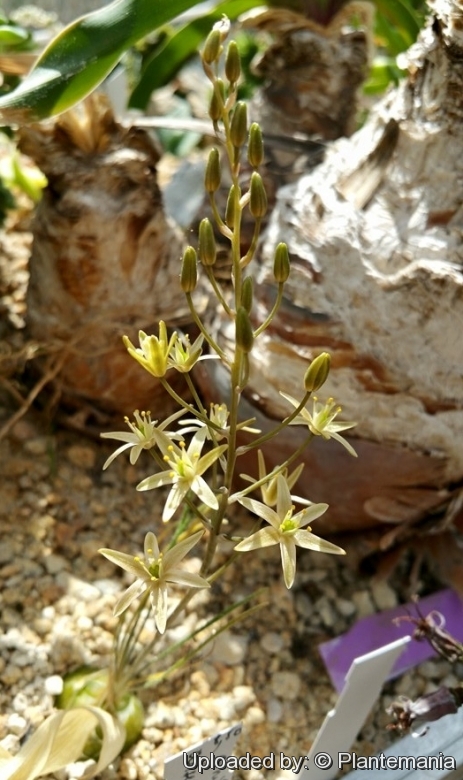 Ornithogalum adseptentrionesvergentulum Photo by: © Plantemania
It is a diminutive species with hairy (ciliated) leaves. It produces impressive numbers of charming blush-cream flowers with a quite reflective, sparkly appearance that open sequentially. Typical of this species is the jade green bulbs that often grow out of the ground.

Origin and Habitat: Ornithogalum adseptentrionesvergentulum is native to an area north of Laingsburg in the western end of the Great Karoo Desert of South Africa.
Habitat and ecology: Ornithogalum adseptentrionesvergentulum is a winter grower bulb, dormant in the summer. In some years when there hasn't been enough rain the bulbs will skip growing seasons and remain dormant, conserving their energy for better years. The climate is harsh there with hot days and freezing nights with an average of 150 mm precipitation per year, falling only in winter. To avoid deep frosts they inhabit hillsides that are covered in grey shale that get shade in the summer from the intense force of direct desert sunlight. Accompanying geophytes comprise: Drimia intricata, Geissorhiza karooica, Ixia marginifolia, Ixia rapunculoides, and Oxalis obtusa.

Description: Ornithogalum adseptentrionesvergentulum is one of the world's most miniature bulb species (with hairy (ciliated) leaves under 3-4 cm tall) and yet it has the one of the longest names of any plant in the world. It produces impressive numbers of charming blush-cream flowers with a quite reflective, sparkly appearance that open sequentially. Typical of this species is the jade green bulbs that often grow out of the ground.
Derivation of specific name: The specific epithet means “inclined towards the north”. In fact in habitat the leaves all lean to the north, hence its specific epithet, and blend in with the grey shale that surround them. But in cultivation its leaves haven't demonstrated quite so much determination to lean in a single direction.
Bulb: The bulb is more or less exposed (partially aboveground) and can reach 3-4 cm across.
Leaves: Wiry, with hairy (ciliated), 3-4 cm long.
Inflorescence: The inflorescens is near 10 cm high with numerous flowers in spring.
Flowers: Greenish to creamy, brown-blushing, sparkly faced.

Notes: The longest scientific name for a plant (i.e. binomial) is, probably Ornithogalum adseptentrionesvergentulum, at 38 letters. The shortest names include Poa fax, or scaly poa, a purplish flower native to Western Australia. And what about animals and bugs? The longest is apparently Parastratiosphecomyia stratiosphecomyioides, a fly, which is 41 letters in length. A bat, Ia io, has the honor of the smallest name.