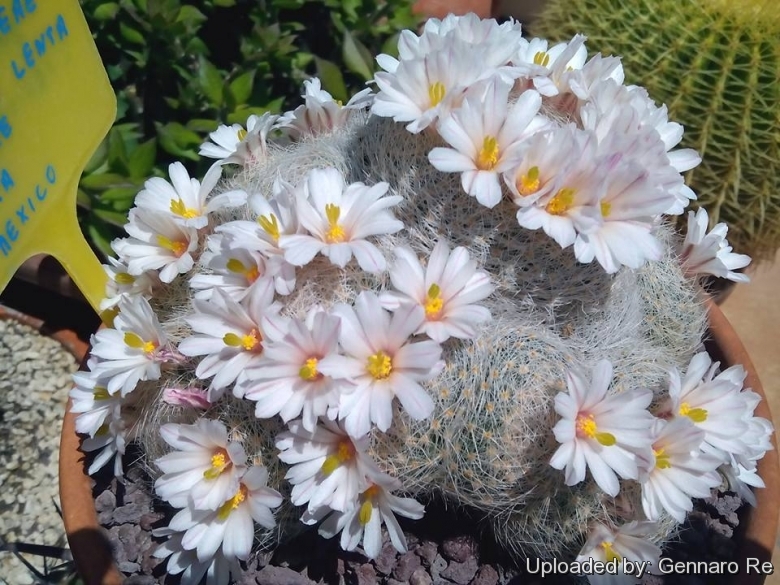 Mammillaria lenta Photo by: Gennaro Re
This is an attractive and rewarding cactus with dense criss-crossing white spines The slow growth rate but offsetting habit and unusual large flowers make it one of the most sought-after species and it is often a show winner.

Origin and Habitat: Coahuila, Mexico. (Type locality near Viesca). The species appears over a range of approximately 16,000 km2. Mammillaria lenta has a small number of subpopulations and is quite rare.
Altitude range. 900-1.800 metres above sea level.
Habitat: It grows and clumps in cracks on steep calcareous rock, in semi-desert shrublands. There is some illegal collecting, but it is not a significant threat. Goat overgrazing and trampling also represents a minor threat to this species.

Description: Mammillaria lenta is a very slow growing succulent that branches basally to form quite large flat-topped mounds of off-white to white with age. Some plants will begin to offset when just a few cm across, while others are more reluctant to produce offsets. Slower growing than the somewhat similar M. plumosa.
Roots: Large, tuberous.
Stems: Flattened globular (or small columnar in cultivation) without latex., almost hidden by the white delicate spines, bright green to yellow green, typically (3-) 5 to 10 cm in diameter, 1 – 2 (or more) cm high. Offsets may be produced low on the plant, or unusually high near the growing tip.
Tubercles: Slender conical, somewhat firm. In the axil there is short, persistent wool and occasionally a single bristyle.
Areoles: Naked.Parastichy number: 13 - 21.
Radial spines: 30 - 40, dense, fine, soft and close together giving the effect of looking like a bird's nest glassy white to slightly yellow, 3 - 7 mm long.
Central spines: Absent.
Flowers: Produces rings of large pure white flowers with a purplish-pinkish stripe, 20(-25) mm long and 25 mm in diameter. Stigmas are a bright olive-green. Perianth segment pointed.
Blooming season: April/May. Flowering may be reluctant unless it is placed in a warm position with high light levels.
Fruits: Clavate, red, up to 10 mm long.
Seeds: Dull black, diameter approx 1 mm.

Notes: This species has been referred to as related to Mammillaria sphacelata which is also found in the same type locality. 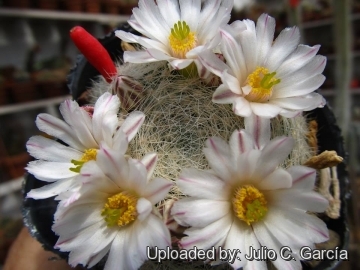 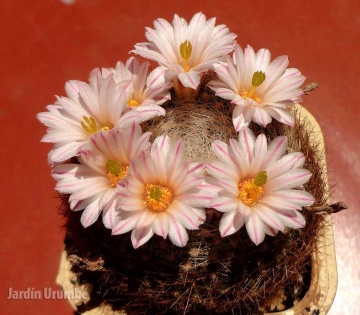 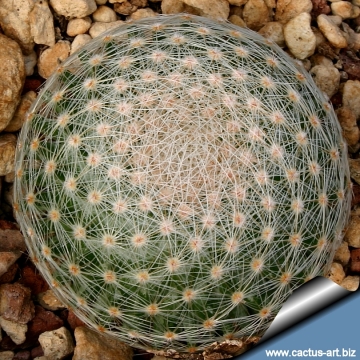 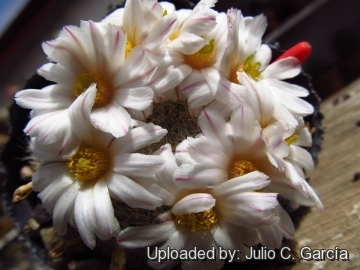 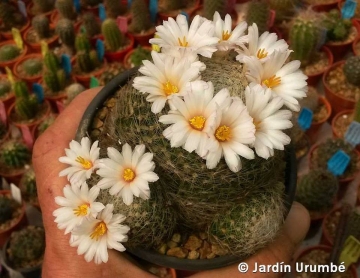 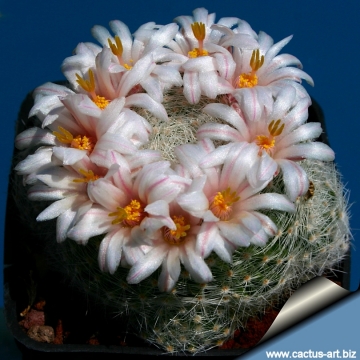 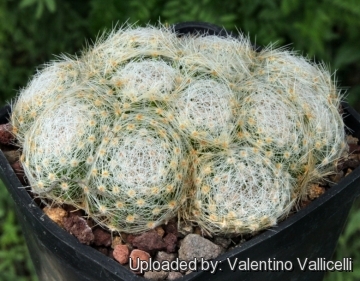 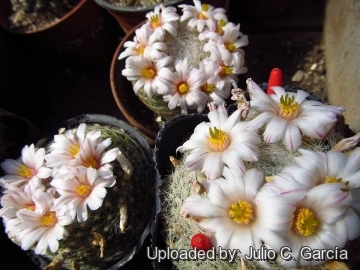 Cultivation and Propagation: It is a slow growing species. Use a pot with good drainage and a very porous mineral-based potting mix. Potted plants are quite wet-sensitive and easy to rot if over-watered, especially in winter. Water sparingly during the growing season; keep very dry in winter. Feed with a high potassium fertilizer in summer.
Usually it is recommended to over-winter this plant in a bright and warm greenhouse with at least 8-10° C , but it has proved to be quite frost resistant (if kept dry, it's hardy as low as -5° C). Outside full sun or afternoon shade, inside it needs bright light, and some direct sun. Some plants will offset readily, and clumps can be produced in a very few years.
Propagation: By direct sowing after last frost, or by cuttings or grafting.