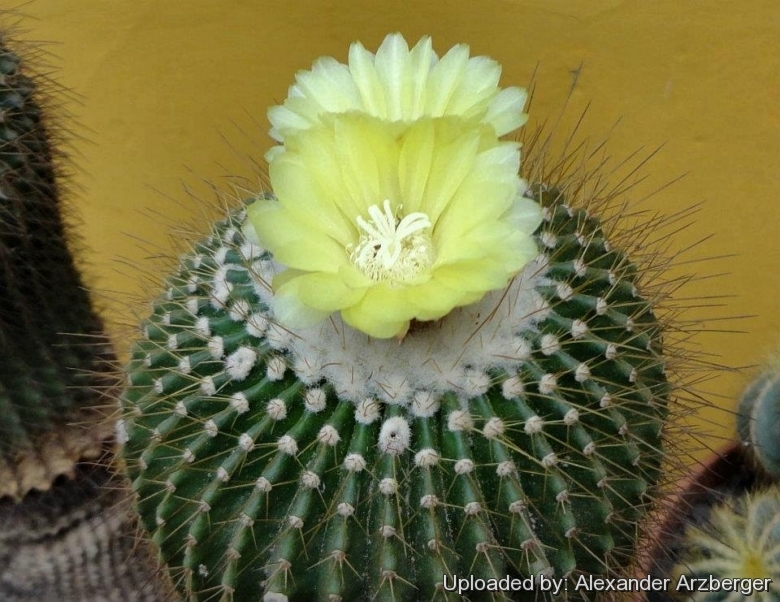 Description: Parodia ampliocostata, also known as Eriocactus ampliocostatus, is a local or morphological form of the very variable Parodia schumanniana (syn: Notocactus schumannianus), but not sufficiently differentiated and considered merely a local variant of the latter (if not the same). The key difference by which the two were separated, namely the presence of a higher number of ribs, larger rib height, higher spine number, different spine colour, multiple central spines, of which the lowest one conspicuously longer and pale yellow anthers, appear to fall within the natural variation of Parodia schumanniana and it should be synonymized with the latter.
The following description of this species is based on Eriocactus ampliocostatus F.Ritter 1979 sensu stricto (Collector's number referred here is FR 1182).
Stems: Cylindrical up 1.80 m long and 30 cm thick.
Ribs: 32-48, about 10 mm hight.
Areoles: Less woolly.
Marginal spines. about 5, gold or brown, later brown or grey, the lower pair up to 10 mm long, the uppermost unpaired, ca. 7 mm long or shorter.
Central spines: 3 (-4) the upper two ca. 10 mm long, the lower one up to the 3 cm long.
Flowers. 4 cm long, opening approximately 4.5 cm wide. Scales of the ovary, very narrow, about 5 mm long (3/4 of which consisting in a dark dry awn), wrapped by tight white woolly hairs, the upper scales each have a bristle in the axil. Tube about 10-12 mm long and 3-4 mm wide, yellow inside, funnel-shaped, campanulate to almost bowl-shaped, outside with brown hairs, and long awned scales. Perianth segments spatulate pale yellow to golden yellow ca 2 cm long
and 6-8 mm wide. Stamens pale yellow, 5-10 mm long, the lower upright, the upper bent inwards. Anthers pale yellow. Style light yellow, about 17 mm long, stigma-lobes 10-12 pale yellow ca. 6 mm long.
Seeds: Dark brown, a little smaller than in Parodia schumanniana, about 0.7 mm long, bell-shaped.

Subspecies, varieties, forms and cultivars of plants belonging to the Parodia schumanniana 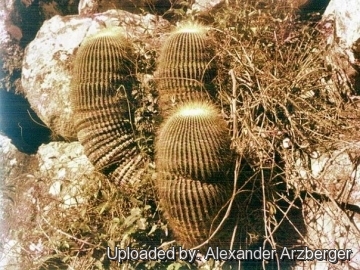 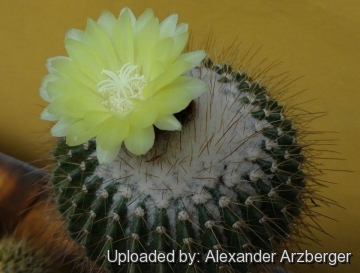 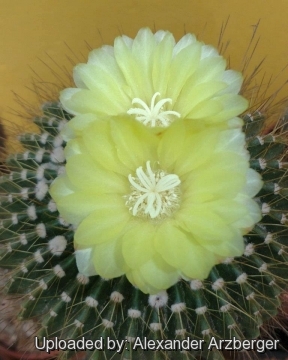