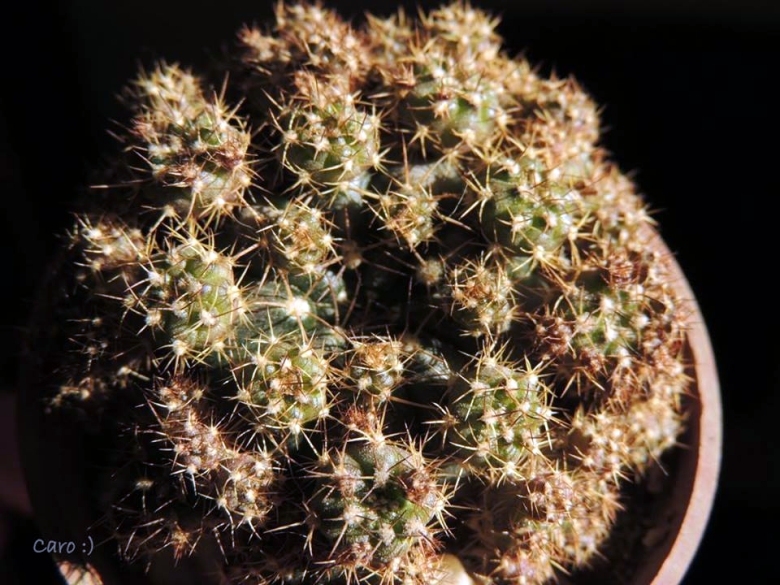 Origin and Habitat: Gymnocalycium anisitsii subs. multiproliferum grows in the southern Brazil.
Habitat and ecology: This species grows in a loamy soil, under scrubs and small trees, mostly in a light shadow. In times of drought often the plants retracts and appear almost completely buried in the ground. The population seems very healthy and the plants are very numerous. In the same area it is possible to find a rich variety of cacti comprising: Stetsonia coryne, Monvillea sp., Cleistocactus baumannii, Opuntia sp., Echinopsis sp. and Frailea melitae.

Description: Gymnocalycium anisitsii subs. multiproliferum (Gymnocalycium damsii var. multiproliferum) is one of the morphological or geographical form of the widespread and pretty variable Gymnocalycium anisitsii. This particular form distinguishes for its neat appearance and heavily branched habit, it produces pups like mad! A single stems produces dozen of small offshoots, almost one from each areolae. These offshoots come off at the minimal touch, and take root nearby readily forming dense colonies. Due to its ease of propagation it is becoming common in cultivation.
Stems: In cultivation the stems grows up to 10 cm tall, 8-10 cm in diameter (but usually they are much smaller in habitat) olive green to bronze and highly decorative. It produces small offshoots, almost one from each arele.
Tubercles: Rounder and scarcely raised.
Spines: Nearly useless in terms of defence.
Flowers: From the centre, funnel form, white to pale pink, up to 6 cm long. External tepals greenish whit reddish margins, internal tepals white to light pinkish. Tube thin.
Blooming season: It produces flowers almost continuously during the year.
Fruits: Oblong, reddish at maturity.

Subspecies, varieties, forms and cultivars of plants belonging to the Gymnocalycium anisitsii group

Gymnocalycium anisitsii is a very polymorphic species with a large range of variability. Two subspecies are recognized, the nominate form and subsp. multiproliferum. There seems to be very little justification for vars. centrispinum, rotundulum, torulosum and tucavocense. Gymnocalycium griseopallidum from the salt-pan desert area on the Bolivia-Paraguay borders may well be another variety or local form which has become adapted to the peculiar local conditions of that region. 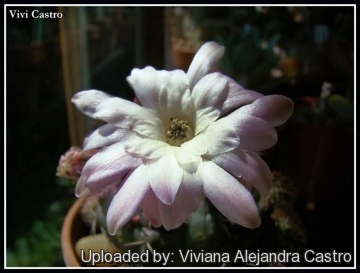 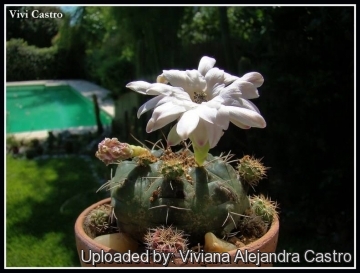 Cultivation and Propagation: Gymnocalycium anisitsii subs. multiproliferum is a summer grower species that offers no cultivation difficulties. Water regularly in summer (but do not overwater ) Keep this plant almost dry in winter at a minimum temperature of 0°C, prefer relatively rich substrate and low pH compost (if possible not limestone) otherwise growth will stop altogether. Feed with a high potassium fertilizer in summer. It is quite frost resistant if kept dry (hardy to -5° C) This plant needs plenty of space for its roots, repotting should be done every other year or when the it has outgrown its pot. This species is particularly easy and accommodating, seldom suffer of cryptogamic diseases.
Sun Exposure: Light shade. It may tolerate bright situations but is likely to suffer from sun scorch or stunted growth if over exposed to direct sunlight during the hottest part of the day in summer.
Propagation: Seeds cuttings.