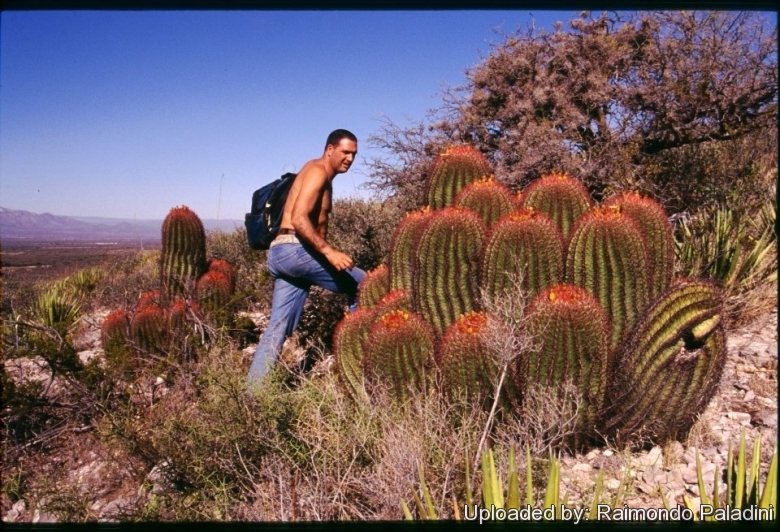 Ferocactus stainesii Photo by: Raimondo Paladini
Ferocactus stainesii (syn: Ferocactus pilosus) is a simple or clumping barrel/column cactus with thick red spines. In habitat plants must be a great age, often forming into quite massive groups, with several subsidiary barrels growing from the main one, with deep green bodies densely covered with bright red spines up its entire length. Most plants have bright red spines with bristle-like, but in some populations the white bristles are occasionally absent.

Origin and Habitat: Ferocactus stainesii (Ferocactus pilosus) is endemic to Mexico, where it occurs in the states of Coahuila, Durango, Nuevo León, San Luis Potosí, Tamaulipas, and Zacatecas. It occurs throughout much of the northern portion of the Mexican Altiplano and therefore is somewhat variable. This species is common. The estimated population size is more than 1,000,000 plants.
Habitat: This species is found in semi-desert on various soil types, but most often on rocky limestone hillsides. It is threatened by illegal collection of individuals from wild subpopulations. Removal of floral buds for human consumption could be affecting the populations.

Description: Ferocactus pilosus is still known by the commercial growers as Ferocactus stainesii, but most authors have dismissed Ferocactus stainesii as perhaps not worthy of even varietal status, suggesting that there is not really a fundamental difference between the two and this description can be applied to all the synonyms of the type species taxa.
Taxonomy note: Britton and Rose (1922, p. 124) placed stainesii in their new genus Ferocactus, and listed pilosus as a synonym, based on their interpretation of the rules of priority, but the priority of names are now reversed.
For more details see: Ferocactus pilosus

Subspecies, varieties, forms and cultivars of plants belonging to the Ferocactus pilosus group

Cultivation and Propagation: Ferocactus stainesii is one of the more common ferocacti in cultivation and quite resistant to cultivation. The only things that can kill this plant are cold and overwaterin. Nevertheless, it is appropriate to provide adequate growing conditions in order to obtain compact plant with dense spine cove.
Growth rate: Slow growing to start but does well under cultivation. They need to be moderately large (about 20 cm in diameter) before they flower.
Soils: Use a an open and free draining mineral compost with little organic matter (peat, humus) that allows therefore roots to breath (as it is rot prone).
Repotting: Repotting every 2-3 years.
Watering: It likes a winter's rest and should be kept completely dry during the winter months. From early spring onwards the plant will begin to grow and watering should be increased gradually until late spring when the plant should be in full growth. Water regularly during the aestival growth cycle so long as the plant pot is allowed to drain and not sit in a tray of water (this plant need plenty of water) But needs to be avoided wetting the bodies of these plants while they are in sunlight. A wet cactus in the sun light can cause sun burning which can lead to scars or even fungal infections and death. From late summer watering should be reduced to force the plant to go in to a state of semi dormancy, by autumn you should be back in to the winter watering regime. Keep dry with ample airflow in winter (but for outdoors cultivation it is somewat resistant to wet conditions, too if grown in very draining subtrata). In the rest period no high atmospheric humidity!! Care must be taken with watering as they tends to become swollen and untidy in growth habit if given too much water and shade.
Fertilization: Feed with a high potassium fertilizer in summer.
Hardiness: Keep dry at 5- 10° C in winter, but can tolerate sporadic light frost if kept on the dry side prior to, and during, cold weather.
Exposition: The plant tolerates very bright situations, if kept too dark they may become overly lush and greener and could be prone to rotting due to over watering. Strong light encourages flowering and heavy wool and spine production, but is likely to suffer from sun scorch or stunted growth if over exposed to direct sunlight during the hottest part of the day in summer. .
Uses: It is an excellent plant for container growing. But it is a very appreciated accent used to adds character to monotonous surroundings with little effort. Frequently planted close to the yellow spined Echinocactus grusonii.
Edible uses: Floral buds are collected for human consumption. The Mexicans eat it's flowers as a dessert fried with the frying pan with sugar.
Pests & diseases: It may be attractive to a variety of insects, but plants in good condition should be nearly pest-free, particularly if they are grown in a mineral potting-mix, with good exposure and ventilation. Nonetheless, there are several pests to watch for:
- Red spiders: Red spiders may be effectively rubbed up by watering the plants from above.
- Mealy bugs: Mealy bugs occasionally develop aerial into the new growth among the wool with disfiguring results, but the worst types develop underground on the roots and are invisible except by their effects.
- Scales: Scales are rarely a problem.
- Rot: This species is particularly easy and accommodating, seldom suffer of cryptogamic diseases. Rot it is only a minor problem with cacti if the plants are watered and “aired” correctly. If they are not, fungicides won't help all that much.
Propagation: Seeds are the only way of reproducing. Seeds (no dormancy requirement) germinate in 7-14 days at 21-27° C in spring), remove gradually the glass cover as soon the plants will be well rooted (ca 1-2 weeks) and keep ventilated, no full sun for young plants! The seedlings should not be disturbed until they are well rooted, after which they can be planted separately in small pots.