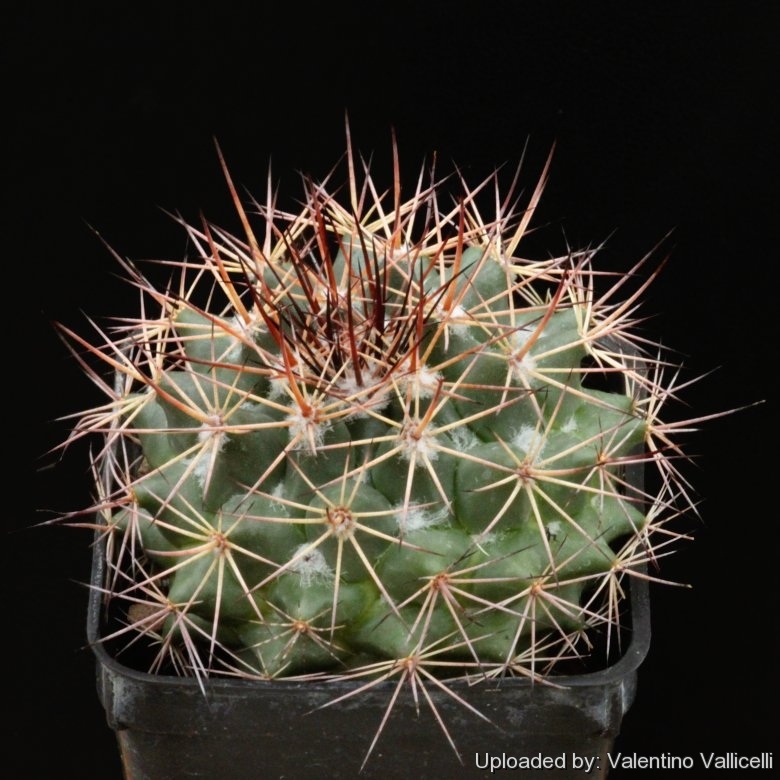 Origin and Habitat: Sonora, Sinaloa & Chihuahua, Mexico (Northern America). The species is widespread and common in the mountains.
Altitude range: 300 - 1.200 metres above sea level.
Habitat and Ecology: The species occurs in rocky slopes, cliffs, foothills and barrancas. Usually in partial shade under thorn scrubs, in low dry forest and in pine-oak woodlands. The species is cultivated, but there is no significant collection of wild populations. There are no threats to this species.

Description: Mammillaria sonorensis is a globular cactus solitary at first, later forming large mounds. The tubercles are keeled, firm, dull bluish-green with well-defined radial spines which are easily distinguishable from the centrals. It will reward the skilled growers with ring of deep pink flowers with darker midveins circling the crown of the plant.
Derivation of specific name: This member of the Cactaceae family was given this name for the occurrence in the Mexican state of Sonora.
Stem: Globose, apex depressed, simple or cespitose 6 - 8 cm or more in diameter. With latex.
Tubercles: Globular-triangular, not sharp angled, keeled, firm, dull bluish-green.
Areoles: Oval, woolly in youth; axils woolly, but with only occasional bristles.
Radial spines: 8 to 15, slender, needle-like, whitish to cream, with brownish tips, 1 - 20 mm long, upper ones shortest.
Central spines: 1 to 4, reddish-brown, awl- to needle-like, reddish brown, 5 - 45 mm long.
Flowers: Deep pink with darker midveins, to 20 mm long and in diameter.
Blooming season: Spring (March and April in habitat).
Fruit (berries): Club shaped, scarlet, to 12 mm long.
Taxonomic note: Mammillaria sonorensis is extremely variable in size and length of spine and tubercles, comprises several questionable varieties and its taxonomic history has undergone several changes. Craig segregated the varieties longispina, brevispina, gentry, hiltonii and maccartyi that were described in the "Cact. & Succ. Journ. of Amer.", Vol. XII: pg. 156. Contrary to Hunt et al. (2006) Mammillaria sonorensis is treated by “The IUCN Red List of Threatened Species” (2013) as a synonym of Mammillaria standleyi.

Cultivation and Propagation: In good conditions with careful application of water and excellent ventilation Mammillaria sonorensis grows without difficulty.
Growing rate: It is a slow growing species that rewards the patient grower with a beautiful displays of flowers since from an early age.
Soil: Requires good drainage provided by a very permeable open cactus soil (With not less than 50% grit content). Reduce the use of peat or other humus sources in the potting mixture.
Repotting: Repot every 2-3 years. Use small sized pots.
Feeding: During the beautiful season enrich the soil using a fertilizer rich in potassium and phosphorous, but poor in nitrogen, because this chemical element doesn’t help the development of succulent plants, making them too soft and full of water.
Watering: Water should be carefully applied and only when the soil is dry to the touch, as this cliff-dwelling species is very prone to root rot. Allow soil to drain thoroughly before watering again. Additionally, water should not be applied from above, as the feathery spines will retain water and add to rotting problems, but in good conditions with excellent ventilation, in bright light, it usually grows without particular difficulty. Do not water in the winter.
Light: Outside full sun or afternoon shade, inside it needs bright light, and some direct sun. Direct sun encourages flowering and heavy spine production.
Hardiness: Protect from frost. But it's hardy to -5°C if kept dry. A winter rest that allows the plant to shrivel (perhaps losing up to 25% of its summer height) will encourage flowering and long time survival.
Pests & diseases: It may be attractive to a variety of insects, but plants in good condition should be nearly pest-free, particularly if they are grown in a mineral potting-mix, with good exposure and ventilation. Nonetheless, there are several pests to watch for:
- Red spiders: Red spiders may be effectively rubbed up by misting the vulnerable plants every day
- Mealy bugs: occasionally they develop aerial into the new growth among the wool with disfiguring results, but the worst types develop underground on the roots and are invisible except by their effects.
- Scales: Scales are rarely a problem.
- Rot: it is only a minor problem with cacti if the plants are watered and “aired” correctly. If they are not, fungicides won't help all that much.
Propagation: Direct sow after last frost or (rarely) cuttings. Seeds germinate in 7-14 days at 21-27° C in spring, remove gradually the glass cover as soon the plants will be well rooted (ca 1-2 weeks) and keep ventilated, no full sun for young plants!