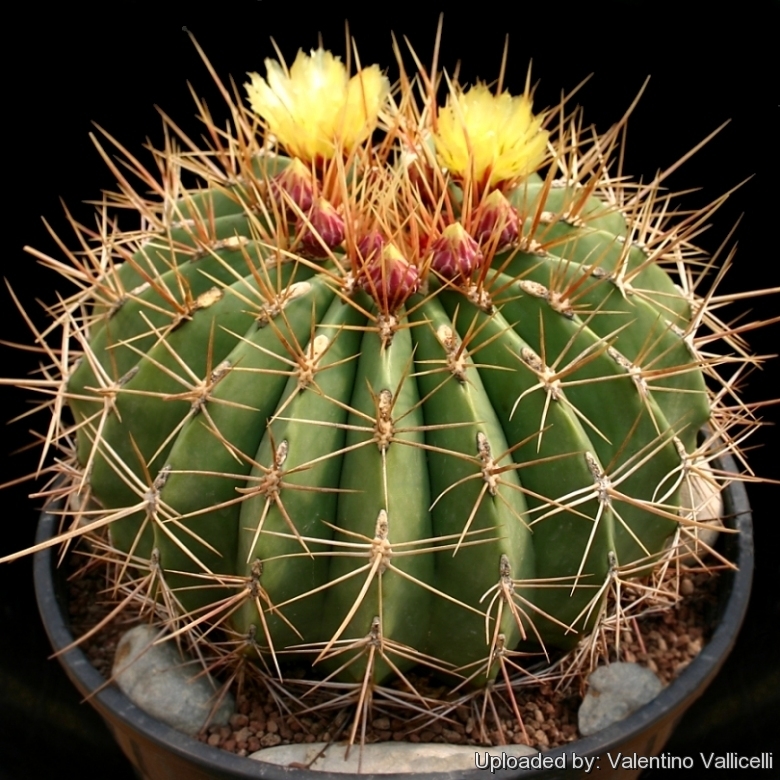 Echinocactus alamosanus (Ferocactus alamosanus) Photo by: Valentino Vallicelli
This rare and distinctive barrel cactus has relatively delicate spines for a Ferocactus, and is very hard to find a good size plant like this in cultivation.

Origin and Habitat: Ferocactus alamosanus ( comprising subsp. reppenhagenii) is known only on the western edge of the Sierra Madre Occidental in the Álamos area in southeastern Sonora and adjacent Chihuahua (atates of Chihuahua, Sinaloa and Sonora, Mexico).
Altitude: 450-1300 metres above sea level.
Habitat and Ecology: The species occurs in upper tropical deciduous forests up to pine-oak forests. Known only from a restricted area this species is not very common and is said to be heading for endangered species list. It has a small number of populations (less than 10 locations). The habitat of Ferocactus alamosanus is home to succulent flora and is particularly rich in local endemics such as: Echinocereus subinermis, Echinocereus stoloniferus and Marshallocereus thurberi.

Description: Ferocactus alamosanus is small barrel cactus, usually solitary but sometimes clumping.
Stem: Depressed globose to shortly cylindrical, up to 30 cm in diameter, 25 cm tall, occasionally much taller;
Ribs: 12-20 narrow, acute ribs.
Spines: Needle-like. Densely intermeshed with a reddish tinge in the new growth
Central spine: 1, sometimes flattened, up to 6 cm long;
Radial spines: 8, straw-coloured, 3 to 4 cm long .
Flowers: Wide open greenish yellow, up to 45 mm long, 35 mm in diameter. The petals are spatulate and broad.
Fruits: Dull brown-red fruits splitting open when ripe.
Remarks: This species has been considered a variety of Ferocactus pottsii (Salm-Dyck) Backeb., but based on morphology and habitat they are best considered as separate species. Therefore Ferocactus pottsii does not belong to the complex with Ferocactus alamosanus. It has to be excluded here and transferred in the group with Ferocactus emoryi etc. Two subspecies are recognized, the nominate form and subsp. reppenhagenii (G.Umger) N.P.Taylor. The subspecies 'alamosanus' has usually about 20 acute ribs, heavy spination, and only grows to 25 cm high. The subspecies 'reppenhagenii' has 12-18 rounder ribs and connecting areoles and will grow up to about 70-100 cm). 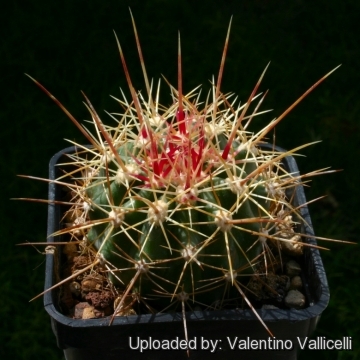 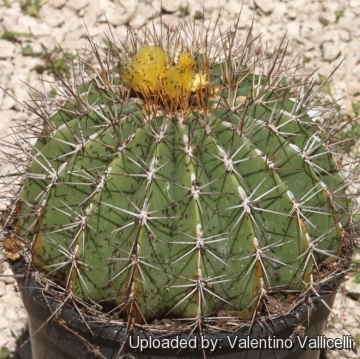 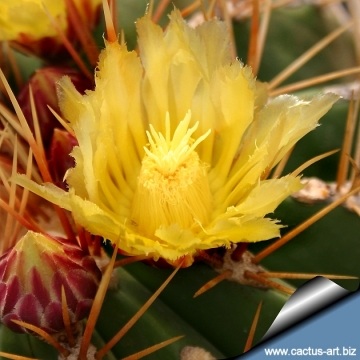 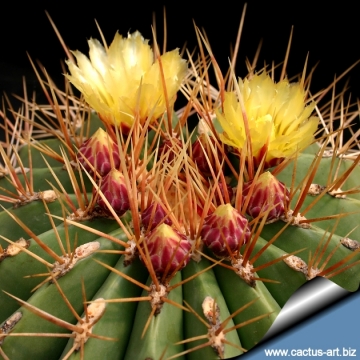 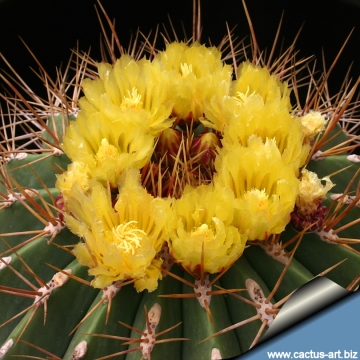 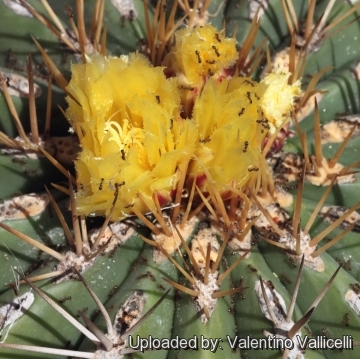 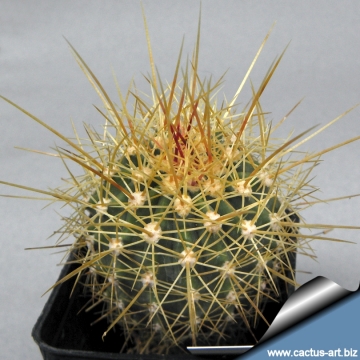 Cultivation and Propagation: They are summer-growing and pretty easy plants thought slow to start. They are suited for any rich, well drained soil such us clay, pumice, lava grit, and only a little peat or leaf-mould. If potted, repot them preferably in the spring, if their roots become cramped. Generally, they should be repotted every other year in order to provide fresh soil. However, this doesn't necessarily mean they'll need larger containers. Fill about a quarter of the pot with broken crocks, gravel, etc. to promote good drainage. After repotting, do not water for a week or more. Water regularly during the aestival growth cycle (this plant need plenty of water, but do not overwater and let their soil dry out between waterings), and also needs to be avoided wetting the body of this plant while it is in sunlight. A wet cactus in the sun light can cause sun burning which can lead to scars or even fungal infections and death, keep rather dry in winter. No water should ever be allowed to stand around the roots. Feed with a high potassium fertilizer in summer.
Exposure: Outside they need a bright exposure, full sun or half shade in summer if the location is exceedingly hot or bright, inside needs bright light, and some direct sun. It can tolerate moderate shade, and a plant that has been growing in shade should be slowly hardened off before placing it in full sun as the plant will be severely scorched if moved too suddenly from shade into sun.
Frost Tolerance: Light frost protection required for safe cultivation, but can tolerate sporadic light frost. This plants need a period of cool rest in winter to produce flowers abundantly.
Diseases and pests: Watch for infestations of mealybug, scale insects and spider mite. Plant in good conditions will start to bloom when reach the diameter of only 15-18 cm.
Propagation: Seeds are the only way of reproducing.
Seed Collecting: Permit fruit to ripen. Fruit must be significantly overripe before harvesting seed; clean and dry seeds