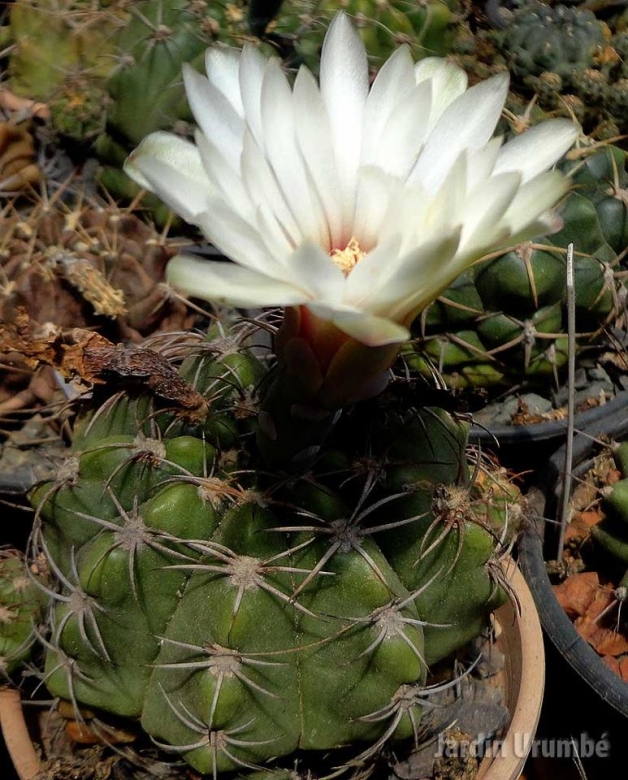 Description: Gymnocalycium paraguayense f. fleischerianum (Gymnocalycium fleischerianum) is quite variable and is generally included within (as a synonym of) Gymnocalycium paraguayense but it has deeper green glossy stems with wider, more rounded ribs lacking the transverse furrow, more spines (up to 9 or more per areole), longer and thinner somewhat curved and close to the body. Sometimes it is incorrectly labelled as a variety of Gymnocalycium denudatum under various names. Older plants producing offshoots from base, building small groups or mats. The flowers are white with purplish-pink throat, funnel-shaped, 4-6 cm long.
Stems: Flat-globular to globular (during the dry season sometimes sunken into the soil) 4-10 cm in diameter, often more or less cylindric in cultivation. Epidermis dark glossy green.
Ribs: 5 to 13 (usually 6-8), rounded, with no or little undulation from tubercles on vertical clefts and tubercles not clearly defined (furrow on the rib between areoles absent).
Areoles: Approximately circular with white to pale brownish wool.
Spines: 5-11(-13) but Backeberg (1959) mentioned up to 20 spines per areole, these are up to 2.5 (or more) cm long, curved towards the body or prominent, not clearly differentiated into centrals and radials. Bristle-like, yellowish at first, later greyish.
Flowers: Funnel-shaped to 4-6 cm long, 3.5 cm white with deep pink throat. Pericarpel 1-2 cm long, 5-7 mm in diameter; pericarpel scales with light margin and sometimes pinkish tip. Perianth segments numerous, rounded, truncate, cuspidate or apiculate. Style whitish, with pale yellow stigma 20-35 mm long. Stamens purple-pinkish, to whitish at the apex, pollen straw-coloured. The form of the perianth segments is highly variable between populations and the form of the flower - broad or slender – is also varied. Most plants are dioecious and autosterile.
Fruit: Almost spherical to club-shaped 1.5-4 cm long, softening but not splitting when ripe, and dissolves when touched, light to dark green, sometimes bluish (colour depends on the amount of epidermal wax).
Seeds: Seed oval to broadly oval, reddish to dark brown or nearly black, 1-1.6 mm black with conspicuous pale hilum. 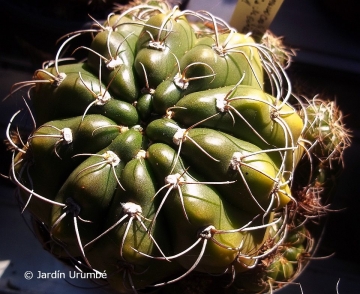 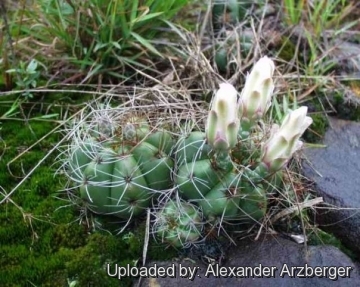 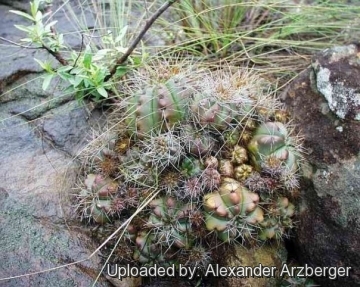 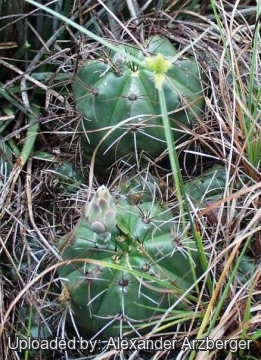 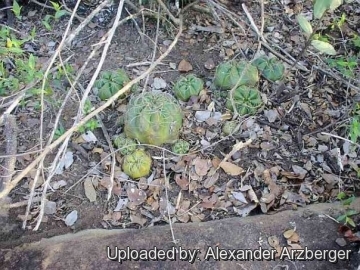 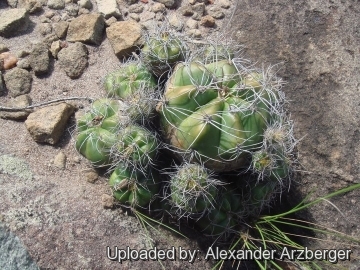 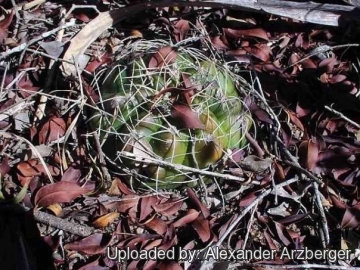 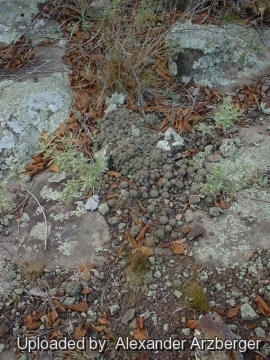 Cultivation and Propagation: Gymnocalycium paraguayense f. fleischerianum is a summer grower species that is easy to cultivate.
Growth rate: It is a relatively rapidly growing and easily flowering species that will make clumps given the best conditions.
Soils: It likes very porous standard cactus mix soil. pH neutral or acidic, avoid substrata rich in limestone.
Repotting: Use pot with good drainage.
Watering: Needs moderate to copious waterings in summer, but do not overwater (Rot prone), keep dry in winter.
Fertilization: Feed with a high potassium fertilizer in summer.
Hardiness: Reputedly somewhat resistant to frost if kept on the dry side prior to, and during, cold weather (hardy to -5 C ° C, or less for short periods).
Exposition: Outside bright but filtered sunlight or afternoon shade, inside it needs bright light, and some direct sun. Tends to bronze in strong light, which encourages flowering and heavy spine production.
Uses: It is an excellent plant for container growing. It always looks good and stays small. It look fine in a cold greenhouse and frame or outdoor in a rockery.
Pests & diseases: It may be attractive to a variety of insects, but plants in good condition should be nearly pest-free, particularly if they are grown in a mineral potting-mix, with good exposure and ventilation. Nonetheless, there are several pests to watch for:
- Red spiders: Red spiders may be effectively rubbed up by watering the plants from above.
- Mealy bugs: Mealy bugs occasionally develop aerial into the new growth among the wool with disfiguring results, but the worst types develop underground on the roots and are invisible except by their effects.
- Scales: Scales are rarely a problem.
- Rot: Rot it is only a minor problem with cacti if the plants are watered and “aired” correctly. If they are not, fungicides won't help all that much.
Propagation: Division, direct sow after last frost. Seeds germinate in 7-14 days at 21-27° C in spring, remove gradually the glass cover as soon the plants will be well rooted (ca 1-2 weeks) and keep ventilated, no full sun for young plants! To make a cutting twist off a branch and permit it to dry out a couple of weeks, lay it on the soil and insert the stem end partially into the soil. Try to keep the cutting somewhat upright so that the roots are able to grow downward.