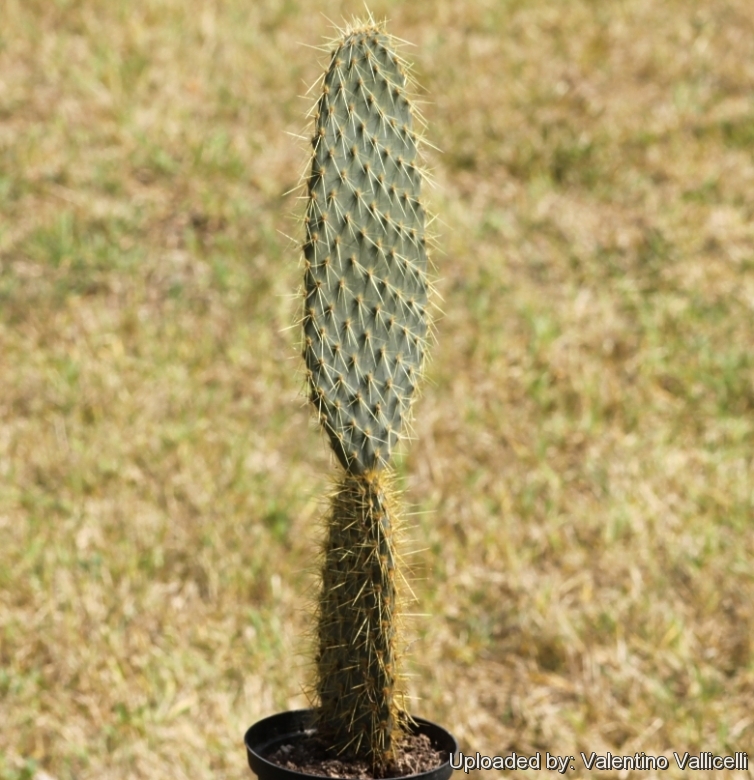 Origin and Habitat: Galapagos Archipelago, Ecuador. It is present in Darwin,Wolf, Pinta, Pinzón, Rábida, Santiago, Isabela, Santa Cruz, Santa Fé, Marchena and Genovesa islands.
Altitude: From sea level up to 1500 metres above sea level.
Habitat: It grows across all of the Galápagos islands in dry forest mostly in the arid zone near sea level and lowlands in the Galapagos Islands, but also at higher . It is common in some places, but some of the subpopulations are very scarce and have undergone significant reductions in the past due to the impacts of various threats. However, overall the species as a whole is fairly common and is sufficiently secure on many of the islands.
The variety Opuntia galapageia var. galapageia (sensu stricto) is found only near sea level on Bartolome (Bartholomew), Pinta (Abingdon), San Salvador (James or Santiago) and possibly on some of the smaller islands.
Ecology: This Opuntia forms the principal article of food for the Galápagos land tortoise (Chelonoidis nigra). The long necks and limbs enables the tortoise to browse the tall Opuntias that grows in the arid environments. Tortoises acquire most of their moisture from the dew and sap in vegetation (particularly the Opuntia); therefore, they can survive long periods without water.

Description: Opuntia galapageia is a a very variable perennial prickly pear species, sometimes low and creeping, but often becoming very large, arborescent and arboreal, 2,5-5(or more) meters high, with a well-developed, large top either open or very compact and rounded. It show a great range of variation in habit, armament of joints, and character of spines. The greatest range of spine characters is shown between the young plants and old ones and between the trunk and the joints. These differences are very marked, but seems to be of little value. Opuntia galapageia has received numerous names (at least 16), representing no more than local phenotypes, of which only three varieties are usually recognized: Opuntia galapageia var. galapageia on Bartolome, Santiago and Pinta, Opuntia galapageia var. macrocarpa on Pinzon and Opuntia galapageia var. profusa on Rabida, but also these varietal names are not accepted by some botanists that treat them as synonyms, thus Opuntia galapageia should be the one and only Opuntia species recognized as occurring on the Galápagos islands. All the species and varieties listed as synonyms were previously recognized as good taxa, but they are now all excluded as they are combined under this single species concept.
Trunk: At first very spiny and made up of flat joints set end to end, with the short axis of each joint at right angles to that of the adjacent joint, in time becoming terete, and when old some-what woody, nearly naked, 30 to 130 cm in diameter; bark of old trunks smooth, covered with reddish-brown or reddish black platelets and peeling off in thin layers. The trunk becomes thicker than that of any other known species of the genus.
Cladodes (Joints): Orbicular, oblong or obovate, fleshy, usually very large, 15 to 38 cm long, 15-27 cm wide, 1-3,5 cm thick, very spiny, green to yellow-green, 22-38 cm long.
Areoles: Large, 2-7 mm broad, typically 2,5-3,4 cm apart, often prominent on the trunk, there especially forming knobs bearing numerous spines. Trichomes few to many, to 4 mm long
Glochids: Few or absent.
Leaves: Conical, large, 2-9 mm long, nonpersistent, usually not obvious.
Spines: 5-35, extremely variable (dimorphic), but nearly all straw-yellow (but also orangish, brown, or white), becoming reddish or brownish white; few on young joints of vigorous plants, very stout, pungent, long and rigid, very unequal, the longest 7 to 8 cm long; joints of old plants bearing several, erect, more or less pungent bristles or sometimes very weak soft hairs instead of spines, 2,5-7,5 cm long, while the spines from the trunks often are very stout and sometimes 40 in a cluster.
Flowers: Solitary, diurnal, yellow or orange, 4-7,5 cm long, 3,5-6 cm broad. Ovary more or less tuberculate. Inner perianth parts yellow, 1,7-4 cm long. Stamens numerous.
Fruit: A berry, globose to oblong, 2-6 cm long, 2-4 cm in diameter, fleshy with numerous seeds, green to yellowish green or brownish, sometimes borne in the ends of joints, more or less spiny with a few glochids.
Seeds: Large, 5 to 6 mm broad, white to light brown, covered with soft hairs, 2-5 mm long.

Subspecies, varieties, forms and cultivars of plants belonging to the Opuntia galapageia group 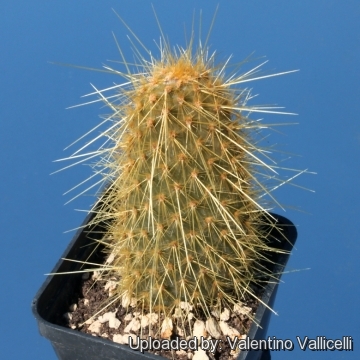 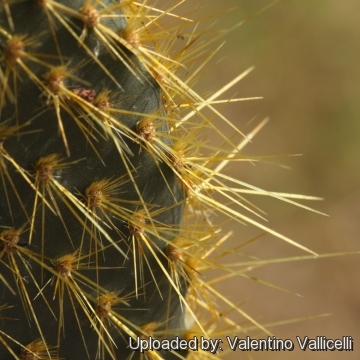 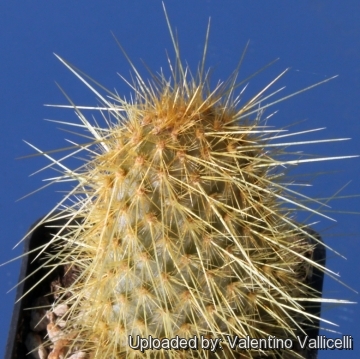 Opuntia galapageia Photo by: Valentino Vallicelli
Send a photo of this plant.

Cultivation and Propagation: Opuntia galapageia is a tropical summer-growing and easy cactus to grow. It makes great potted specimens.
Growth rate: It grows well, though slowly, but it possible to increase the speed of growth to some extent by providing adequate amount of water, warmth, and an all-purpose liquid fertilizer diluted half strength during the active growing season, but it’s susceptible to rotting if too wet. The plants will offset readily, and large clumps can be produced in a few years. It will fill a large pot or pan in time however, so space is needed if it is to show of its best.
Soil: It needs a very porous, slightly acidic potting medium (add pumice, vulcanite, and perlite). Outdoors it does well on poor, rocky soils.
Exposure: It likes a sunny position also blasting sun in summer. If grown indoor provide 4 to 6 hours, or more, direct morning or afternoon sun.
Aerosol salt tolerance: It is very salt resistant and may be grown near the sea.
Wind resistance: It endures strong winds.
Watering: It should be watered regularly in Summer allowing to dry before watering again and kept drier in Winter. It is very drought-tolerant, but seems to do better with a little more water than most cacti.
Hardiness: It can be grown outdoors in frost-free climates, needs anyway to kept above 12 °C and dry in winter. But it can tolerate temperatures down to 5° C (or even 0° C) for very short periods if very dry and ventilated. During winter month, put them in a cool luminous place and encourage them to enter winter dormancy by withholding water and fertiliser over the winter as they will etiolate, or become thin, due to lower levels of light.
Maintenance: Repot every two years. Needs lots and lots of space to grow, use large shallow container or bowl filled with very porous compost. It like pots with generous drain holes.
Ornamental uses: The striking arboreal growth form and minimal care required make this an excellent landscape accent plant on dry sites. It is also a robust plant that helps to stabilize poor soils. Young specimens do well as pot plants if given at least 5 hours of direct sunlight each day.
Edible uses: The sweet fruits may be eaten fresh.
Pest & diseases: They are susceptible to fungal diseases if overwatered, but are not nearly as sensitive as many other cacti, especially in warm weather. If kept damp through cold periods, they will invariably suffer.
Propagation: Seeds or cuttings. The seeds may be germinated and grown in containers. Their main requirements consist of high humidity levels, free-draining soil mix, and enough water, light, and nutrition.