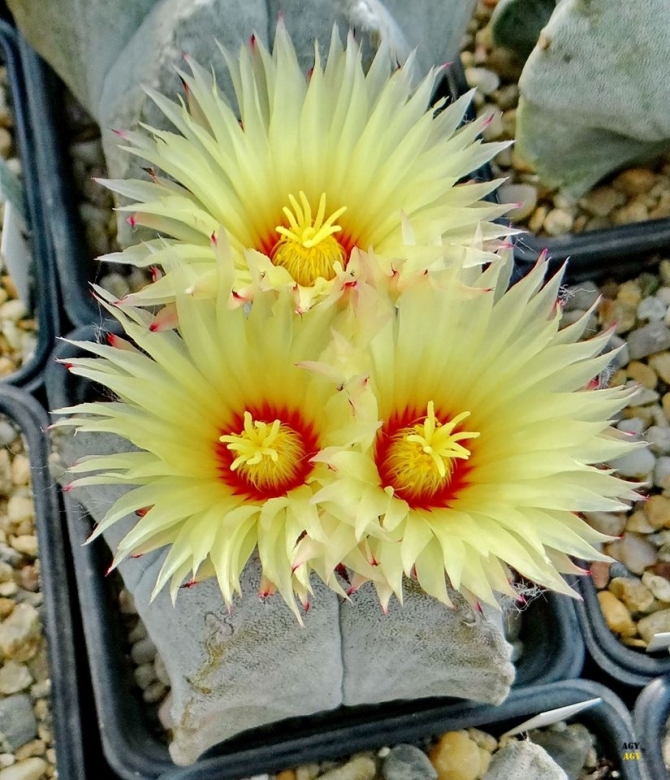 Origin and Habitat: Astrophytum coahuilense is narrowly distributed in the south-westernpart of the state of Coahuila and Durante (Ciudad Lerdo, Sierra Baicuco, western Sierra Parras and southern of this line up to the Sierra of El Numero), Mexico. Extent of occurrence less than 6,000 km². It is known from three locations that are severely fragmented.
Altitude range: 1100-1600 metres above sea level.
Habitat: They inhabit preferentially sunny south and east slopes on lime formations, rarely grow in north or west position between white grey rock in a loose to thick vegetation, which mainly consists of a dry bush community (xerophytic shrubland) together other cactus species such as: Ariocarpus lloydii and Thelocactus wagnerianus. The soil, consist mainly of lime gravel and sand with isolated humus feedthroughs. There is continuing decline in the quality of the habitat due to overgrazing. In addition, the number of plants is declining due to illegal collection. Furthermore, it does not occur in any protected area and is listed as Vulnerable.

Description: Astrophytum coahuilense with five ribs, has a surprising similarity to Astrophytum myriostigma. However, it is different in all characteristics regarding flower, fruit, seed and embryo which looks like in all details to Astrophytum capricorne. The differences into flower, fruit, seed and embryo and flecks are constant and permit in any case to distinguish A. coahuilense without problems from A. myriostigma.
Nude plants as in the case of A. myriostigma are unknown.
It looks like the bishop's cap (A. myriostigma), but softer, more grey flecks that cover the plant even more than with the myriostigma. The flowers are yellow with a characteristic red throat, although can appear pure red or very seldom pure yellow. In the fruit which is red till olive-green coloured and basal opening are up to 200 seeds, similar as in the case of Astrophytum capricorne. This plant is more related to the Asterias/capricorne group than the myriostigma.
A. coahuilense and A. myriostigma when cross-pollinated are fruitless: they are (usually) sterile by each other.

Subspecies, varieties, forms and cultivars of plants belonging to the Astrophytum coahuilense group 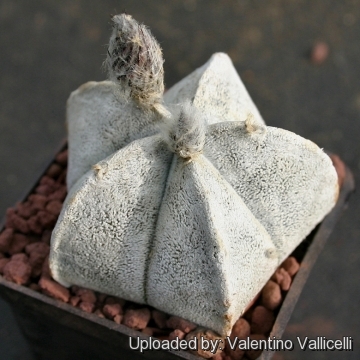 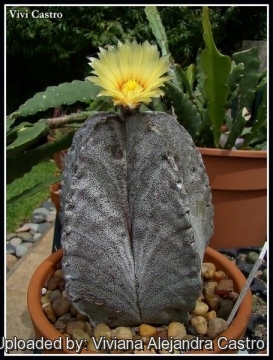 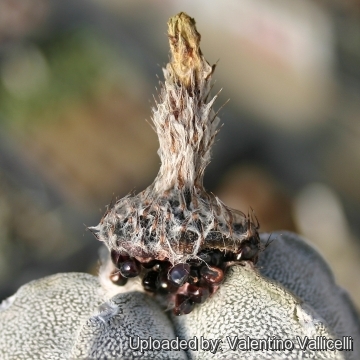 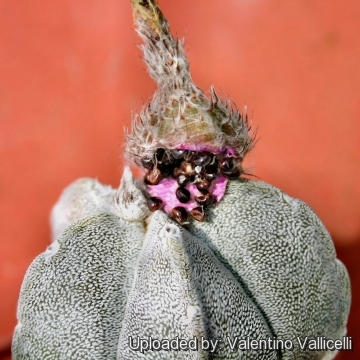 The fruit of A. coahuilense is pinkish and opens basally, it is very different from the fruit of Astrophytum myriostigma. Photo by: Valentino Vallicelli 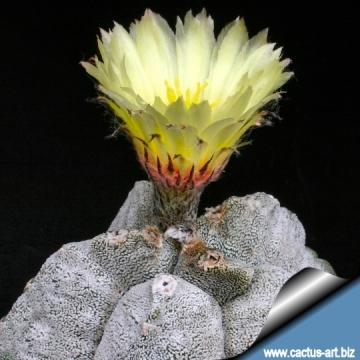 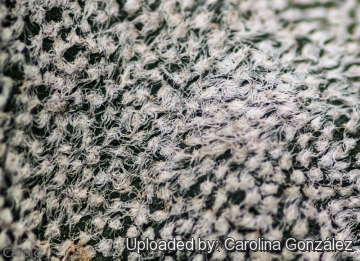 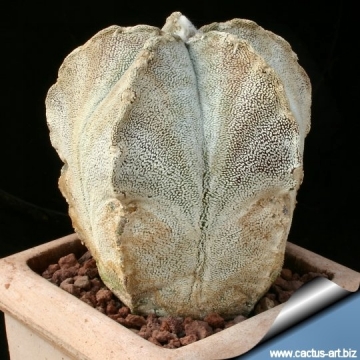 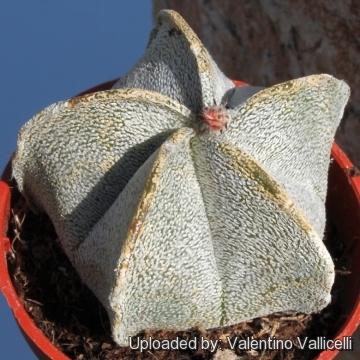 Cultivation and Propagation: It is not too difficult in a greenhouse, although grows quite slowly. The plants need a loose well-drained mineral soil. They need a good amount of light. Watering can be done weekly during summertime, if the weather is sunny enough, with a little fertilizer added. Kept this way, plants will show a healthy, although slow growth. They are frost hardy to -4° (-10°) C
Propagation: By seeds, remembering that seedlings dislike strong light and dry conditions and need to be repotted frequently. Eventually, as they become mature, they attain a maximum size of 8-10 cm (20) cm. However, old plants become senile and have a tendency to succumb to disease and a weak root system. At this stage, as is well known, they die suddenly. So, after they reach 10 cm in diameter grow them slowly, and adopt a new repotting period, using intervals of every 2 - 3 years. Additionally grow them under drier conditions or with stronger sunlight. But plants are often grafted to accelerate growth as they would generally take at least a five years to reach maturity on their own, but the grafted plants are typical rather tall growing, compared with plants on their own roots that are usually more flat to the ground.