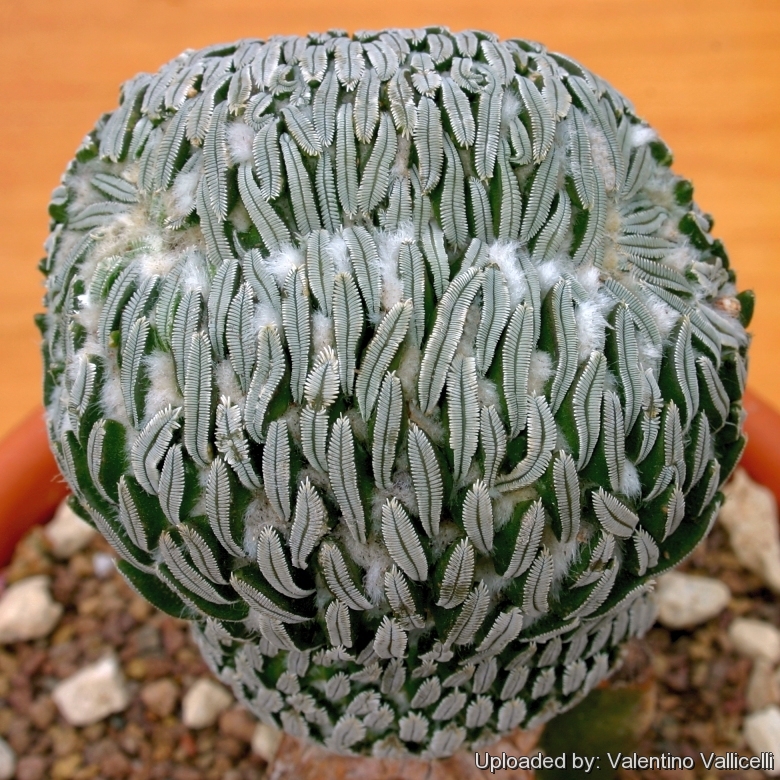 Pelecyphora aselliformis f. cristata Photo by: Valentino Vallicelli
This species is a rarity every cactus impassioned would like to have. The appeal lies in the peculiarly-shaped tubercles and spines, plus the challenge of growing it successfully.

Description: The typical Pelecyphora aselliformis (commonly known as the "Hatchet Cactus") is among the most famous of all cacti for is unique shaped stem.
Crested form: Pelecyphora aselliformis f. cristata only deviate from the standard species for the stem which is fan shaped up to 10 cm (or more) long with age.
Habit: Pelecyphora aselliformis is a small very slow growing clustering cactus
Stem: Spherical to shortly cylindrical, 5-10 cm tall, 2-5 cm in diameter. The stem in young plant is quite different, very thin, pencil-like or clavate.
Tubercles: Laterally flattened, elongated, arranged in spirals.
Areoles: Oval shaped areoles. Areoles in this species are clearly dimorphic, much as in the mammillarias, but the vestigial groove is reminiscent of Coryphantha and related genera.
Spines: 40 to 60 pectinated.
Flowers: Pink to violet flowers with lighter outside petals, 2-3,5 cm in diameter. The floral buds are acuminate and appear on the apex.
Fruit: Dry, papery.
Seeds: Brown, curved and reticulate.
Blooming season: It normally flowers from February till October, but only if the sunlight is strong enough.

Subspecies, varieties, forms and cultivars of plants belonging to the Pelecyphora aselliformis group 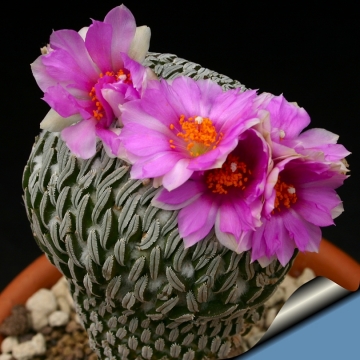 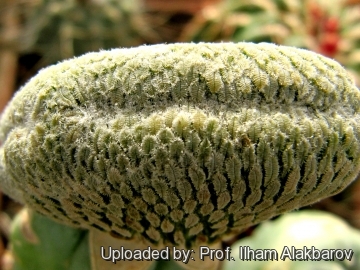 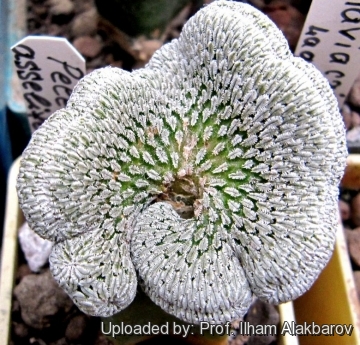 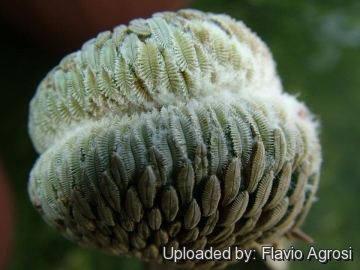 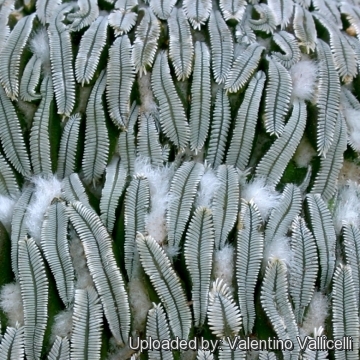 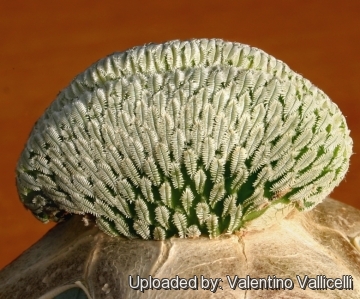 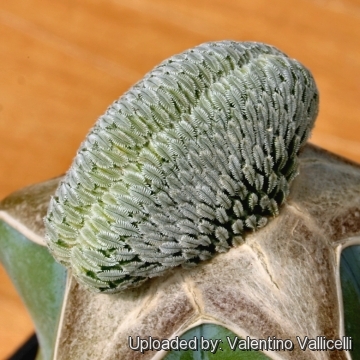 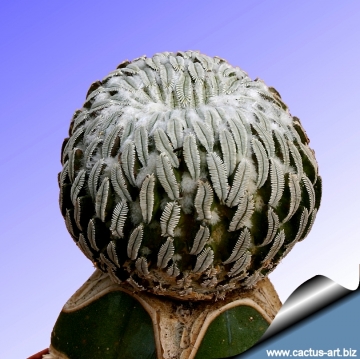 Cultivation and Propagation: Although regarded as a choice and difficult plant is not too difficult in a greenhouse, although grows quite slowly.
Soil: Use mineral well permeable mineral soil with little organic matter (peat, humus).
Exposure: They need a good amount of light shade to full sun this help to keep the plants healthy, although slow growth.
Watering: Water sparingly from March till October (weekly during summertime, if the weather is sunny enough) , with a little fertilizer added. Less or no water during cold winter months, or when night temperatures remain below 10° to prevent root loss. It is sensitive to overwatering (rot prone).
Fertilization: Feeding may not be necessary at all if the compost is fresh then, feed in summer only if the plant hasn't been repotted recently. Do not feed the plants from September onwards as this can cause lush growth which can be fatal during the darker cold months.
Hardiness: Keep perfectly dry in winter at temperatures from 5 to 15 degrees centigrade. (but it is relatively cold resistant and hardy to -5° C, or possibly colder for short periods) In the rest period no high atmospheric humidity!! (Temperature Zone: USDA 9-11)
Crested growth: Unlike 'monstrose' varieties of plants, where the variation from normal growth is due to genetic mutation, crested growth can occur on normal plants. Sometimes it's due to variances in light intensity, or damage, but generally the causes are unknown. A crested plant may have some areas growing normally, and a cresting plant that looks like a brain, may revert to normal growth for no apparent reason. If you have any of the crested part left you need to remove the normal growth and leave the crested part behind this will need to be done regularly.
Propagation: Grafting or cuttings. It is often grafted because difficult and slow to grow on its own roots. Plants are usually grafted onto column-shaped cacti but proved to be able to produce their own roots if degrafted. Cuttings will take root in a minimum temperature of 20° C (but better in hot weather). Cuttings of healthy shoots can be taken in the spring and summer. Cut the stem with a sharp, sterile knife, leave the cutting in a warm, dry place for a week or weeks (depending on how thick the cutting is) until a callus forms over the wound. Once the callus forms, the cutting may be inserted in a container filled with firmed cactus potting mix topped with a surface layer of coarse grit. They should be placed in the coarse grit only; this prevents the cut end from becoming too wet and allows the roots to penetrate the rich compost underneath. The cuttings should root in 2 to 6 weeks. Large crested piece must be placed on the soil surface without burying the plant base down in the soil.