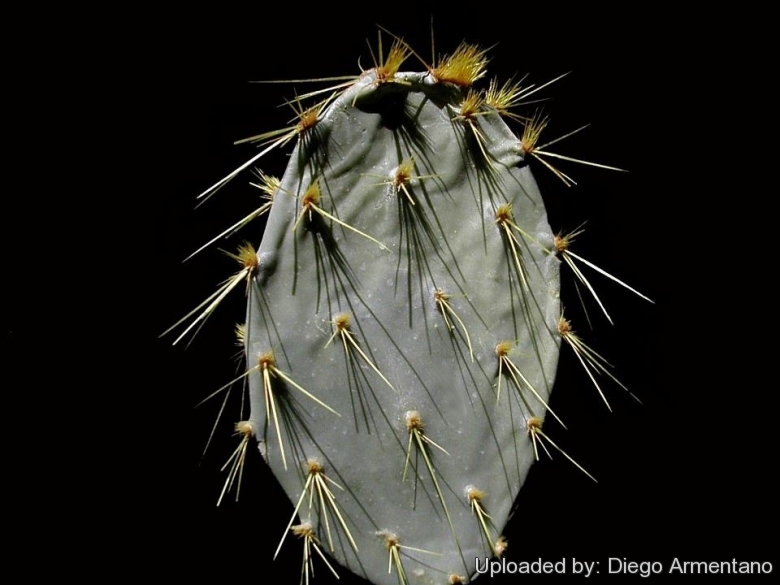 Opuntia engelmannii var. cyclodes Photo by: Diego Armentano
A typical areole's armor consists of 1 large, flattened spine 18-45 mm long, plus occasionally one or two additional shorter spines below which are only 8-10 mm long; but some specimens show up to 4 of the larger spines spreading downward and 2 of the lower, shorter ones. All spines are yellow and deflexed (pointing downward).

Origin and Habitat: Northern Texas (Chisos Mountains) and New Mexico (Big Bend to near Anton Chico) and back down to Stein's Pass, where the northern limit passes into Arizona.
Habitat and ecology: Opuntia cyclodes occurs in rocky, mountainous locations and in flat, sandy areas where it forms large populations.

Description: Opuntia engelmannii var. cyclodes (syn: Opuntia cyclodes) is a little known species, with sparsely spiny pads, first found by Bigelow near Anton Chico, New Mexico. It was described as a variety of Opuntia engelmannii. The key difference by which Opuntia cyclodes was separated, namely the smaller, globose fruit with larger seeds and fewer and shorter spines on the joints, together with a much spreading bushy habit, only 90-150 cm high and usually wider than it is tall, without a well-defined central stem, make the two species visually distinct. However this species has suffered varying fortunes at the hands of later authorities. Today many authors don't recognize and accept Opuntia cyclodes as a good species, but as part of Opuntia engelmannii, they have dismissed it as perhaps not worthy of even varietal status. In fact there is a mass of herbarium material which seems to connect this with the true Opuntia engelmannii.
Stem segments: Orbicular to obovate (rarely oblong) 15-20 cm long, bright green or yellow green, but older ones may be covered with a light pruinose surface.
Areoles: As the species, except never quite as large in maximum size as in some forms, and only 25-30 mm apart. The glochids, except on current growth, usually missing entirely. On older pads areoles show few and very short glochids, if any, but edge areoles, especially at joint's tip, produce some yellow glochids up to 12 mm long.
Spines: More slender than in typical Opuntia engelmannii. Half or almost all areoles may have spines; often there is a single stout, long spine sweeping down from the areole that may be accompanied by 1 or 2 smaller spines, but sometimes up to 6 spines. All spines are deflexed (pointing downward), relatively slender, the current year’s spines are pale yellow or straw-colored with or without red or reddish-brown bases. A typical areole's armour consists of 1 large, flattened spine 18-45 mm long, plus occasionally one or two additional shorter spines below which are only 8-10 mm long; but some specimens show up to 4 of the larger spines spreading downward and 2 of the lower, shorter ones.
Flowers: Smaller than the species, being usually only about 5 cm in diameter and length, with bright orange anthers and 6 or 7 dark green stigma lobes.
Fruits. Smaller than Opuntia engelmannii (only about 2.5 cm in diameter), globose with larger seeds, purplish when fully ripe, but not very juicy and not pleasant to the taste.
Seeds: about 4-4.5 mm in diameter, the largest found in Opuntia engelmannii, and with broader rims than is typical for the species.
Chromosome number: Opuntia engelmannii var. cyclodes is exaploid, 2n = 66.

Cultivation and Propagation: Opuntia engelmannii var. cyclodes is a low maintenance plant that tolerate considerable neglect and will naturalize, it is drought-tolerant; and suitable for xeriscaping. Easy to cultivate outdoor in dry, sandy or gravely, well-drained soils. May be grown in clay soils as long as drainage is good and soils do not remain wet, it is very adaptable both in acid, neutral and basic (alkaline) soils, but prefers a pH in the range 6 to 7.5. No serious insect or disease problems.
Watering Needs: Outdoors little or no water once established, in the green house irrigate regularly from March to october, keep fairly dry in winter, tolerate dry condition but suffer if exposed to prolonged and severe drought. A position at the base of a south-facing wall or somewhere that can be protected from winter rain is best for this plant, but is however resistant to moisture and rain.
Sun Exposure: Full sun (only), in semi shaded position wont produce many flowers.
Frost hardiness: They are reasonably cold hardy , tolerating temperatures down to -5° to -12° C (USDA: 8-10) depending on clone, they are also quite tolerant of winter wet. (In good drained soils)
Traditional uses: The fruit are edible and the tender joints can be coked as a vegetable. In medicine the plant are used to treat dyspepsia, mumps, swelling and in veterinary it is used to treat bruises. The joints are also a good food for cattle (after burning of spines)
Propagation: Propagated by cuttings of leaf pads at any time in the growing season. (Allow cut surface to callus over before planting).