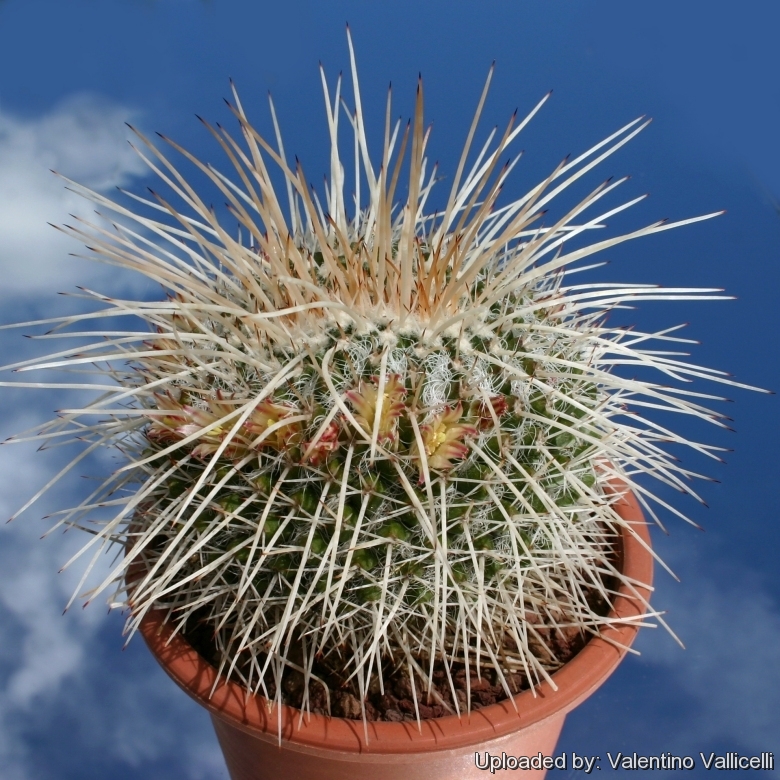 Mammillaria nejapensis (Mammillaria karwinskiana subs. nejapensis) Photo by: Valentino Vallicelli
This species forms globular stems with silvery white spines up to 5 cm in length, and dense wool and bristles at the areoles. Each single stem begins to divide dichotomously to form two stems, and will slowly form large clusters. Some consider this synonymous with Mammillaria karwinskiana.

Description: Mammillaria karwinskiana subs. nejapensis (Mammillaria nejapensis) is very variable, especially for the length of the spines, and at the beginning there were two recognized varieties: var. brevispina (short spined form) and var. longispina (long spined form), with respectively short and long spines, but they are merely local or individual variations. This species branches basally or more frequently forms large colonies by dichotomous division.
Stem: Globose to short cylindrical, somewhat wider in the upper part, blue-green to dark green, to 15 cm high and 5 - 7.5 in diameter, with latex. A cream coloured 'snowy' tomentum is present on the top of the plant.
Tubercles: Tubercles firm, pyramidal with the lacteal juice, arranged spirally with 13-21 parastichys the axil is very woolly with many tortuous bristles.
Radial spines: Only 3 - 5, awl-like, straight to slightly curved, ivory with reddish-brown tips, becoming chalky white with age, the upper shorter, 2 - 5 mm long, the lowermost the longest, to 25 or even 50 mm (or more) long.
Central spines: Absent.
Flowers: Diurnal, funnel-form, 18 mm long, 10 mm in diameter, pale cream with red-brown to scarlet midstripe on each petal. Blooms adorn the crown of the plant, usually in a ring, in the growth of the previous year.
Blooming seson: Spring to summer.
Fruits: Bright or clear red elongated and quite attractive.
Seeds: Brown.

Subspecies, varieties, forms and cultivars of plants belonging to the Mammillaria karwinskiana group 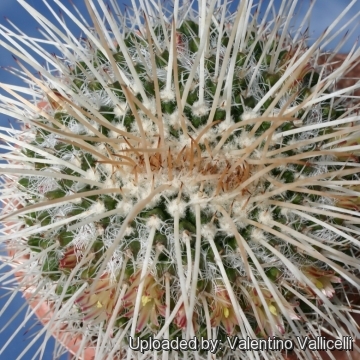 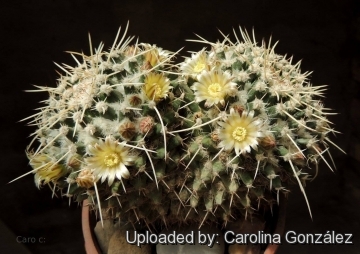 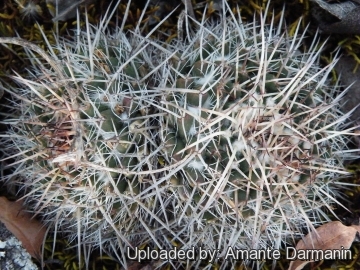 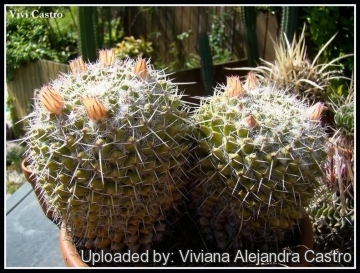 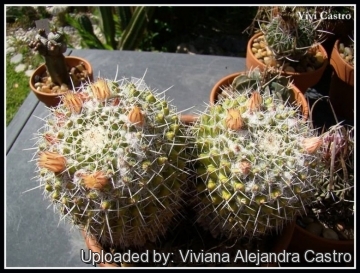 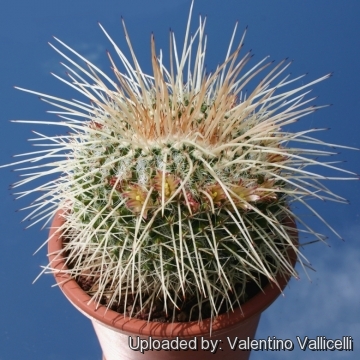 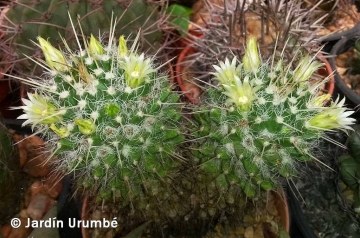 Cultivation and Propagation: It is easy to cultivate and make interesting specimens for any collection, and over time (in 12-15 years) it will form enormous colonies up to 50 cm or more in diameter! It grows by dichotomously dividing, and also by producing offsets, and doesn't require any special treatment, except for the need for frequent transplanting, in order to manage its exuberance. It needs as much light as possible without burning the plant, to keep the stems compact. Provide a well-drained soil mix. Water well and then allow to dry thoroughly before watering again during the growing season. It doesn't like much, if any, winter water, but can survive short exposures to freezing temperatures (-4° C.) if properly hardened off and kept dry.
Propagation: Mammillaria nejapensis is best propagated from seed. Seed readily germinates at 20°-22°C, or by offsets if available.