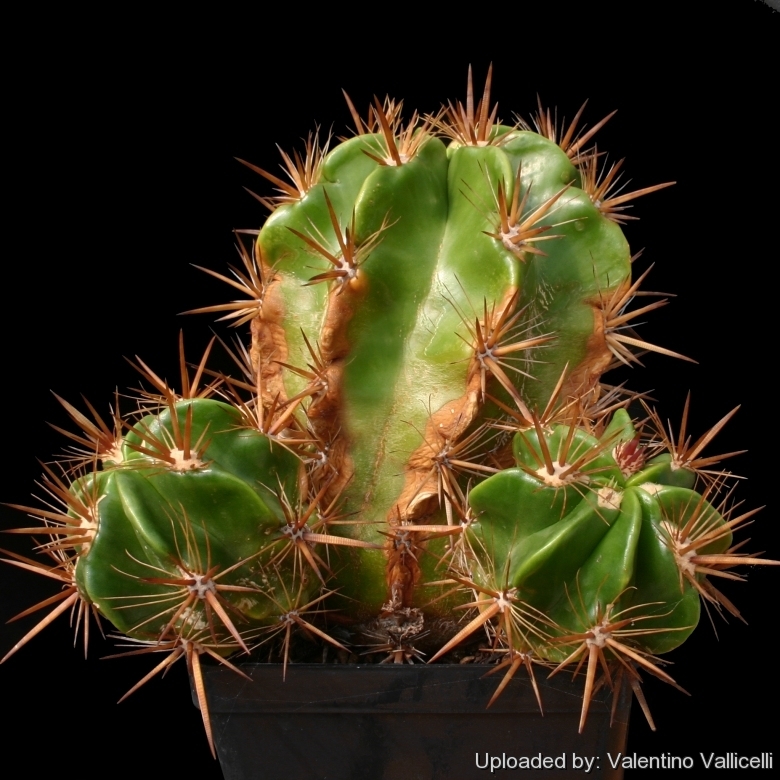 Ferocactus robustus Photo by: Valentino Vallicelli
It is an aggressive clumper that with age becomes a fabulous mound, this barrel appears very robust (as the name states)

Description: Clumping small barrel cactus, that forms powerful colonies of hundreds of branches, reaching over 90-100 cm high and 3(-5) m wide. The remarkable polycephalic habit of Ferocactus robustus is quite unlike that of any other species in the genus. These clusters are probably not from the same original root system, but are a complex which has developed from seedling plants which have grown up around the parent.
Stems: The individual stem are some of the smallest of the genus, globular to clavate, smooth, shiny dark green to red-grey, 8 to 16 cm wide (rarely exceed 20 cm of diameter).
Areoles: Few and widely separated on the ribs, approx 8 mm in diameter in diameter, with an upper flowering portion, whit short dull white felt, becoming inconspicuous in age.
Ribs: Up to 8., prominent, acute, thickened under areoles, tuberculate.
Central spines: 4-6 brown, redish or horn-coloured coloured, erect, radiating, straight, annulate, square or angled in cross section, sometimes flattened laterally, the lower one longer up to 6 cm long.
Radial spines: Needle-like, approx 10-14 , the lower ones much like the centrals and the upper ones acicular or bristle-like and lighter in colour.
Flowers: Yellow to yellow-orange, 3-4 cm in long and in diameter. Ovary covered with broad, rounded imbricated scales, these intergrading into the outer perianth segments; outer perianth segments yellow with red midstripe, mucronate; inner perianth segments yellow, oblong, acute; stigma lobes 10, red.
Blooming season: Spring and autumn .the blossoming period is long.
Fruits: 20-30 mm tall, 20 mm in diameter, yellow, with broad, widely separated, fleshy scales.
Seeds: Black 1,5 mm long and 1 mm wide, finely sculptured with polygonal ridges. 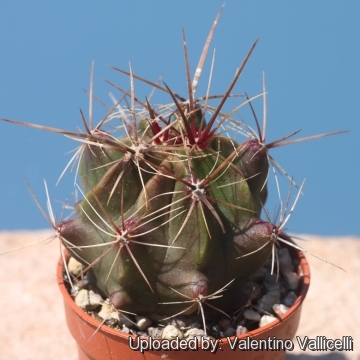 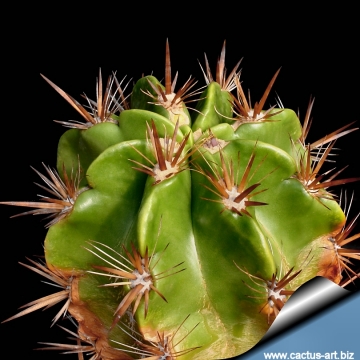 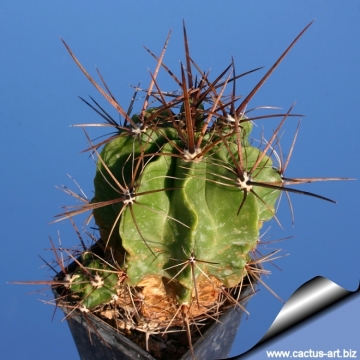 Ferocactus robustus Photo by: Cactus Art
Send a photo of this plant.

Cultivation and Propagation: Slow growing to start but does well under cultivation. Suited for any rich, well drained soil in full sun throughout the year. Water during the aestival growth cycle (this plant need plenty of water) But needs to be avoided wetting the bodies of these plants while they are in sunlight. A wet cactus in the sun light can cause sun burning which can lead to scars or even fungal infections and death. In winter keep completely dry at 10°C, but can tolerate sporadic light frost. (Hardy to -6°C)
Propagation: Seeds, offsets.