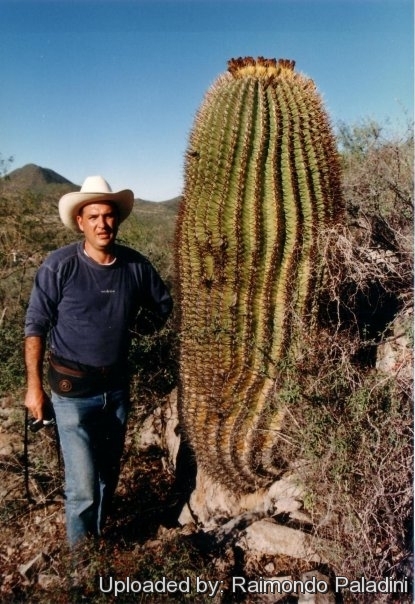 Description: F. covillei( = F. emoryi) is a solitary barrel cactus except in case of injury to the growing tip, it lacks the lower radial spines of F. wislizenii and F. acanthodes but has similar heavy, ridged, hooked central spines.
Stems: Erect, globular when young to a stout cylinder when older, 30-90(-250) tall × 30-60 (100) cm in diameter; tubercled when young later forming ribs.
Ribs: (15-)21-32, shallowly notched immediately above each areole.
Areoles: oval with brown wool, 2-2.5 cm apart.
Spines: 6-10 per areole, reddish, reddish grey, or horn colored, all robust and rigid, more than 1 mm diam.;
Central spine: 1, curved slightly to fully hooked, (hooked only on relatively young plants), heavy, roughly cross-ribbed, annulate, thick, adaxially flat, 55-95(-130) long × 2.5-4 mm. in cross section.
Radial spines: 5 to 9 similar to central, spreading, not hooked, 2.5 to 5cm long.
Flowers: Reddish outside, brilliant red inside, 6-7.5 × 5-7.5 cm; inner tepals brilliant red [or occasionally yellow]; stigma lobes brilliant red.
Fruits: Persistent, oblong, scaled, 2,5-5cm long × 25-35 mm long in diameter with the dried remains of the flower atop, ± readily dehiscent through basal pore, bright yellow, 50, leathery or fleshy, locule dry, hollow except for seeds. Often the fruit are broken into and the seed eaten by birds or rodents.
Seeds: 2 mm. in diameter, black.
Remarks: The species name F. covillei was used to indicate the plant originary found in southwestern Arizona, but they are in fact almost identical and not easily distinguishable from F. emoryi to which this plant must be rightly placed.

Notes: Ferocactus emoryi has a confused taxonomic history. The name is based on Echinocactus emoryi, which was published twice by Engelmann, each involving a different species. Engelmann’s first use of E. emoryi [in W. H. Emory] applied to a population of Ferocactus wislizeni in eastern Arizona is rejected as provisional and therefore invalid. However, Engelmann’s second use of E. emoryi was a valid publication, and it unambigously pertains to the species in southwestern Arizona that Britton and Rose unncecessarily re-named as Ferocactus covillei. 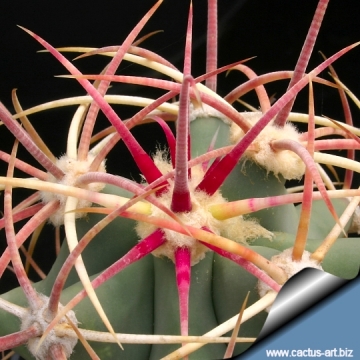 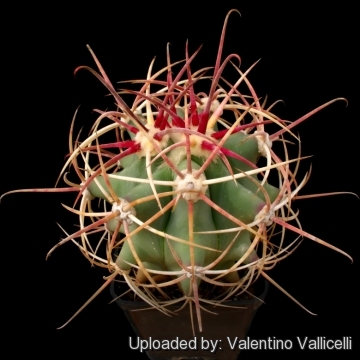 The spines sit on prominent nipples when young which will fade into the rib with age. (Ferocactus emoryi subs. covillei) Photo by: Valentino Vallicelli 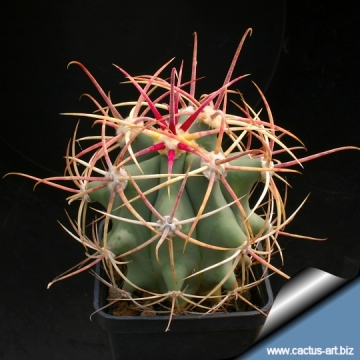 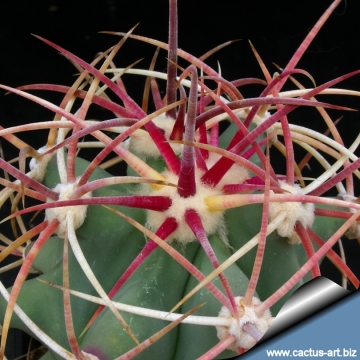 Cultivation and Propagation: Slow growing to start but does well under cultivation. Use very draining soil, water during the aestival growth cycle (this plant need plenty of water) But needs to be avoided wetting the bodies of these plants while they are in sunlight. A wet cactus in the sun light can cause sun burning which can lead to scars or even fungal infections and death.
Needs full sun. Keep dry at 10°C in winter, but can tolerate sporadic light frost.
Propagation: Seeds are the only way of reproducing.
Warning: The spines that hook around can graph you if you get too close.