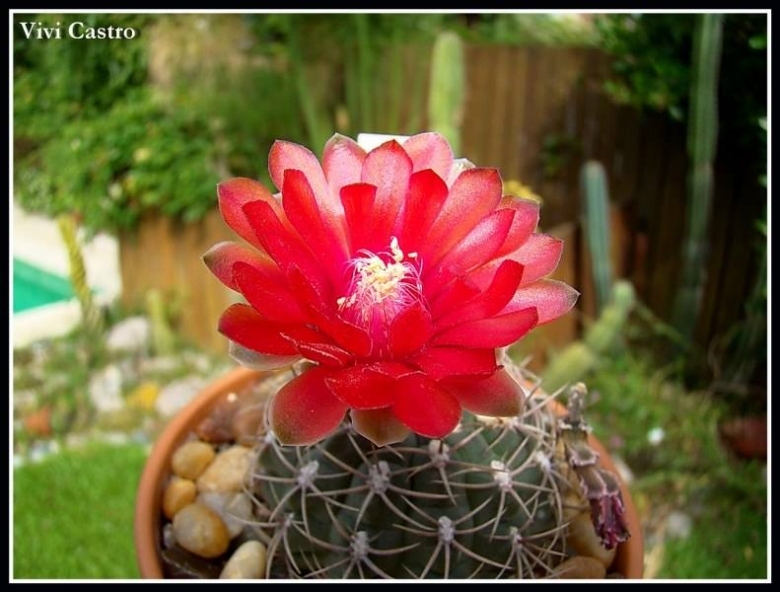 Origin and Habitat: Gymnocalycium marianae occurs in the Andalgalá Department, Catamarca province, Argentina. It is known from only a single location where it is not abundant and the estimated population size is of about 500 individuals, however there might be more subpopulations in the adjacent areas.
Altitude Range: It occurs at elevations of 1,700 - 1,800 metres above sea level.
Habitat and Ecology: The species grows in dry valley in chaco forest mostly on rocky slopes. It is very likely that the population will suffer from illegal collection in the near future for specialized collections, and the improvement of a nearby road is already planned. Hence, the species is listed as Vulnerable.

Description: Gymnocalycium marianae is a is a very peculiar species that differs from most gymnocalyciums in its flower colour, it has very showy red flowers.
Habit: It is a perennial stem succulent rising only a few centimetres above ground level.
Stem: Depressed-spherical, dark green, sometimes bronzed in full sun, up to 11 cm high and 16 cm in diameter.
Root: Turnip-like up to 3 cm long and 2 cm in diameter with numerous lateral fine fibrous roots.
Ribs: 13-16 acute, at their base 13 mm deep and 11 mm wide, with prominent chinlike protrusions under the areolae, divided by transverse furrows.
Tubecles: 5 mm high, 2,5 cm wide at the base.
Areoles: 4-6, sometimes up to 10 per ribs in mature specimens, 1-2 cm apart, circular or elliptical, 5 mm long and 3 millimeters wide, when young densely covered with white-yellow felt later becoming grey and almost bare.
Radial spines: 5-11, straight or curved, 15-20 mm long, rigid, blackish grey darker at the base, two to five of which in two rows at the side of the areola and an individual one oriented downward.
Central spines: One, sometimes missing, 20-25 mm long straight, similar in colour to the radials.
Flowers: Campanulate growing from the depression at the apex, often several at a time, within a ring, red-magenta, sometimes pink to orange with magenta throat, 35-50 mm long and 30-50 mm in diameter. Flower tube externally pale green and covered with rounded scales with a white border. The scales are about 5 mm long and become gradually longer (up to 10 mm) above. Outer perianth green with a white edge. Inner segments spatulate to somewhat pointed, 15-20 mm long, 5-7 mm wide red, magenta, pink to orange in colour. The flowering period extends over several days, thereby changing the flower colour. Stamens inwardly curved, in two concentric rows, the first spirally whorl at the top and the second with a higher number in the inner lower part of the flower tube. Filaments red, 15 mm long. Anthers yellow. Style cylindrical 15 mm long, red with 9 stigma lobes, yellow at the tip, 4 mm long.
Fruits: Spindle shaped.
Seeds: Spherically-truncated, 1,2 to 1,5 mm long and wide, black and wrinkled, with a protective coat that detaches and thus appears brownish. Hilum-micropylar region, terminal, egg-shaped and depressed. 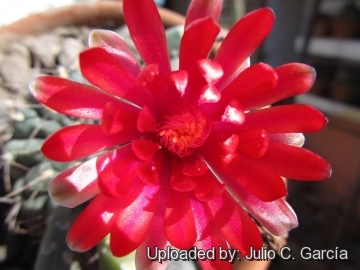 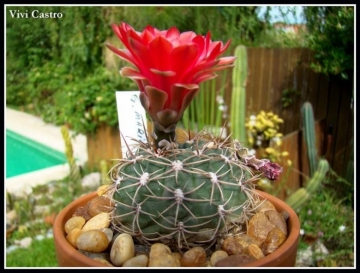 Cultivation and Propagation: Gymnocalycium marianae is an easy to grow succulent, more cold tolerant than most and less fussy regarding soil conditions.
Growth rate: It is a relatively rapidly growing and easily flowering species that will make clumps given the best conditions.
Soils: It likes very porous standard cactus mix soil.
Repotting: Use pot with good drainage.
Watering: Water regularly in summer, but do not overwater (Rot prone), keep dry in winter.
Fertilization: Feed with a high potassium fertilizer in summer.
Hardiness: Reputedly somewhat resistant to frost if kept on the dry side prior to, and during, cold weather (hardy to -12 C ° C, or less for short periods).
Exposition: Outside bright but filtered sunlight or afternoon shade, inside it needs bright light, and some direct sun. Tends to bronze in strong light, which encourages flowering and heavy spine production.
Uses: It is an excellent plant for container growing. It always looks good and stays small. It look fine in a cold greenhouse and frame or outdoor in a rockery.
Pests & diseases: It may be attractive to a variety of insects, but plants in good condition should be nearly pest-free, particularly if they are grown in a mineral potting-mix, with good exposure and ventilation. Nonetheless, there are several pests to watch for:
- Red spiders: Red spiders may be effectively rubbed up by watering the plants from above.
- Mealy bugs: Mealy bugs occasionally develop aerial into the new growth among the wool with disfiguring results, but the worst types develop underground on the roots and are invisible except by their effects.
- Sciara Flies: Sciara flies are one of the major problems for seedlings. It is a good practice to mulch your seedlings with a layer of grit, which will strongly discourage the flies.
- Scales: Scales are rarely a problem.
- Rot: Rot it is only a minor problem with cacti if the plants are watered and “aired” correctly. If they are not, fungicides won't help all that much.
Propagation: Division, direct sow after last frost. Seeds germinate in 7-14 days at 21-27° C in spring, remove gradually the glass cover as soon the plants will be well rooted (ca 1-2 weeks) and keep ventilated, no full sun for young plants! To make a cutting twist off a branch and permit it to dry out a couple of weeks, lay it on the soil and insert the stem end partially into the soil. Try to keep the cutting somewhat upright so that the roots are able to grow downward.