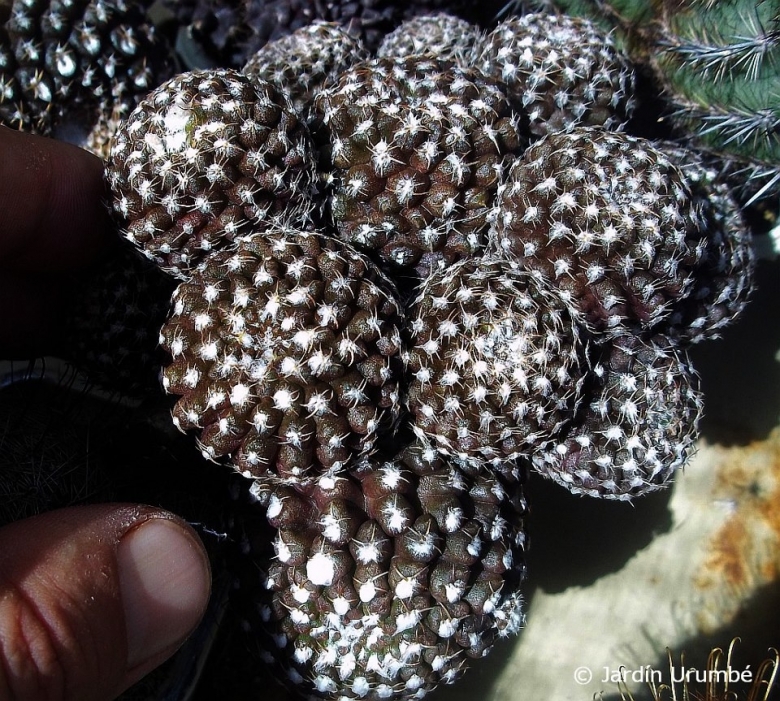 Origin and Habitat: North of Chañaral on the coast, in uninhabited area.
Habitat and ecology: The plants are closely followed by donkeys and guanacos that feed on them. In case of severe injuries the plants can die out. But if they survive and the wounds are healed, they will drive several new heads from the root.

Description: Eriosyce odieri var. malleolata is a tiny a geophytic cactus with stems rising barely above ground level (in habitat). It has a long, swollen carrot like root ending in an enlarged top-shaped plant body. The root is often much larger than the stem. It produces basal shoots that start soon to develop their own individual root becoming in time separated by the mother plant, and forms densely crowded colonies about 15 cm in diameter.
Stem: Simple or (more often) in clusters, top-shaped, dark grey-green to dark purplish-brown in the sun. In nature the stems are usually flat with the ground, with a spiny apex, in culture the apex is depresses and often partially naked. Flowering heads 2-4 cm in diameter.
Root: Strong, carrot-like 6-12 cm long not narrowed into a narrow neck.
Ribs: Up to 21, usually completely dissolved in tubercles. Tubercles' top very flat and
broad, flowering ones about 4-8 mm long, 3-6 mm wide and 3-4 mm high, not wider on the base. Each tubercles has a small chin-shaped protrusion 1.5-3 mm long just behind the areole so that the tubercles base is often shorter than the upper tubercles face (at least in habitat,while the tubercles' form in culture, especially after grafting, is usually altered). The tubercles are divided by very thin furrows and so closely set that the upper face of tubercles forms an almost continuous surface, decreasing - this way - the water loss through evaporation. This is probably an extreme adaptation to drought environments.
Areoles: Situated above in the upper face of the tubercles, 2-4 mm long, 1-2 mm wide, depressed, heavily white-tomentose, 3-5 of mm apart.
Spines: Only radial, 4-8, thin, 2-4 mm long, pointing sideward (pectinated) and curved toward the body, rough, brownish or yellowish, greying with time. On some older areoles the spines can be almost or completely missing.
Flowers: The flowers are almost identical to those of Eriosyce odieri var. solitaria. Pericarpel green to olive green, 6-10 mm long, above 4-8 mm thick, covered by 1 mm long narrow greenish scales, densely covered with a 4 mm-thick coat of white to brownish wool and abundant light yellow to yellowish-brown, half protruding, hairy bristles up to 15 mm long. Nectar-chamber shallow bowl-shaped 3-5 mm wide, and ca 1 mm deep carmine to honey closer to the tube, top half closed by the lower stamens, nectar sparse. Flower tube about 8-12 mm long, above 12-17 mm wide, lower part almost tubular, expanding and trumpet-shaped above, pale yellow to pale green, outside with large and very pointed scales. Petals 13-30 mm long, 2-6 mm wide lanceolate to almost linear. Inner perianth-segments from pale yellow to pale orange-red. Outer segments pale crimson or purple to purple-brown or slightly greenish. Stamens pale yellow, greenish yellow or pale orange, ca 8-15 mm long, anthers and pollen cream. Throat red or reddish. Style 22-30 mm long, with 8-12 pale yellow to orange stigma lobes.
Fruit: Red. The wind can transport these fruits, that can become airborne by means of the the ample cover of wool and long bristles. The fruits can literally sail across desert valleys and over mountain slopes. The seeds stick on the slow-drying inner surfaces of the fruit and are thus transported away along with the fruit.
Seeds: 1 mm long, 0.6 mm wide, 0.4 mm thick.

Subspecies, varieties, forms and cultivars of plants belonging to the Eriosyce odieri group 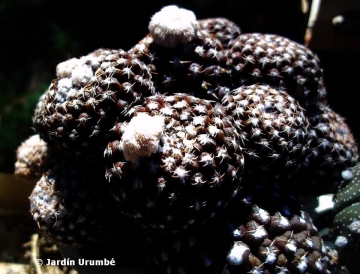 Cultivation and Propagation: Watering Needs: Its thick taproot is susceptible to over-watering. Sometimes it's grafted to avoid root rot problems.
Frost Tolerance: It likes warmth (recommended minimum winter temperature 5° C). But a plant kept perfectly dry can easily survive at winter night temperatures below 0° C.
Sun Exposure: Suited for sunny-bright exposure; but can tolerate light shade. Suited for airy exposures. It needs a deep pot and good drainage to accommodate its tap root. Keep dry in winter.
Pests & diseases: It is especially prone to rot, therefore, underpot in a smaller container filled with very porous compost.
Propagation: By seeds or graft. Seeds can be sown in the spring or summer. The seedlings should not be disturbed until they are well rooted, after which they can be planted separately in small pots.