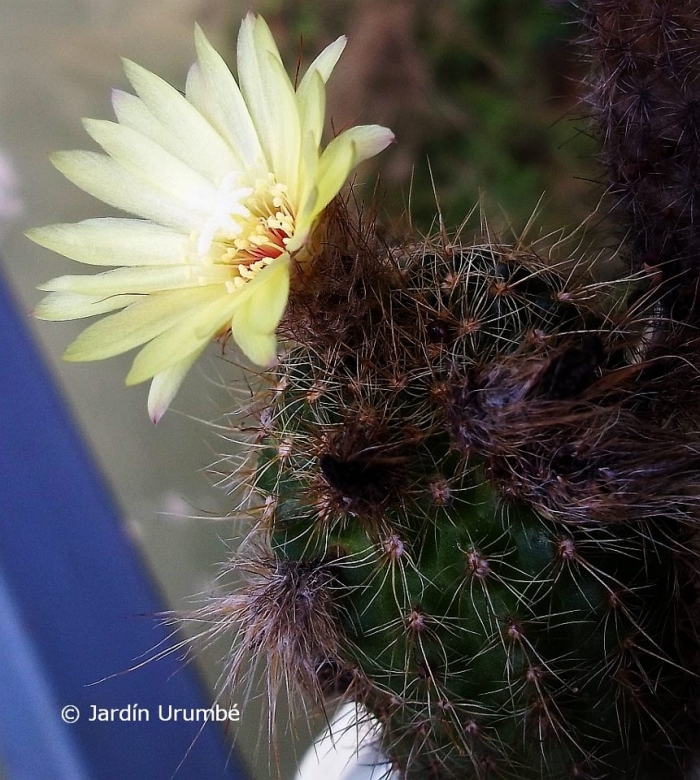 Origin and Habitat: Frailea alexandri doesn't has a large range and is found in the surroundings of Valenzuela, Paraguarí province, in Paraguay.
Habitat and ecology. This species grows in slightly acidic aluminium sandy soils.

Description: Frailea alexandri is the only Paraguayan species with shortly columnar stems. The stems are solitary, but may occasionally produce a few shoots with age. The flowers open open normally only in great heat in the hottest, brightest, afternoon sun, if at all, but even unopened flowers (cleistogamous flowers), produce fruits with viable seeds without the need for pollination, hence the buds rarely reach full bloom and remain closed.
Notes: Frailea alexandri is often included within (as a synonym of) Frailea knippeliana , but Metzing in 2006 suggested that the description of F. knippeliana should be regarded as a duplicate description of Frailea pumila, and renamed the columnar plant as Frailea alexandri. However there remains a considerable confusion surrounding the true identity of this this plant.
Derivation of specific name: This member of the Cactaceae family was given this name by Alexander Arzberger. Alexander's frailea.
Stem: Globular to shortly cylindrical 15- 30 mm in diameter and up to 7 cm tall, epidermis dark green that takes a red tinge when exposed to direct sunlight.
Ribs: About 15, broken down into small tubercles.
Areoles: Filled with whitish felt.
Radial spines: 13 to 15 straight, spreading, yellowish, later darker, 2-4 mm long.
Central spines: 2-4 to 6 mm long.
Flower: Funnel shaped 20-30 mm long and wide, yellow, some petals are flushed red. 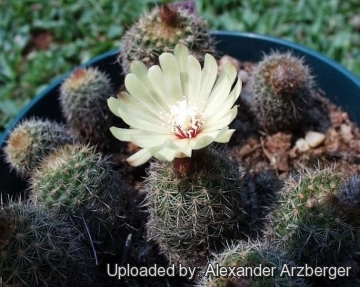 Cultivation and Propagation: This is a is a summer grower species relatively easy to grow. It is sometime seen as a grafted plant but grows very well on its own roots too.
Growth rate: Fraileas are relatively short-lived plants, only lasting few years (rarely more than 10-15 years in cultivation) and, possible annuals in habitat! In fact they reseed readily around the base of the mother plant from self-set seed if kept reasonably moist during warm weather. It is a
good idea to keep restarting them from seed; what looks like a healthy big plant may suddenly die of old age without warning.
Soil: Use mineral, slightly acidic, well permeable substratum with little organic matter (peat, humus), plants may become too elongated if compost is too rich.
Repotting: Re-pot every 2 years. Use pot with good drainage.
Fertilization: It grows much faster with a low nitrogen content fertilizer in spring and summer. Potassium helps maintaining the plants compact and healthy.
Watering: Requires careful watering to keep plant compact. Water sparingly from March till October, the thin, fibrous roots suffer if there is humidity, therefore the plant should be watered only when the surrounding terrain is dry. Keep dry as soon as the temperature starts dropping in October and keep it perfectly dry in winter at temperatures from 5 to 15 degrees centigrade.
Hardiness: They need a minimum temperature of 5-10° C (but occasionally temperatures of a few degrees below 0° are not dangerous if kept on the dry side prior to, and during, cold weather). It tends to rot in winter during the resting phase, if kept wet. In the rest period no high atmospheric humidity!!
Sun Exposure: Light shade to full sun, its colour tends to richer and darker when grown in light shade. In a shaded position the plants grow faster.
Propagation: With fresh harvested seeds. Fraileas set seed (when well grown) and grow easily from seed. In fact, they are reported to set seed even if the flower doesn’t open. This self-fertilization is called cleistogamy. Seedlings dislike strong light and dry conditions and need to be repotted frequently during the first few years. However, old plants become senile and have a tendency to succumb to disease and a weak root system. At this stage, as is well known, they die suddenly. So, after they reach about 4-5 cm in diameter grow them slowly, and adopt a new repotting period, using intervals of every 3-4 years. Additionally grow them under drier conditions or with stronger sunlight. But plants are sometine grafted to accelerate growth, but the grafted plants are typical rather tall growing, compared with plants on their own roots that are usually more flat to the ground.