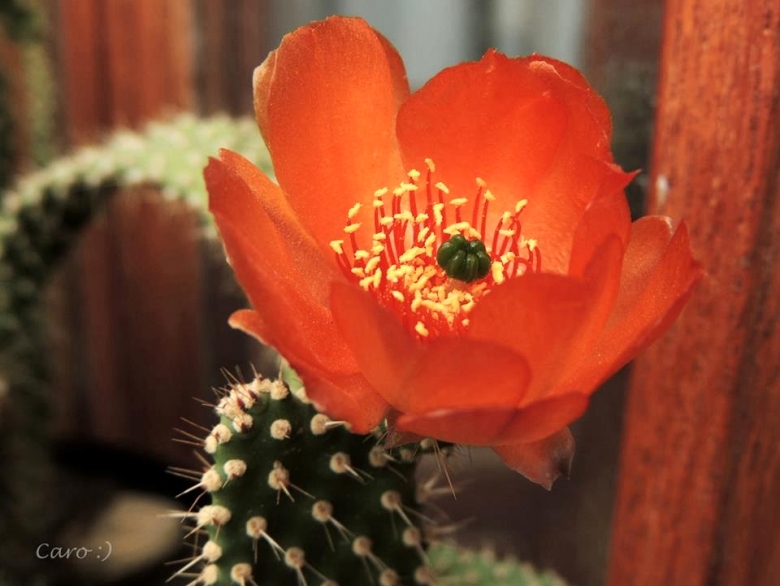 Origin and Habitat: The origin of Tunilla erectoclada is unknown, it is not possible to establish the range of the species. Supposedly, this species is found in Salta, Argentina where it grows in rocky slopes interspersed with grass.
Altitutde: Around 2300-2700 metres over sea level.

Description: Tunilla erectoclada is a low-growing ground covers miniature prickly pear. It is densely branched, prostrate and forms large clumps or mats. It only grows about 2 pads high (less than 10 cm tall), growth is mostly sideways.
Taxonomical notes: The species is recognized as a provisional taxon by Hunt et al. (2006). Expert R. Kiesling does not recognize it as a good species but as part of Tunilla corrugata and argues that T. erectoclada was described from cultivated plants and its origin is unknown and it holds the characters of T. corrugata.
Stem segments: about 6 cm long, flattened, narrow, triangular to tongue shaped, light green or blue-green, somewhat tuberculate erect in young growth then creeping.
Areoles: Numerous, very closely set (up to 140 per segment) dull creamy white to brown.
Spines: 4-7 white needle-like, frail, 4-10 mm long, bent backward and lying next to the surface or spreading
Flowers: Extremely vivid orange to carmine red. Pericarpels elongate, tuberculate, bristly.
Fruit: Fleshy but thin walled splitting open laterally at maturity.

Subspecies, varieties, forms and cultivars of plants belonging to the Tunilla erectoclada group 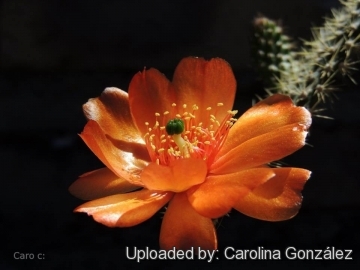 Cultivation and Propagation: Tunilla erectoclada is a low maintenance groundcover plant that tolerate considerable neglect and will naturalize, it is drought-tolerant; and suitable for xeriscaping.
Growing rate: It is relatively fast-growing species; in cultivation with generous irrigation it sprawls to form large low mounds in only a few years. It is suitable for hanging baskets too.
Soils: Easy to cultivate outdoor in dry, sandy or gravely, well-drained soils. May be grown in clay soils as long as drainage is good and soils do not remain wet, it is very adaptable both in acid, neutral and basic (alkaline) soils, but prefers a pH in the range 6 to 7.5.
Repotting: Use pot with good drainage.
Feeding: During the beautiful season it’s good to enrich the soil using a fertilizer rich in potassium and phosphorous, but poor in nitrogen, because this chemical element doesn’t help the development of succulent plants, making them too soft and full of water.
Watering Needs: Outdoors little or no water once established, in the green house irrigate regularly from March to october, keep fairly dry in winter, tolerate dry condition but suffer if exposed to prolonged and severe drought. A position at the base of a south-facing wall or somewhere that can be protected from winter rain is best for this plant, but is however resistant to moisture and rain.
Sun Exposure: Full sun, in semi shaded position wont produce many flowers.
Frost hardiness: They are reasonably cold hardy , tolerating temperatures down to -5° to -15° C (or even less) depending on clone, they are also quite tolerant of winter wet. (In good drained soils)
Heat Tolerance: Excellent.
Pest & diseases: No serious insect or disease problems. Watch for mealy-bugs.
Propagation: Propagated by cuttings of leaf pads at any time in the growing season. (Allow cut surface to callus over before planting).