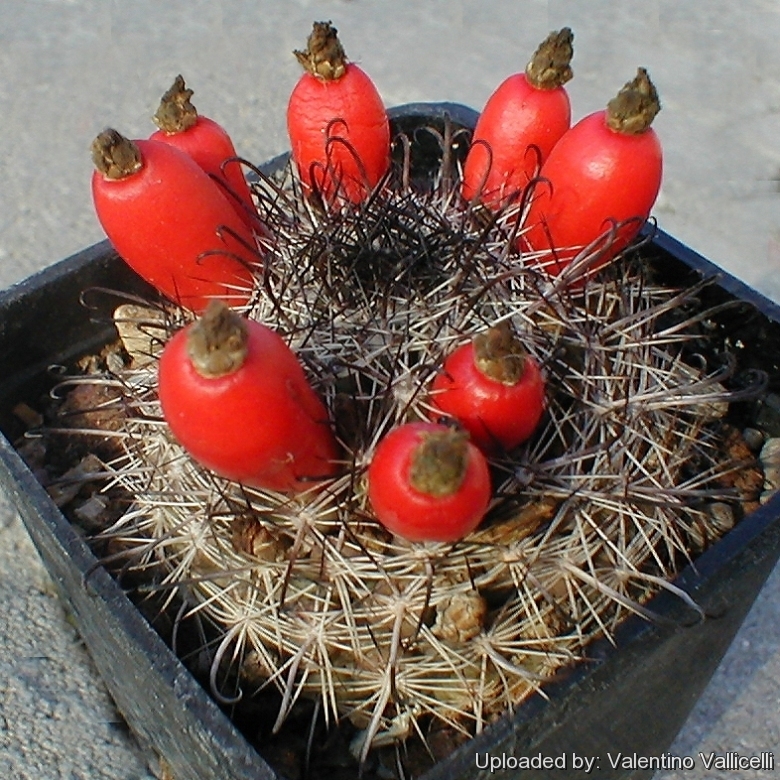 Origin and Habitat: Mammillaria louisae is endemic to north-west Baja California from Punta Baja near el Rosario to Arroyo San Telmo (Type locality: 1.6 km away from S. Socorro), Mexico.
Altitude range: 0-300 metres above sea level.
Habitat and ecology: This species grows in coastal region near Socorro in hot, gravelly soil, often scarcely showing above the surface. It grows together with many other cactus species many of which are locally endemic (e.g., Ferocactus fordii, Ferocactus peninsulae var. santa-maria Echinocereus maritimus, Echinocereus brandegeei, Machaerocereus gummosusand Machaerocereus eruca). Mammillaria louisae, previously common over its range, has become quite rare in recent years. The introduction of the ostrich from South Africa and the diffusion goat to almost anywhere has had a profound effect on natural vegetation, and many native species have been heavily grazed. Moreover this species grows in coastal areas where human impacts tend to be severe and can affect the subpopulations rapidly in the near future. The species is used as an ornamental, for which it is illegally collected from the wild.

Description: Mammillaria louisae is a most alluring miniature species distinguished by its extremely large flowers that may exceed the size of its small vegetative body. The flower is white or light pink with a darker stripe down the center. The dwarf globular body is usually solitary and is covered with light brown radial spines and 4 dark brown centrals of which one is hooked. Sometimes we find the spelling "louisiae".
Derivation of specific name: George Edmond Lindsay named the plant Mammillaria louisae in December 1960 in honour of Louisa Hutchison (fl. 1934), mother of the US-American cactus collector Ted Hutchison.
Roots: Fibrous, with no distinctly enlarged tap root.
Stem: Usually solitary or occasionally branched, dwarf globular, 1 to 3.5 cm. tall and 1.5 to 3 cm. wide occasionally reaching a maximum of 6 cm in height for 4 cm in diameter. Greyish green almost completely hidden by the spines.
Tubercles: 5-6 mm long, 4 mm broad at the base, the axils bearing white felt when young but no bristles or spines.
Areoles: Round, about 1.5 mm in diameter, bearing white felt.
Radial spines: Between 10 and 20, acicular, 5-7 mm. long, white or light brown with dark tip.
Central speines: 4, cruciform, brown with a dark point, 8-10 mm long, the lower being the longest, hooked, the upper three straight.
Flowers: Flowers in a ring about the crown, arising from the axils of the tubercles, fairly large compared to the size of the plant (up to to 3.5 cm long and 4 cm across). Pericarpel scaleless. Perianth segments grading from small scales near the base of the tube to the inner perianth segments; outer segments olive to brownish green with light pink margins; inner segments whitish or pinkish, with lavender-pink, or brownish-pinkish median streak to 25 mm long and 6 mm. wide. The protruding stigma has 6-8, lobes 7-11 mm long, olive-green or reddish brown. M. louisae is interesting in that the stigma lobes are quite hairy when inspected under a hand lens. Mammillaria louisae flowers in the hottest months. The flowers close at night but reopen a second day.
Fruits: Large, round to clavate, to 20 long, and 4 (or more) mm wide, brick red. M. louisae both in habitat and in cultivation flowers and fruits freely.
Seeds: 1.1 mm black.
Taxonomy notes: M. louisae has historically been confused confused with other Mammillaria taxa especially with Mammillaria hutchinsoniana, which is a larger plant that occurs farther south and inland. The Mammillaria species of Baja California are understudied and there is no single key to all taxa. Identification difficulties obscure our understanding of the range and rarity of taxa such as M. louisae. Several individuals appear to be morphologically intermediate or do not fit cleanly within existing species descriptions [6].

Subspecies, varieties, forms and cultivars of plants belonging to the Mammillaria hutchisoniana group 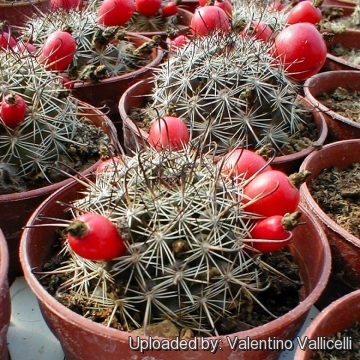 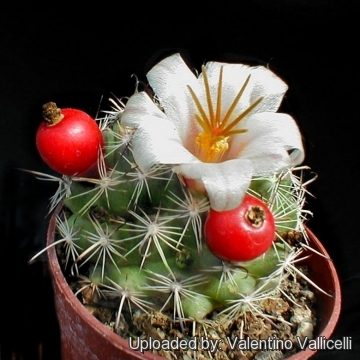 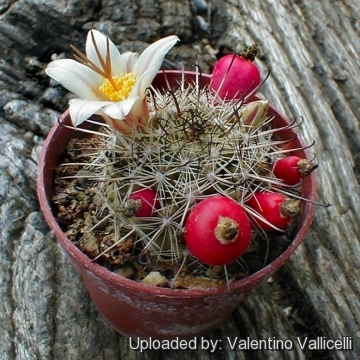 Cultivation and Propagation: Mammillaria louisae is one of the easiest cacti to raise from seed, and two- year-old plants flower and set seed readily. Grow it in the sun, in a very well drained standard compost. Water moderately only on in the growing season. This species is very sensitive to any excess of moisture.
In winter keep dry to a minimum of + 5