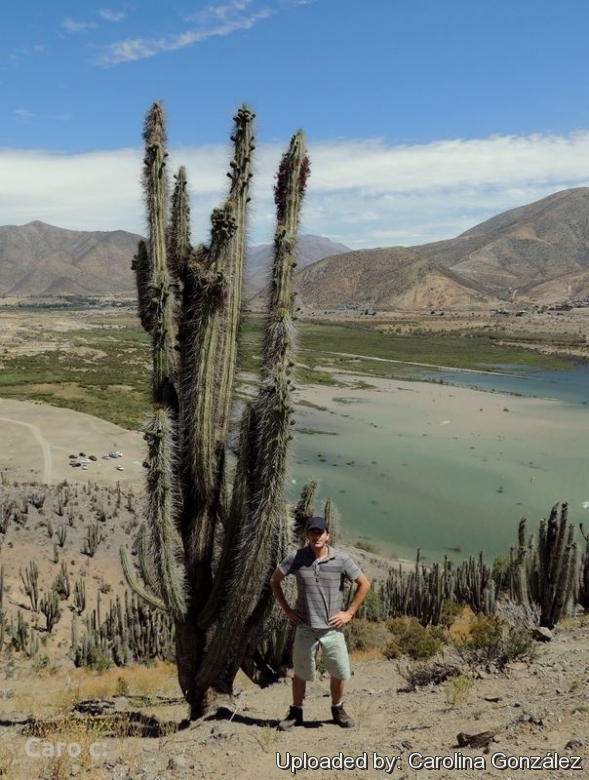 Origin and Habitat: Eulychnia acida is endemic to western Chile, where it can be found in Coquimbo and halfway in Atacama region.
Altitude range: 0 to 1,300 metres above sea level.
Type locality: Near Illapel and Choapa, Chile.
Habitat and Ecology: The species occurs in desert scrub and sclerophyllous forest from sea level into the coastal valleys and mountain slopes, usually together with Echinopsis chiloensis. They generally prefer rocky slopes where fog and mist condense on the plant branches and nearby rock and trickle down to the roots, but also on gentler slopes and even flats, only where there in some rainfall. Even in these location rarely the plants receives more than roughly 50 mm of rainfall per year. Eulychnia acida is one of the most characteristic element of the bush in its range, and cab take on different appearances in different areas because of intraspecific variation and environmental factors. The plants can be hundreds of years old and their contribution to the ecosystem is very important in the middle northern Chile, between Huasco and Aconcagua. Tristerix aphyllus, a parasitic member of the family Loranthaceae, exclusively parasitizes Eulychnia acida and Echinopsis chiloensis, and its seeds are dispersed by the Chilean mockingbird, Mimus thenca. The seeds are typically deposited by the birds onto the spines of the cactus, where they adhere and then the newly germinated seedling grows up to 10 cm to bring the tip of the radicle into contact with the body wall of the cactus. After establishing itself on the host, T. aphyllus is entirely endophytic, with only its bright red inflorescences appearing on the exterior of the host, where they are pollinated by hummingbirds. Eulychnia acida has a wide range, it is abundant, the threats are localized, and its population is overall stable. The major threats are agriculture of fruit trees and goat grazing.

Description: Eulychnia acida, locally known as 'copao', is columnar cactus that varies in habit, usually treelike 1.5-4(-7) meters high, with a definite trunk 1 meter long and then more or less branching, forming a more or less rounded top, but sometimes shrubby, much branched, without trunk, forming a low mass 1 meter high or less, with branches often procumbent or ascending. Often plants have not any symmetrical or regular development, so many of them are raggedy and sometimes downright ugly for their constant struggle for moisture. Eulychnia acida are fiercely spiny even as seedlings. The fruit is edible, almost naked without wool and or porrect spines.
Derivation of specific name: The specific epithet 'acida' comes from the Latin, meaning 'sour' and refers to the flavour of the fruit.
Stems: Usually erect but sometimes nearly prostrate, 6-12 cm in diameter . The lack of rainfall results in a pallid grey-green colour, sometimes quite ugly. Most of the plants become covered with dirt and dust that is never removed by cleansing rain. Parts of the plants are usually dead or dying, and the living parts may be dormant, so that it is difficult to ascertain which is which.
Ribs: 10-16, broad and low.
Areoles: 7-15 mm apart.
Spines: Variable, nearly porrect, needle-like, greyish in age but brownish when young. Central spines 1-2, erect, sometimes 20 cm long. Radial spines about 12, more or less directed outward 1 cm or more long.
Flowers: Borne near the stem tips, broadly bell-shaped, white with reddish midveins, 5-7 cm long, turbinate, up to 4-6 cm in circumference at top. Ovary and tube covered with numerous small, ovate, imbricating scales, fleshy at base but with acute, callous, black tips and very short sparse brown to grey-black hairs. Limb somewhat oblique. Inner perianth-segments at first pale rose-colored, then white with pink midstripe, 20 to 22 mm long. Throat very short, covered with stamens. Stamens borne in the broad throat white, 1 to 1.5 cm. long, included. Style short and thick, 2 cm long, stiff, white, with 12 to 15 stigma-lobes.
Fruit: Globose, 5-6 cm long, and 5 cm in diameter, scaly, hairy, devoid of spines, fleshy, somewhat acid, grey-green becoming brownish yellowish green and crowned by the persistent perianth remnants.
Seeds: 1.5 mm. dull black.
Similar species. E. acida differs from Eulychnia ritteri in the, woolly hairs in the axils of the bracts of its flowers and in the fruits being very short instead of long. 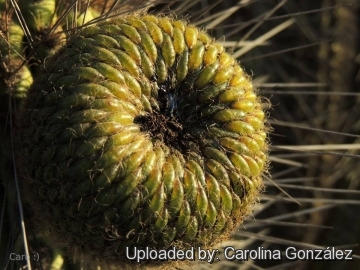 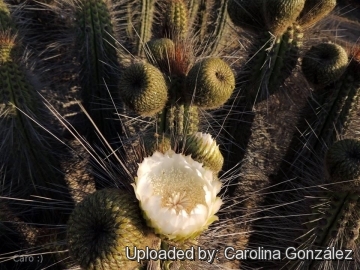 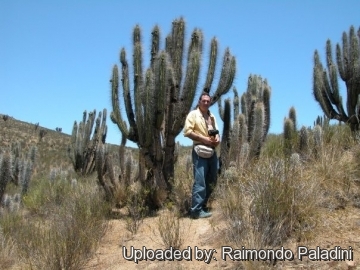 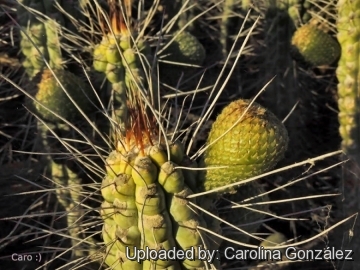 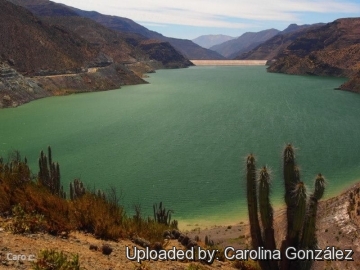 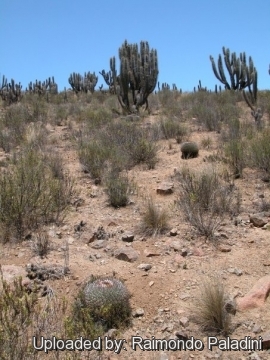 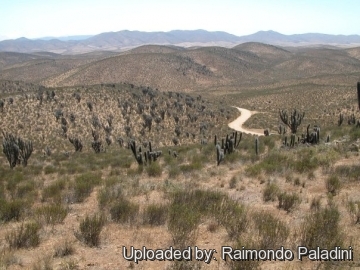 Cultivation and Propagation: Considering that the copao, Eulychnia acida, comes from a habitat with an extremely arid climate, they are remarkably tolerant of pot culture. These plants are susceptible to overwatering. They requires also an appropriate air circulation. Eulychnia are summer grower species easy to cultivate. Eulychnia acida and Trichocereus chilensis are used as fences in central Chile.
Growth rate: This is a moderately slow growing cactus kept for the beauty of its form that will make clumps given the best conditions.
Soils: It likes very coarse mineral cactus mix soil, but can become too elongated if compost is too rich.
Repotting: Use pot with good drainage.
Watering: It requires light but regular waterings in summer, but let the soil mix dry between waterings, but do not overwater (Rot prone), it must be strictly kept dry throughout the winter quiescent period since it is very sensitive to any moisture excesses keep dry in winter.
Fertilization: Feed with a high potassium fertilizer in summer.
Hardiness: Not highly tolerant of a great deal of frost. They need to be kept in a cool place during winter rest and are resistant to light frost if kept on the dry side prior to, and during, cold weather ( they are hardy to -2 C ° C short periods). However some warmth throughout the year will increase the grower's success (minimum 5° to 10°C during rest season).
Exposition: Requires full sun or light shade and careful watering to keep plant compact with strong coloured spines. Tends to bronze in strong light, which encourages flowering and heavy spine production. Light shadow my be useful in the hottest summer days.
Uses: It is an excellent plant for container growing. It look fine in a cold greenhouse and frame or outdoor in a rockery.
Pests & diseases: It may be attractive to a variety of insects, but plants in good condition should be nearly pest-free, particularly if they are grown in a mineral potting-mix, with good exposure and ventilation. Nonetheless, there are several pests to watch for:
- Red spiders: Red spiders may be effectively rubbed up by watering the infested plants from above.
- Mealy bugs: Mealy bugs occasionally develop aerial into the new growth among the wool with disfiguring results, but the worst types develop underground on the roots and are invisible except by their effects.
- Scales: Scales are rarely a problem. It is wise to treat your whole collection with a systemic insecticide twice a year in spring and autumn.
Rot: Rot is only a minor problem with cacti if the plants are watered and “aired” correctly. If they are not, fungicides won't help all that much. To prevent rottenness it is also advisable to surround its root neck by very rough sand or grit, this help a fast water drainage.
Traditional uses: A popular item sold in many regions of the world is the rain stick of Chile, made from the dried skeleton of the stem of Echinopsis chiloensis or Eulychnia acida. The dry stems are harvested in the field, cleaned, and prepared by pushing stout spines through the areolar gaps in the wood. The cylinders of the wood are sealed and filled with various materials, such as volcanic sand or pebbles, that run up and down when the stick is tilted. These are then sold locally and overseas. The trade in rainsticks made from cacti has increased in recent years, giving rise to concern over the impact on the wild populations. Rain sticks are also made from the wood of the cardon, Echinopsis atacamensis subsp. pasacana, in northwestern Argentina. The species is also used for a variety of purposes including as an ornamental, to manufacture art crafts, as a living fence, as fire wood, and the fruits are eaten. From 2010 some farmers have started planting orchards of copao fruit, with chosen clones or cultivars selected for fruit size, colour, intense flavors and aroma.
Propagation: Seeds or offsets. Seeds germinate in 7-14 days at 21-27° C in spring, remove gradually the glass cover as soon the plants will be well rooted (ca 1-2 weeks) and keep ventilated, no full sun for young plants!