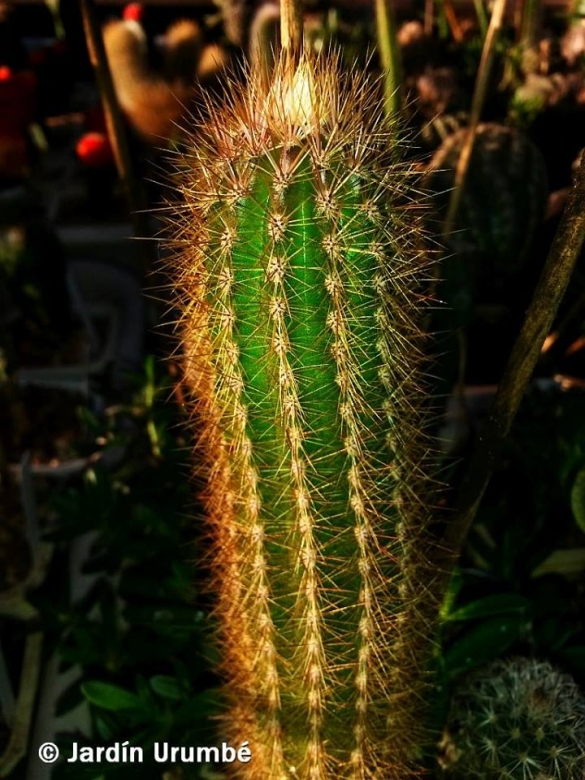 Origin and Habitat: x Pachgerocereus orcuttii is very rare in the wild, and is endemic to Baja California, Mexico, occurring in a single area southeast of El Rosario. There is one species only, Pachgerocereus orcuttii, known from only a half dozen plants or less.
Altitude: Around 20 metres above sea level.
Habitat and ecology: It grows on mostly sandy soils of the coastal chaparral and hillsides a few miles from the sea, together with Idria columnaris and Echinocereus engelmannii.

Description: x Pacherocactus orcuttii (x Pachgerocereus orcuttii) is a naturally occurring intergeneric hybrid between the massive tree-like Pachycereus pringlei and the shrubby Bergerocactus emoryi. These "parent" species are very different, the former being huge and robust, the latter typically less than 1,2 m in height and 5 cm in diameter. These species grow in close proximity to each other in Baja California south of the town of El Rosario. It is a shrubby columnar cactus, forming clumps to 2-3,5 m high and 4 m wide with as many as 30 branches and short trunks. It tends to clump from the base and has long golden-spines straight out and some facing down. The flowers are typically yellow and are 6-7 cm wide. However, one report tells of greenish-brown flowers. The flowers can produce viable seed in heavily spined fruit that result in offspring very similar in appearance to the mother plant.
Derivation of specific: The species, named for Charles Russell Orcutt, an early 20th century American plant collector in western deserts.
Stems: Yellowish green, (5-)7-10(-12) cm in diameter, constricted at the end of each year's growth.
Ribs: 14-18, obtusely toothed.
Areoles: Usually distinct, 2-9 mm apart.
Spines: Not clearly differentiated as centrals and radials, light yellow, becoming darker with age.
Central spines: 5-10 with 1-2 much longer than the others, 1.5-7 cm long.
Radial spines: As many as 20 or more, 0.5-1.5 cm long.
Flowers: Funnelform, light yellow, 6-7 cm long, 6 cm in diameter; pericarpels and floral tubes covered with scales and numerous areoles bearing white wool and bristly spines.
Blooming season: The plants flower during the day in spring. (in habitat from April to June)
Fruits: Globose, 5 cm in diameter, dehiscing irregularly, with dense wool and spines.
Seeds: Shiny black, slightly pitted.
Chromosome number: 2n = 44, Mexico.
History: Cereus orcuttii Brand, was named in 1900 on a single plant collected by Orcutt in 1886 and grown in his garden. For many years no one knew the actual locality of this distinctive cactus, but in 1950 it was rediscovered by Charles Harbison. Considerable searching, however, yielded only three individuals. Its origin remained a mystery until Moran pursued the idea of hybridity. Subsequent studies have shown that Orcutt's cactus is, in fact, a naturally occurring hybrid between Pachycereus pringlei and Bergerocactus emoryi. Reid Moran described the hybrid genus X Pachgerocereus, combining the names of the parental genera. Nomenclatural technicalities invalidate that name, however, and a new name, x Pacherocactus, was coined by Gordon Rowley in 1982 in order to make the nothogeneric name comply to the letter with Art.H.6.2 of the current I.C.B.N. (1988). It later became evident that both parental species are tetraploids, which could explain the fertility of the hybrid.