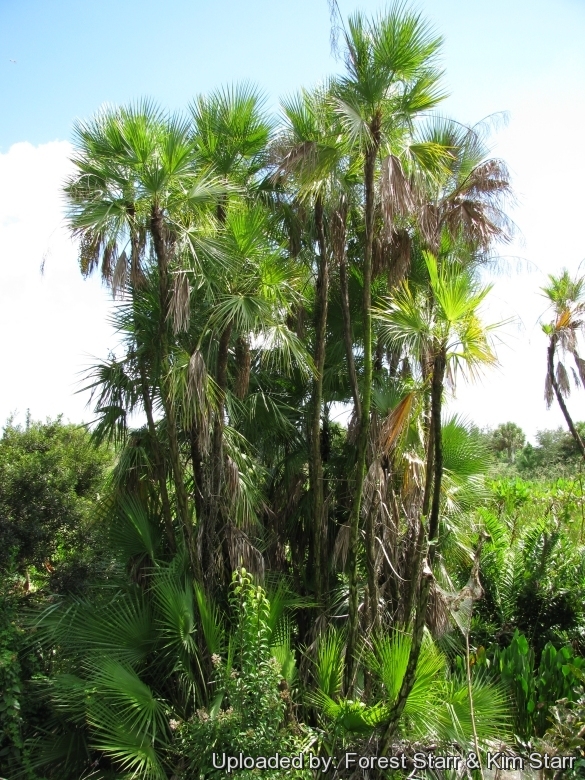 Origin and Habitat: Central America, south-eastern Mexico, the Caribbean, the Bahamas, and extreme southern Florida.
Habitat: It grows in low-elevation in swamps and periodically flooded forests in great mounds that erupt from the edges of small islands that dot this "river of grass".

Description: Acoelorrhaphe wrightii is a small to moderately tall palm that grows in clusters to 5–7 metres, rarely 9 m tall with a variable spread. The trunks lean with multiple suckers clustered at the base away from one another creating attractive informal clusters as it matures.
Trunks: Slender less than 15 centimetres diameter covered with old leaf bases and loose brown fibrous matting for most of its extents that gradually fall with age. This ensures that there are trunks of different heights on the palm at all times if suckers are not pruned off.
Crown shafts: 3-4 m wide with 20-25 fronds atop thin stems.
Leaves: Palmate (fan-shaped), with segments deeply divided, joined to each other for about half of their length, and are 60-90 cm wide, light-green above, and silver underneath. The leaf petiole is 1-1,2 m long, and has orange, curved, sharp teeth along the edges averaging 2-5 mm long and inspire another of the plant's common names, the silver saw palm.
Inflorescence: 1-1.2 m long branched to four orders extending past the leaves.
Flowers:Minute, inconspicuous, whitish to greenish and bisexual, with 6 stamens.
Blooming period: Late spring.
Fruits: Pea-sized, starting orange and turning to black at maturity quite showy in the autumn. 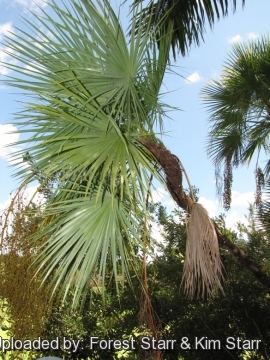 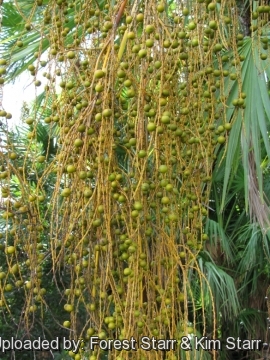 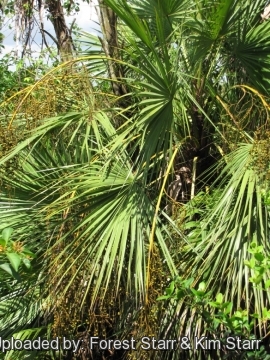 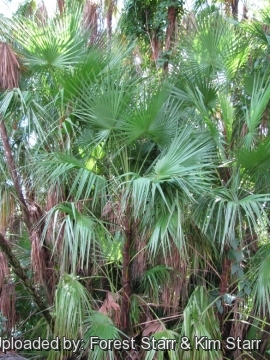 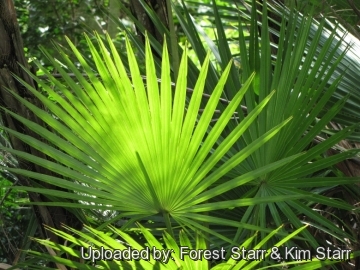 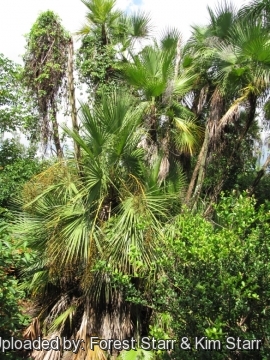 Cultivation and Propagation: It is easy to grow, tough and durable and very adaptable to soil type, but clay soil is much better than sand, or silt, because clay holds water, this palm is a fast grower if the water is kept up to it. Acoelorrhaphe wrightii is a great palm in a boggy spot where the land has been raped, and drainage is not so good.
Fertilization: Need a perfect fertilizer diet including all micro nutrients and trace elements or slow release fertilizer. May suffer "frizzletop", a manganese deficiency. If it doesn't get enough magnesium, the leaves take on a rather unhealthy yellow colour.
Light: Prefers full sun but will tolerate low light.
Hardiness: Some cold tolerance. This palm has tolerated temperatures down to –6ºC and even a little snow. However it can be difficult to get it to look its best without a great amount of heat and sun and so it is only really suited to the tropics (USDA Zones 9-12)
Drought tolerance: This palms like to be waterlogged, since their habitat is along riverbeds and in cultivation they appreciates very abundant waterings and is tolerant of standing water too. During the summer or warmer months, water frequently (even every 2 days) to keep the soil from drying out. However this palm a will tolerate occasional dryness if not very prolonged and can even thrives in poor, dry soils, but do better when grown in nutrient-rich soils with regular watering.
Remarks: Few people are aware of just how large this palm can get, and one often sees it planted in places where its going to cause real problems later on.
Aerosol salt tolerance: It is salt tolerant.
Maintenance: Prune diseased, damaged or drying fronds, but do not prune if the frond still has some green colour. Palms recycle nutrients from dead or dying fronds and use them for healthier fronds. Palms only have a set number of new leaves that can sprout and grow per year and removing fronds will not increase that number. If you cut off more than what will grow annually, you could be left with a pretty bare and bald Palm. This palm will eventually form a large clump. Use a lawnmower to eliminate suckers while they are small.
Usage: Its very informal appearance make it perfect near highways, buffer strips around parking lots and used to accent in an expanse of lawn. It is fond of water so plant it at lakeside and ponds. It can also be used to create screens or even impenetrable barriers as the clumps mature and merge together. This palm is exceptionally attractive with night-time lighting from below. A shade screen patio will provide an excellent environment for young specimens cultivated in containers which can eventually be planted in a sunny location.
Propagation: By seeds that germinate well and are readily available. Also by divisions of clumps.