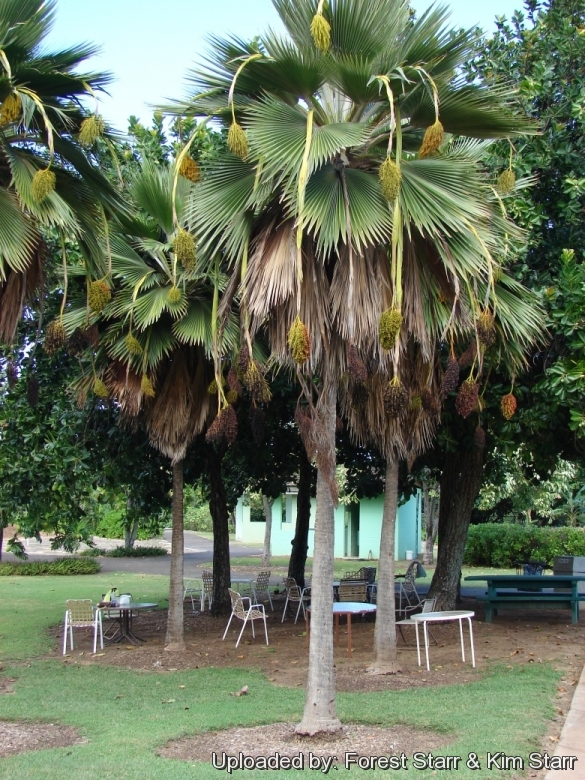 Origin and Habitat: It is endemic to Fiji, in particular the Lau Islands, introduced on other pacific islands.
Habitat: It grows coralline limestone sands in coastal environments subjected both to wind and salt sprays.

Description: Pritchardia thurstonii is a medium sized palm similar to Pritchardia pacifica but smaller. It is very decorative and used frequently as avenue plant in Hawaii and in other tropical counties.
Stem: Solitary, upright ,4-5(-8) m tall, with a trunk up to 15(-20) cm in diameter often spreading slightly at the base, brown or dark gray in color, with vertical fissures and narrow rings of leaf scars.
Leaves: Costapalmate, induplicate, large, flat, 1,5-1,8(-3) m long and almost as wide, forming a semi-circle, the leaf blade is finely plicate (folded like a fan from the base to the tips of the leaf) with up to 70 folds across the leaf surface, divided into stiff, single-fold segments usually no more than one-half the length of the leaf blade, with erect, bifid leaf segment tips. The leaf colour is bright green with a waxy glaucous coating on both upper and lower surfaces, with small elliptical scales in parallel lines underneath. Petiole and the underside midribs are covered with grey or whitish woolly tomentum. The leaf sheath breaks down into a mass of tawny fibres. A layer of wax covers the leaf surface, which may help prevent water loss during exposure to the high winds, and salt in the coastal environment in which it is found.
Inflorescences: Spadices are longer than the crown and arch out and down to 2 m long with single panicles of yellow flowers, branched to two or three orders.
Fruits: Spherical, 5-7 mm in diameter, turning red then black at maturity in a heavy head sized clump at the end of a 100-180 cm arching cord.
Seed: 4 mm in diameter.

Notes: Pritchardia thurstonii is one of the few Pritchardias with inflorescences which extend beyond the crown and hang down giving an elegant appearance. The others are: Pritchardia hardyi and Pritchardia kaalae. 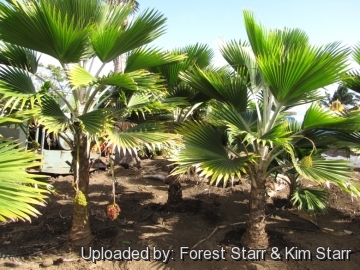 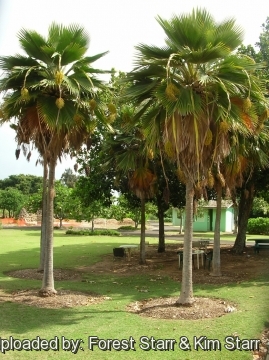 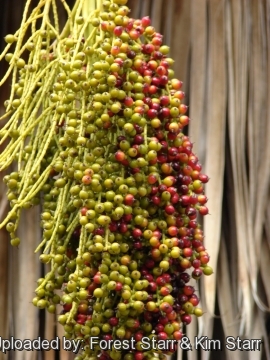 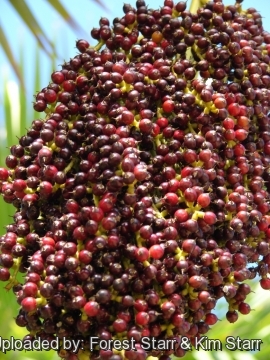 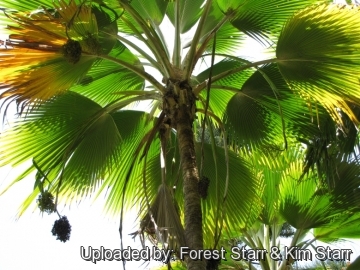 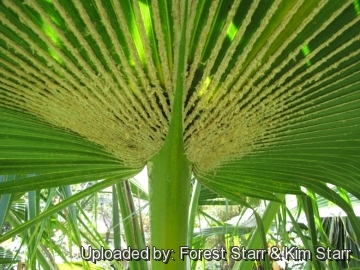 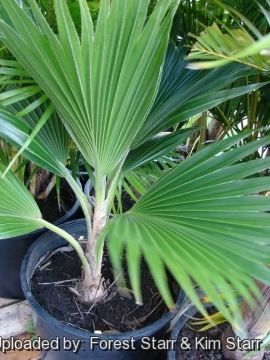 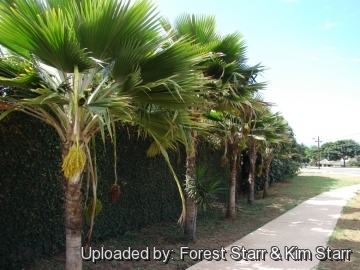 Cultivation and Propagation: According to its habitat Pritchardia thurstonii may be tolerant to salt atmosphere and soils. It is easily grown in sub-tropical coastal areas.
Soil: It is particularly appropriate for coral sand alkaline soil, but is adaptable. Good drainage is also important.
Fertilization: Need a perfect fertilizer diet including all micro nutrients and trace elements or slow release fertilizer. Fertilize often for faster growth.
Water Requirements: It tolerates low levels of humidity, though it prefers evenly moist but not consistently wet medium. When supplied with adequate moisture and fertilizer it is also fairly fast growing. It dislikes soggy soils. The roots and lower trunk can rot if soil is kept too moist. Water young plants for healthy look and fastest growth.
Light: Prefers full sun but will tolerate half day sun.
Hardiness: It is adapted to tropical and subtropical climates. Best kept above 5° C. (USDA zones 10-11).
Maintenance: The dead leaves, flowers and fruits can be removed in a landscape setting for a cleaner appearance. Do not prune the fronds that still have some green colour. Palms recycle nutrients from dead or dying fronds and use them for healthier fronds. Palms only have a set number of new leaves that can sprout and grow per year and removing fronds will not increase that number. If you cut off more than what will grow annually, you could be left with a pretty bare and bald palm. Left in place they form an attractive ‘skirt’ around the trunk.
Wind and salt tolerance: It is very tolerant to salt atmosphere and soils. With a particularly windy climate it is suggested to secure young palm to long solid stakes, to avoid that the wind could bare young and not very developed roots; specimens which are only a few years old might fear intense wind.
Ornamental uses: Even if very rare this species must be cultivated as an ornamental tree, and planted in gardens and parks in tropical and sub-tropical climates either as a single specimen in small groves of three or more palms. It is also frequently used as avenue plant. Culture in containers is possible although growth rates are slower. A bright patio will provide an excellent environment for young specimens which can eventually be planted in a sunny location. Rarely seen indoors.
Propagation: Sow fresh seeds buried half way in pot of clean, well drained potting soil, water daily and keep them at high temperatures (25 to 35 °C). Germinates in 2-4 weeks and seedlings grow well in the right nutrient, temperature, and light conditions. Complete germination is promoted by removal of the outer husk from the seeds. This is most easily achieved by soaking the seeds for at least 24 hours. After removal of the outer husk the seeds can be germinated. Seedling plants of 30 cm can be put in ground/larger pot; Because these palms easily hybridize with other Pritchardias, claiming a specific species requires seed collection from wild populations. Seeds remain viable for 2 or more years.