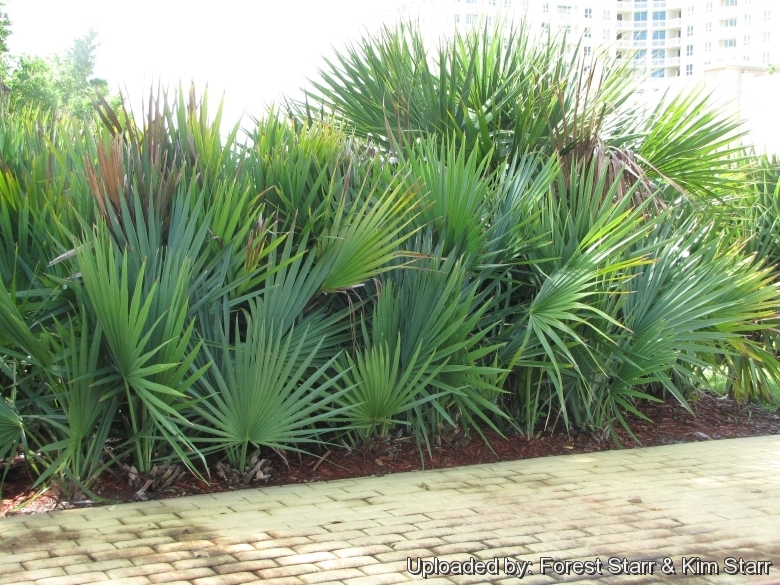 Description: Serenoa repens, commonly known as saw palmetto is a small hardy fan palm that grows in bushy clumps or dense thickets 6 m or more in diameter and 0,6 -2,1 m tall in its more common procumbent form, or 2-7 m tall in plant forming aerial trunks. It is the sole species currently classified in the genus Serenoa. It is very slow growing, and long lived, with some plants possibly being as old as 500–700 years.
Stems: Many-branched, usually sprawling parallel to the soil surface, eventually branching beneath the substrate to form rhizomes. In some populations, it develops an erect or oblique, or arching trunk that may lift the whorl of leaves up to 7 m above ground.
Crown: The cluster of leaves gets about 1,2-1,8 m high with a similar spread.
Leaves: Palmate, without a costa, evergreen, 0,6-1 m across, green or yellowish green (in much of the range) or bluish green, with about 20 leaflets 30–60 cm long that are slightly cleft at the summit. They are similar to the leaves of the palmettos of genus Sabal. The petioles (leaf stems) are about 0,6 m long and sharply saw-toothed hence its common name.
Flowers: About 5 mm across, white, perfect, borne on stalked, dense, compound, tomentose, panicles up to 60 cm long that grow from the leaf axils. Spadix shorter than the leaves.
Blooming period: Spring to summer (between April and July in northern hemisphere). Spadix initiation begins after the danger of frost is past and may be stimulated by rising temperatures.
Fruits: Round to elipsoid , fleshy, drupe, green or yellow before ripening becoming bluish or black when ripe and about 2,5 cm in diameter.
Ripening period: Autumn (September and October in Northern hemisphere)
Remarks: An especially attractive form with silvery-blue foliage which is sometimes referred to as Serenoa repens var. glauca. occurs along the Atlantic coast in Florida and is the form most often grown in gardens and landscapes.

Subspecies, varieties, forms and cultivars of plants belonging to the Serenoa repens group 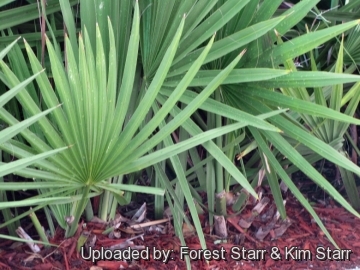 Cultivation and Propagation: Serenoa repens is cultivated in humid tropical, subtropical and warm-temperate regions and planted in gardens and parks. If you needs a small low maintenance, but graceful looking palm, it doesn't get any better than Serenoa repens. Once established, it is virtually maintenance-free.
Soil: It is very adaptable to many kinds of well drained soils. It prefers sandy soils with little mineral or organic content, but may also grow on poor and rocky soils and on peaty and poorly drained sites.
Fertilization: Need a perfect fertilizer diet including all micro nutrients and trace elements or slow release fertilizer applied during the growin season, or according to package directions, using a fertilizer specifically formulated for palms.
Water Requirements: It tolerates low levels of humidity and summer drought, though it prefers evenly moist but not consistently wet medium. When supplied with adequate moisture and fertilizer it is also fairly fast growing. This palm is very drought tolerant once established. It dislikes constantly soggy soils.
Light: It prefers bright sunny locations, but it also does well in part shade with some direct sunlight. It will survive in rather heavy shade but "stretches" to lose its compact shape.
Aerosol salt tolerance: It is somewhat salt resistant and may be grown near the sea if given some protection (behind a dune, building, etc.)
Wind resistance: It endures drying winds.
Hardiness: These palms are some of the hardier palms, tolerating winter frosts down to about −12°C for short periods ( USDA Zones 8-10)
Roots: Usually not a problem
Maintenance: For the healthiest and most attractive plant, keep the palm pruned. As the old fronds die, these should be trimmed off and the leaf bases allowed to dry out, but do not prune if the frond still has some green colour. Palms recycle nutrients from dead or dying fronds and use them for healthier fronds. These days it is popular to remove all but a few of the suckers and to prune the leaves to form a cluster of clear trunked "mini" palms.
Uses: They are used massively in gardening and landscaping in many parts of the world with the silver form being especially attractive. Plant Serenoa repens in front of clumps of larger palms, or even underneath large palms. They look good massed in clumps in mixed borders, or as framing hedges. They are also excellent in containers. And thanks to their drought resistance and durability to heat they can thrive in harsh urban conditions. They can be used for watershed protection, erosion control. The leaves are used for thatching.
Medicine uses: A drug called serenoa can be derived from the partially dried, ripe fruits of saw-palmetto and used as a treatment for benign prostatic hyperplasia or enlarged prostate gland. They are also used as a diuretic to tone the bladder, improve urinary flow, and decrease urinary frequency. They may help prevent prostate cancer.
Food uses: The fruit is edible, but the more green it is the more bitter tasting it would be.
Warning: Do not plant this palm where children play as the sharp sawtooth leaf stems are easily capable of breaking the skin, and protection should be worn when working around a Saw Palmetto.
Propagation: In the nursery it may be propagated by seed. Seeds will germinate in 45 to 60 days. Seedling growth and early development are slow. Establishment requires
2 to 6 years. It can also be propagated by dividing clumps or removing suckers.