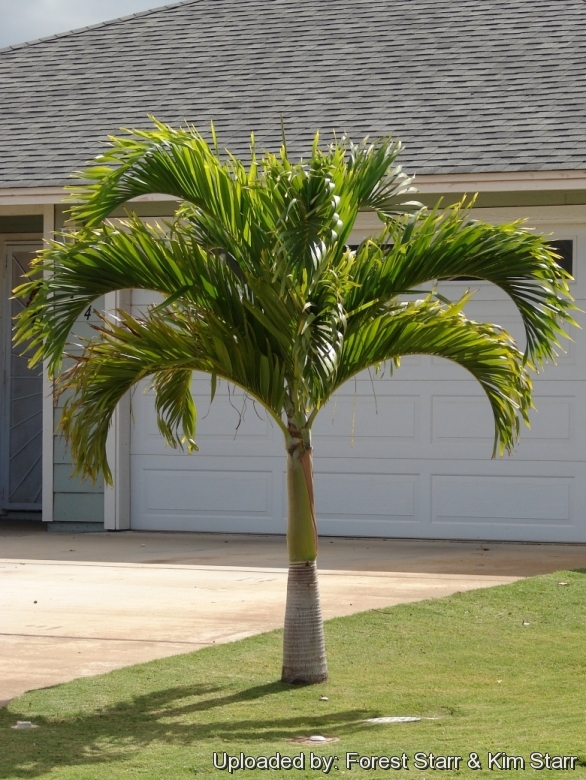 Origin and Habitat: Palawan Island, Philippines and northern Borneo, but widely cultivated in tropical countries such as Hawaii and Florida.
Habitat: It grows in coastal areas in open forest found on steep limestone soils.

Description: Adonidia merrillii is a popular small to medium-sized, single-trunked palm tree that resembles a dwarf version of the royal palm (Roystonea regia) which it matches in beauty if not in size. Christmas palm grows to an overall height of about 4,5-7,5 m, though often much shorter (but some specimens have attained 25 m of height). It is often confused with Ptychosperma elegans.
Stem: Single, upright, slender, resistant, grey, smooth, sectioned by semi-circular leaf scars, 25-30 cm in diameter and swollen at the base. The trunk is self cleaning of old leaves.
Crown shaft: Neatly umbrella-like compact with about 12-14 leaves growing alternate and in spiral with delightful symmetry and with a frond spread about 2-3 m.
Leaves: Odd pinnately compound, with a short tomentose petiole and stiffly arching rachis, evergreen, smooth, deep-green, and about 1.5-1,8 m long with strap-shaped to lanceolate leaflets that are about 60 cm long and 5 cm wide and held in a decidedly V-shaped angle, grow in several planes from the base to about the midpoint of the leaf; then toward the apex, in a single plane; Margin entire; leaflet venation parallel. Leaflet tips are irregularly jagged.
Inflorescence: About 60 cm long from the point at which the crownshaft attaches to the trunk.
Flowers: Small, inconspicuous and not showy, greyish-green to butter-cream coloured. Male and female producing flowers are separate, although they are both present in a single inflorescence. Staminate (male) flowers can contain up to 200 anthers in which the pollen is produced.
Blooming season: Summer.
Fruit: In large bunches, ovoid, fleshy, 3 cm long and half as wide and contain a single seed.
Fruiting period (northern emisphere): The light-green unripened fruits (in autumn) gradually turns to a glossy and brilliant scarlet-red and tend to be that colour in winter, hence the common name Christmas palm. In many tropical countries, these fruits are seen frequently throughout the year. 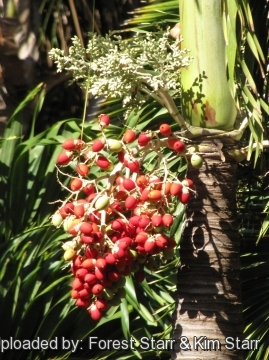 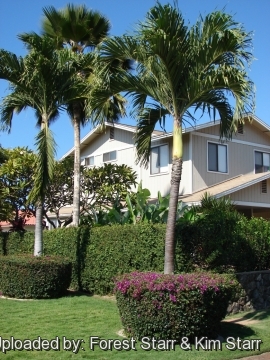 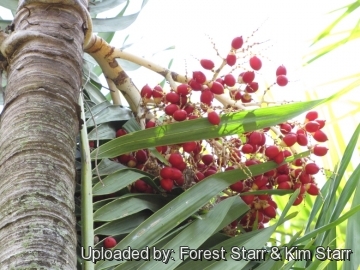 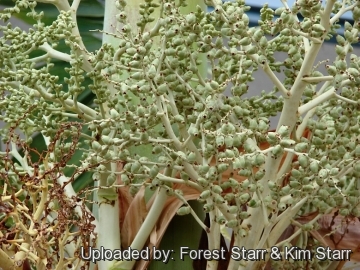 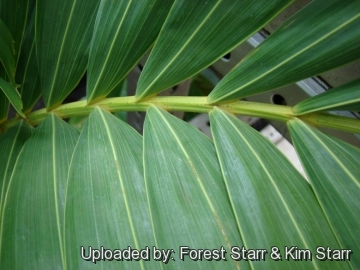 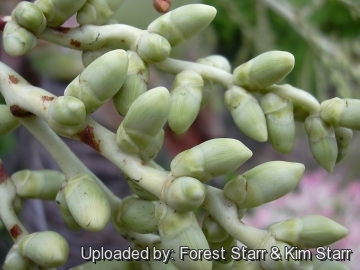 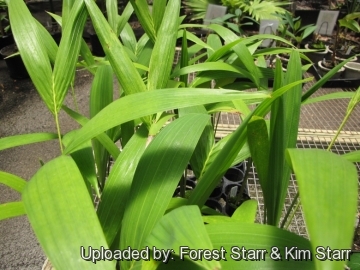 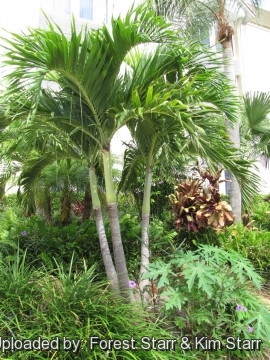 Cultivation and Propagation: This palm is an excellent fast growing garden plant suitable for well-drained soils (clay; loam; sand; slightly alkaline or acidic) except those that are constantly soggy and practically thrive on neglect. Surface roots are usually not a problem. If home-grown, give some sun as with most tropical palms, and water well and feed once monthly.
Light: Prefers full sun but will take some shade.
Drought tolerance: Moderate. This palm appreciates regular waterings but will tolerate periods of drought if not prolonged.
Hardiness: Very cold sensitive, and so it is only really suited to the tropics in frost-free regions (USDA Zones 10-12)
Aerosol salt tolerance: It is moderately salt tolerant.
Maintenance: Remove dried fronds.
Propagation: Fresh seeds germinate quickly within 1 to 3 months and the seedlings are attractive.
Use: Its very neat appearance and stature makes it perfect for use in courtyards, atriums, terrace, specimen and close to swimming pools. It is sometimes closely planted in groups of two or three. Spectacular, when grown as a landscape palm along streets or sidewalks, highways, roadsides, roundabouts and road dividers. It is also used as an indoor décor plant in homes, offices and shops.
Disease & Pests: Hardly bothered by diseases and pests this palm is susceptible to the disease lethal yellowing in certain regions, like Florida and Texas for which there is no effective treatment. Scales can infest and spoil young palms. Lethal Yellowing is thought to be caused by organisms called mycoplasmas that are transmitted by the American palm cixiid, Myndus crudus.