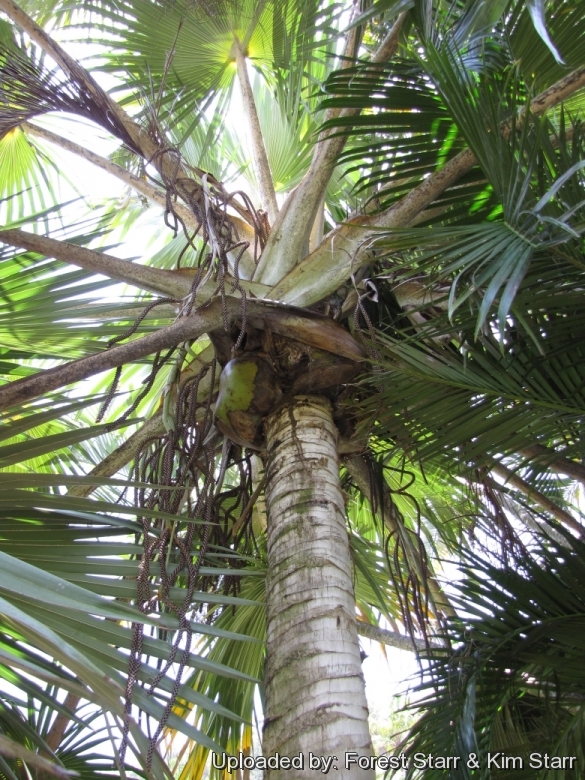 Origin and Habitat: Mauritius (Rodrigues Island in the Mascarene archipelago), where it is confined to Fond la Bonté, Baie aux Huîtres, but it was once very characteristic of the island as a whole. Remaining populations account for about 500 individuals. It is, however, cultivated in other places as an ornamental.
Habitat and Ecology: Latania verschaffeltii grows in cliffs and coastal ravines. This palm is now rare in its natural habitat and threatened by habitat loss. It has disappeared from most parts of it original areal by the action of pigs that eat the seeds, there is almost no evidence of regeneration and the harvesting of leaves by locals for use as thatch is not controlled, despite regulations.

Description: The yellow latan palm (Latania verschaffeltii Lem.) is a graceful medium to tall sized palm with more lax leaves than the other species, Latania verschaffeltii is surely the most stunning in this small genus. It is easily distinguishable, especially when young, by the colour of the the juvenile growth and petioles for which it is named. It is dioecious (Male and female trees are needed to get fertile seeds).
Stem: Solitary stout, grey, lightly ringed, skightly swollen at the base, slowly reaching 12 m in height and 25 cm in diameter.
Crown: Large (to 5 metres in diameter) of 8 to 24 fan-shaped leaves that are green rather than glaucous. It is the only Mauritian fan palm.
Leaves: Palmate, erect, roundish, deeply incised, dark or light green or washed with yellow when young, densely felted, the ribs of the segments yellowish. Petiole 60-120 cm long armed, heavily tomentose, glossy yellow with an orange margin and wax at the bottom. Juvenile leaves have a smooth margin.
Inflorescences: Flower stalk coming from among the leaves, 90-180 cm long.
Fruits: Mature fruit is brown to green, plum shaped and larger than in other Latania species (to 5 cm long). Each fruit contains one to three seeds.
Seed: Round at one end, pointed at the other. The seeds are divided in 3 at the bottom like a "trident". In fact all 3 Latanias are very dictinguishable by their there seeds. The Red Latania (Latania lontaroides) is in fact the easier and quicker to sprout than the 2 others and the seeds are thick and short with little patterns. The Blue Latania (Latania loddigesii) seeds are more nicely patterned and Yellow Latania (Latania verschaffeltii) seeds are long and thin and the patterns are parallel, also at the bottom it ends like a " trident " and the fruits of that are longer and slender than the Blue Latania
Similar species: Latania verschaffeltii is an attractive relative of the Bismarckia palm (Bismarckia nobilis). And an adult palm looks a lot like a green Bismarckia. However, as a seedling it is quite strikingly colourful, having a lot of bright yellow on the petioles. 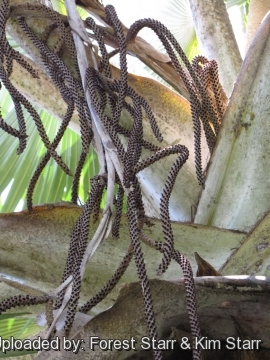 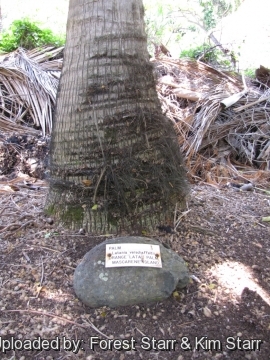 Cultivation and Propagation: The yellow Latania (Latania verschaffeltii) is a very tough and adaptable palm that enjoys sun, heat and dry conditions. This sun-loving palm needs excellent drainage and will survive in warm temperate to subtropical areas. The yellow latania is not so common even rare in gardens and in habitats. Unlike the Blue Latania (Latania loddigesii) which is commonly seen in garden and in nurseries .
Soil tolerances: It likes fertile, sandy soil, but is adaptable to different soil type (clay; loam; slightly alkaline or acidic) and grows even in poor lands, provided they are well drained. The root system of this species is very sensitive and good sized specimen is extremely difficult to successfully dig and transplant to another location.
Growth rate: Usually slow but relatively fast in favourable tropical climates.
Fertilization: Need a perfect fertilizer diet including all micro nutrients and trace elements or slow release fertilizer, but particularly it is needs plentiful of magnesium. If it doesn't get enough magnesium, the leaves take on a rather unhealthy yellow colour.
Watering: It thrives in fairly dry and hot climates, but enjoy also rainy climates and proved to tolerate a wide variety of conditions. In areas where summer rain is prevalent, it seems to put on rapid growth with this ample water, but it does not want to sit in continually wet, mucky soil. When adult, it can bear long drought periods.
Light: Prefers full sun from a very young age but will tolerate half day sun.
Hardiness: Some cold tolerance. This palm has tolerated temperatures down to –2ºC for very short periods. However it can be difficult to get it to look its best without a great amount of heat and sun and so it is only really suited to the tropics, subtropics and in particular favourable Mediterranean microclimates in frost-free regions. (USDA hardiness zones 10b-11)
Aerosol salt tolerance: It is well-suited to seaside locations due to its moderate salt-tolerance, but does a lot better inland then it does on the coast.
Maintenance: Prune diseased, damaged or drying fronds, but do not prune if the frond still has some green colour. Palms recycle nutrients from dead or dying fronds and use them for healthier fronds. Palms only have a set number of new leaves that can sprout and grow per year and removing fronds will not increase that number. If you cut off more than what will grow annually, you could be left with a pretty bare and bald Palm.
Use: It is a plant of great ornamental value either as a single specimen or in groups. Its very neat appearance makes it perfect near highways and used to accent residential landscapes. Plant it in an area where you would like to attract attention. People's eyes will always be drawn to this plant, no matter where it is planted. It can be placed very satisfactorily in situations where a low- growing palm is required. Culture in containers is possible although growth rates are slower. A shade screen patio will provide an excellent environment for young specimens which can eventually be planted in a sunny location.
Traditional uses: In the past it was found in every part of the island, where it was put to a variety of uses. The wood is very hard and durable, of a rich mottled black appearance.
Roots: not a problem.
Pest & Diseases: It is susceptible to lethal yellowing disease, and so should be used sparingly in the landscape.
Propagation: Seed which germinate in about two to four month if fresh and with bottom heat. The seedlings are very attractive.