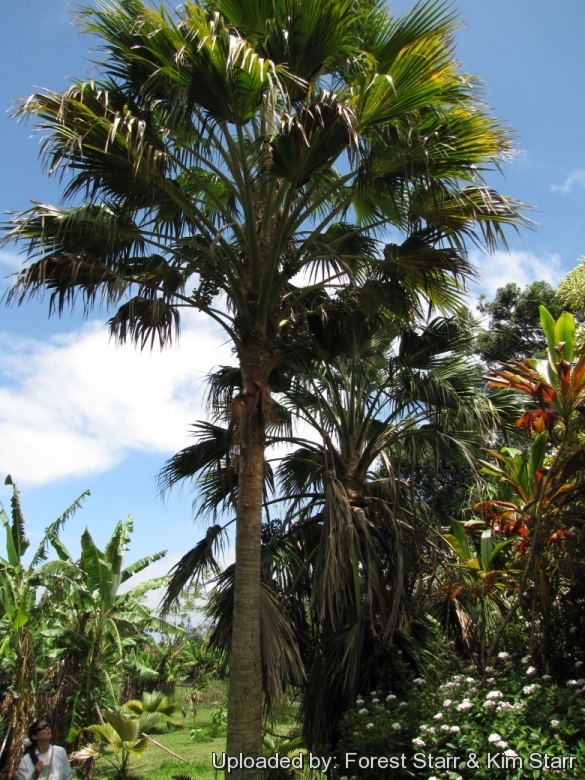 Origin and Habitat: Pritchardia schattaueri is endemic to the southwestern part of the big island of Hawaii, near Kona. United States (Hawaiian Is.)
Altitude range: 600 and 800 metres above sea level.
Habitat and origin: Pritchardia schattaueri is native of cool and cloudy rainforests and mixed mesic forests where it grows on gently sloping, rocky, well-drained soils. The Rainfall per year about 2,000 millimetres. This palm is endangered in its natural habitat and only 12 individuals in three subpopulations remain in the wild, but many plants are now being grown throughout the world. The remaining wild trees are threatened by seed predation, grazing and agriculture. This is a federally listed endangered species of the United States.

Description: Pritchardia schattaueri is a very tall member of this genus (the tallest of the Hawaiian loulu). It has a solitary trunk which may reach heights of 40 metres supporting a large crown over 6 metres across of partially split, fan-shaped leaves with pendulous tips.
Crown: The leaf crown is spherical and dense with about 30 fronds. A distinctive feature of this species is the drooping leaf tips at maturity.
Trunk: 25-40 m tall, with a diameter of 30 cm.
Leaves: 1.5–1.8 m long. Leaf blade semicircular, but eventually more wedge shaped, slightly undulate, divided divided to more than one third with pendulous segment tips, dark glossy green on both sides on the lower surfaces partially covered with light brown, chalky scattered lepidia (fuzz). Petioles 1.8–2.1 m long. Basal margins of petiole with copious fibres.
*Inflorescences: Composed of 1-4 panicles, shorter than or about equaling petioles, when in flower, and in fruit, panicles branched to 2 orders, rachillae glabrous. The yellow flowers, like other Pritchardia spp., are showy en masse.
Fruits: Globose to obovoid, mature fruits are black to brown with brown spots and are from 3-5 cm long and 3-4 cm wide.
Similar species: Pritchardia schattaueri is hard to differentiate from Pritchardia beccariana, but the former has a less branched panicle, more slender inflorescence axes, more divided leaves , and drooping rather than stiff leaf segments. It is also similar to Pritchardia gordonii but the latter differs in having leaf blades with narrower and more deeply bifid segment tips (resulting in the tips appearing more conspicuously pendulous), slightly longer inflorescences equalling or exceeding the petioles in fruit, and oblate fruits. 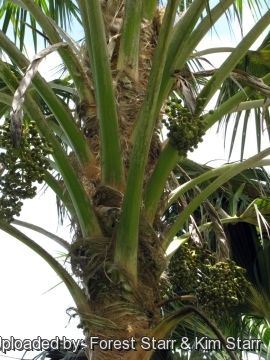 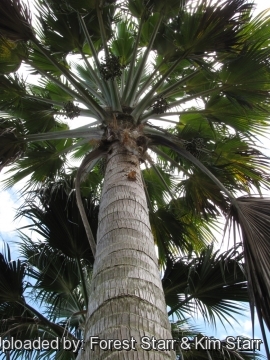 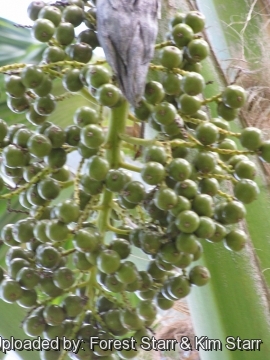 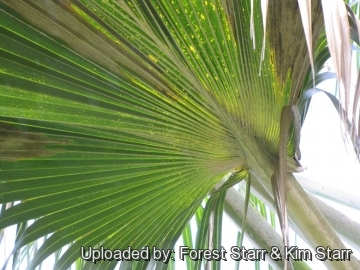 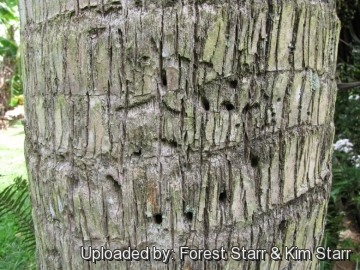 Cultivation and Propagation: Pritchardia schattaueri is an easy to grow palm that likes organic soil, but is adaptable to clay and loam both slightly alkaline and acidic. Good drainage is also important. Specimens raised in dry and/or infertile soils tend to be smaller in stature with smaller leaves. Light also affects the plant's form while those grown in full sun are more compact.
Growth rate: Probably one of the fastest growing of all the Pritchardia spp.
Fertilization: Need a perfect fertilizer diet including all micro nutrients and trace elements or slow release fertilizer. Micronutrient deficiencies are occasional problems. If it doesn't get enough Mn and Fe, the leaves take on a rather unhealthy yellow colour. Micronutrient deficiencies only show up on soil with a high pH. Fertilize often for faster growth
Water Requirements: Needs regular water, do not let dry out between waterings. however it does not want to sit in continually wet, mucky soil. The roots and lower trunk can rot if soil is kept too moist.
Light: Prefers full sun but grows best with some shade at immature stages .
Hardiness: It is adapted to tropical and subtropical climates but seeming to handle some mild frosts for short periods when mature, young plants are more cold sensitive. However it has proven to perform better in hot tropical climates at lower elevations.
Manteinance: Prune diseased, damaged or drying fronds, but do not prune if the frond still has some green colour. Palms recycle nutrients from dead or dying fronds and use them for healthier fronds. Palms only have a set number of new leaves that can sprout and grow per year and removing fronds will not increase that number. If you cut off more than what will grow annually, you could be left with a pretty bare and bald palm.
Early Hawaiian Use The hard wood of the trunk were fashioned into spears. The trunks loulu were notched for climbing to gather the immature fruits and fronds. Older specimens still bear notches that can be seen today. The fronds were used for thatching and as plaiting such as papale (hats) and fans.
Food use: The young fruits called hāwane or wāhane are edible and can be eaten after being peeled. The flavor of fruit with the soft interior is similar to coconut.
Ornamental: It is cultivated as an ornamental tree, and planted in gardens and parks in tropical and sub-tropical climates either as a single specimen or in groups. Culture in containers is possible although growth rates are slower. A bright patio will provide an excellent environment for young specimens which can eventually be planted in a sunny location.
Propagation: Seeds. Fresh seed germinates in 3 to 4 months with bottom heat.