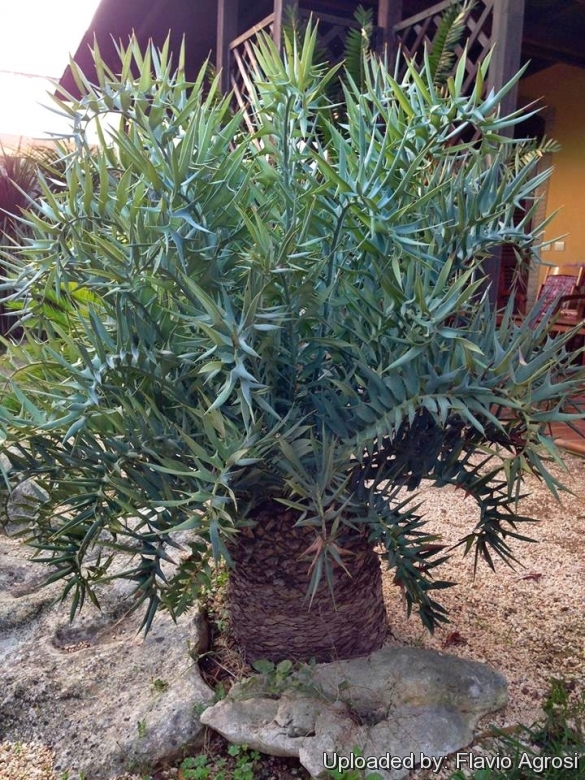 Origin and Habitat: Port Elizabeth (extinct) and Uitenhage district, Eastern Cape Province,South Africa.
Altitude range: Occurs from 100 to 400 metres above sea level.
Habitat and ecology: Encephalartos horridus usually occurs in dense thorny scrub, on deep fertile soil and open rocky quartzite ridges. The climate is warm year round, average annual rainfall in the range of 250 to 600 mm per annum and summer temperatures up to 40 °C. The now extinct subpopulations north and west of Port Elizabeth probably occurred in Sandstone Fynbos. E. horridus is now extinct in several parts of its former range where it has been totally eliminated by urban development. Substantial numbers have also been removed by collectors in the past 50 years. It is difficult to estimate what proportion of plants have disappeared but it could be as high as 50%. Cycads have few natural enemies, however in the wild they can be subject to predation from animals such as porcupines, baboons and certain insects. Although the Eastern Cape Blue Cycad can reproduce by suckering, more commonly reproduction requires insect pollination. Once seed cones have been pollinated seeds are spread by animals that eat the fleshy cones. Encephalartos horridus are now available as a result of commercial distribution in nurseries and gardens throughout the world.

Description: Encephalartos horridus (Eastern Cape blue cycad ) is an unusual, low-growing, species with extremely rigid, very sharp, curling, and spiny leaves that are silvery-blue once they mature and pinkish when they first flush out. The toughened foliage is so stiff and hard, and so well armed with spines that the plants are used to form living live-stock fences in southern Africa to keep predators at bay. It forms suckers freely and usually forms a single bluish-green cone.
Distinctive characteristics: It has no stem. Leaves are bluish-grey with top third recurved. Leaflets are deeply lobed and twisted. In the wild there is evidence of distinct variation within the species, including a possible 'dwarf' form found around Port Elizabeth
Derivation of specific name: The specific name derives from the Latin “horridus, a, um” (horreo) 'bristly, horrible', the plant has a spiny appearance.
Stems: Unbranched or more usually branched from the base, mostly subterranean. sometimes partly exposed for about 30 cm (very rarely for up to 1 m tall, 20-30 cm diameter), covered with rough leaf-bases, the crown slightly villous.
Leaves: Glaucous 50-100 cm long, numerous in a crown, rigid, straight or nearly straight and much recurved towards the apex, very prickly, with a large pulvinus or swollen base. Petiole up to about 13 cm long. Petiole and rhachis glabrous. Leaflets spaced in lower half of leaf, closer in the upper half, reduced in size and entire to­wards base, thick and rigid, obliquely ovate-lanceolate, each with 1-3 sharply pointed lobes in different planes, to 10 x 2.5 cm (5 cm including the lobes), the middle leaflets, obscurely nerved, contracted and shortly decurrent at the base. Cycad leaf development is very fern-like; fronds uncoil from fiddleheads, and in Cycas, so do the leaflets. In fact, it is perfectly correct to refer to cycad leaves as fronds and their leaflets as pinnae.
Cones: Solitary on short stout peduncles, with blackish or reddish-brown adpressed scurfy hairs over green surface.
Male cones: Pedunculate, about 30 cm long and 6-7 cm diameter, cylindric, slightly tapered at both ends; scales somewhat irregularly rhomboid, about 3.5-4 cm across and 18 mm high, very slightly pubescent.
Female cones: Shortly pedunculate, broadly oblong-ellipsoid, more or less triangular at the top, about 37 cm long and 16-20 cm in diameter; scales in 8–10 spirals, more or less hexagonal, about 5 cm broad, with an irregularly rhomboid flattish or depressed top and very rugose surface.
Seeds; Oblong, sarcotesta pale red or carmine, about 3.5-5 cm long and about 2-5 cm in diameter, slightly angled by compression, with fleshy beak.
Similar species: Encephalartos horridus is similar to Encephalartos trispinosus and Encephalartos latifrons, but the former has green leaves, which are not recurved and leaflets lobed only in top third leaf, while the latter has stem 2.4-3 m high. Leaves not glaucous. Leaflets distinctly broad. Female cone larger, about 60 cm long, the upper part not fertile. 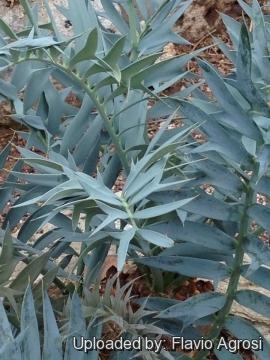 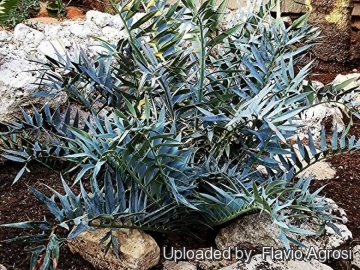 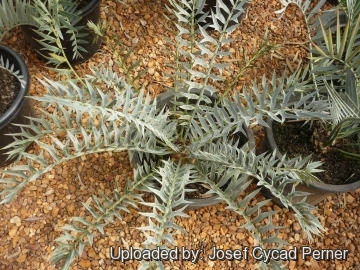 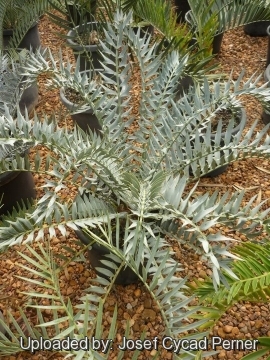 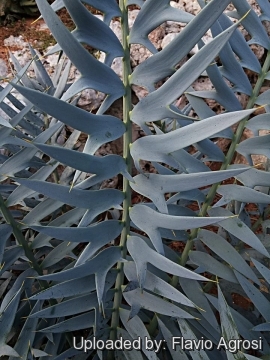 Encephalartos horridus Photo by: Flavio Agrosi
Send a photo of this plant.

Cultivation and Propagation: Encephalartos horridus is an adaptable plant well suited to warm temperate and subtropical climates, and can handle light frosts. It can be grown in full sun without its leaves burning. Its beauty and ease of horticulture make it one of the finest cycads for use in the garden. As a garden plant, this cycad will usually hold one or two crowns of leaves, all in good condition.As a seedling, it often loses its previous year's leaves before the new leaves emerge. The seedlings need plenty of room for the tap root to develop and require very good drainage.
Growth rate: It is a long lived slow growing plant taking 15 to 20 years for one of these to produce a cone, so patience is a must.
Soils: It responds well to deep, fertile, slightly acidic, well drained, soil enriched with compost.
Waterings: In cultivation prefers plenty of water, especially in dry weather for optimal growth. But it is eventually drought resistant.
Fertilization: Naturally undemanding for nutrients, it responds very well to regular applications of fertilizer. Growth can be greatly improved through the application of fertilizers. Most growers find that a fertilizer having an even NPK (Nitrogen, Phosphorus, Potassium) balance, and supplemental trace elements, provides a good start for cycads.
Exposure: It will grow in partial shade, however best results are obtained growing the seedlings in full sun.
Warning: Seeds are poisonous.
Hardiness: They do best in a tropical or sub-tropical climate and should be kept totally dry in winter at or around 10°C but demonstrate a remarkable degree of cold resistance and may tolerate light frost for short periods if dry, however heavy frosts would probably be fatal.
Propagation: Plants are available from nurseries in many areas, however they are also easy to propagate from seeds. They can also be propagated from suckers with some patience and experience.