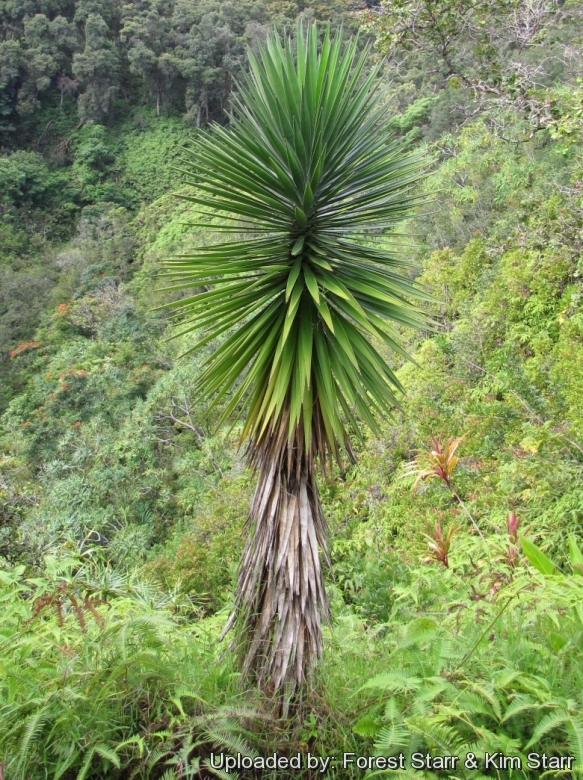 Origin and Habitat: Yucca aloifolia is native to the Atlantic and Gulf Coasts of the US and Mexico from North Carolina to the Yucatán, and also to Bermuda. It is also naturalized in Bahamas, Argentina, Uruguay, Italy, Pakistan, South Africa, Queensland, New South Wales, Mauritania, and most of the West Indies.
Altitude range: from sea level to 1800 metres.
Habitat and ecology: It grows in sandy soils, especially on sand dunes along the coast, shell mounds near coasts or near brackish or salt marshes. It can sometimes be found inland in sandy pine forests.

Description: Yucca aloifolia, called dagger plant as well as Spanish bayonet, is an erect arborescent species, simple or densely branched, with at its termination or the end of each branch a rosette of very sharp-pointed, rigid leaves, their margins finely-toothed, but without loose filaments. It sometimes attains a height of 7(-8) metres, but under severe climatic conditions it will usually grow as a robust shrub. The leaves are fairly thin, dagger-shaped and very sharp-tipped. The stems are covered in the remains of the old, dry leaves. Inflorescences are borne erectly, but many widely cultivated forms of the species are shy to flower if grown away from their habitat. The flowers are large, and showy, waxy and white sometimes tinged purplish, so that the plant is popular as an ornamental. Unlike Yucca elephantipes, the stems of Y. aloifolia often topple over to snake along the ground or over surrounding plants, unless they are mechanically supported.
Stems: 1–3, erect or somewhat declining, simple or sparingly branched.
Leaves: Leaf blade lanceolate, thick, rigid, erect, smooth, dark green to yellow-green, flattened or slightly concave, thick, 12–40 cm long, 2.5–6 cm wide, margins rather horny, sharply denticulate or entire, rarely filiferous with straight fibers. Leaves spreading terminating with a very stif point, bending downward from base with age.
Inflorescences: Pendent, paniculate, arising 1/4–1/2 within rosettes, somewhat conical, 45–60 cm tall, glabrous or slightly pubescent; peduncle scape-like, to 30 cm.
Flowers: Dandling, to 7-10 cm cm long and 5 cm in diameter; perianth globose six parted; tepals spreading, connate basally for less than 1 mm, creamy white marked with a streak of green or purple down the centre of the outside of each petal near base, lanceolate, 3–4 cm long, 1.2–2.2 cm wide. Filaments ca. 8-20 mm long slightly papillose. Anthers 2–3 mm; pistil light green, 3-4(-5) cm long, 8–10 mm in diameter. Ovary three sided, oblong, basally constricted, 1.5-5 cm long. Style 5 mm; stigmas distinct.
Blooming season: Summer to Autumn.
Fruits: Pendent, baccate, elongated, elliptic-prismatic, without core, three or more celled with a small hole at the end of each, not opening at maturity, 35-50 mm long, 22-26 mm in diameter, blackish with fleshy, succulent, purple pulp
Seeds: Dull black, round-ovate, 5–7 mm in diameter, 2-2.5 mm thick.
Note: Yucca aloifolia has been widely cultivated, and horticultural forms (or varieties, depending upon the source) differ in the striping of yellow and white on the leaves. There is a close relationship between this species and Yucca gloriosa.

Subspecies, varieties, forms and cultivars of plants belonging to the Yucca aloifolia group 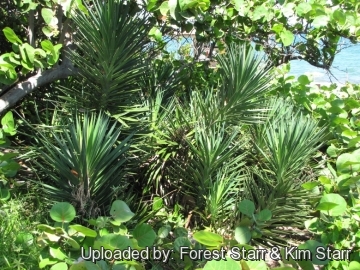 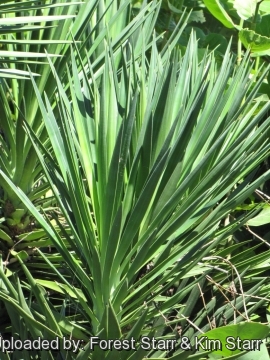 Cultivation and Propagation: Yucca aloifolia is a carefree and durable plant that become the centre of attention when it blooms. It give the landscape a distinctive desert flavour. The bladelike leaves add vertical structure to a cactus or xeriscape garden. This species is tolerant of drought, frost and heat. Like their counterparts, these yuccas have needle-tipped leaves, so don't plant them near play or walk areas.
Soil: Plant in fast draining soil but can be established in virtually any type of soil . It is adapted to a dry environment, but has a good tolerance to moisture and humidity when planted in a well-draining soil.
Waterings: Provide little or no water in winter. Treat like a succulent. However, they grow faster if watered well (don't water the crown, though they rot easily). In the garden they should be placed in a sunny, well-drained area with additional summer water in dry climates.
Exposure: They thrive best in full sun, but can be grown with some shade and humidity, but may become leggy.
Hardiness. Best where winter temperatures stay above 0° C, but is hardy to around -10 . Plants in containers can be moved inside during longer cold spells.
Manteinance: Remove dead fronds and spent fruiting stalks for a clean landscape appearance. The dried leaves - and even green ones - can be easily removed from the stem by a strong downward jerk. This is especially advisable if the plants grow near human traffic where the unsuspecting passer-by is sure to be pierced by the sharp-tipped leaves.
Garden uses: These make great specimen plants for xeriscape gardens and blend well in either tropical or arid gardens. Small plants are relatively inexpensive, but larger ones are a fortune. These make excellent potted specimens, and their symmetrical form provides a striking focal point, ans display wonderful shadows when illuminated by night lighting. In cooler climates they thrive well in gravel garden, as they have proven quite hardy because of the excellent drainage.
Propagation: The species is easy to propagate from stems or truncheons.