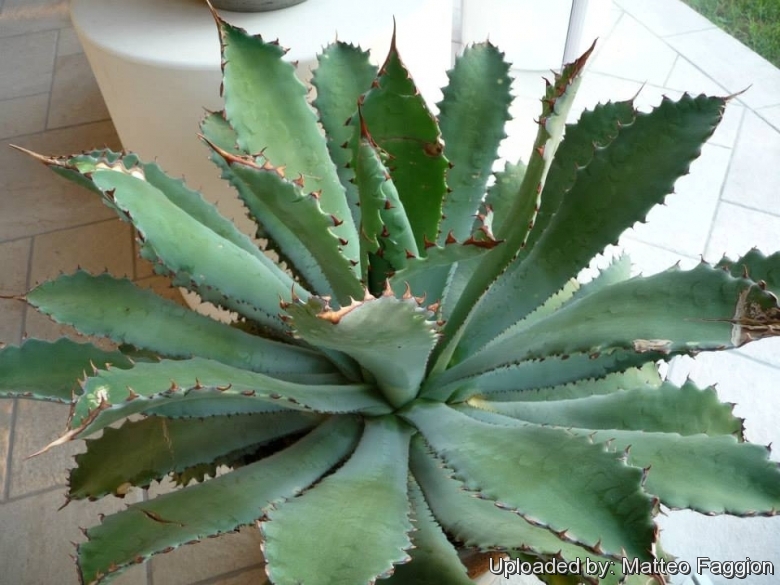 Agave guadalajarana Photo by: Matteo Faggion
This species barely reaches 60 cm in diameter and produces few offsets (if any). Undulations on the leaf or "bud printing" occurs when leaves imprint on each other due to pressure in the conical bud.

Origin and Habitat: Agave guadalajarana is known only from the environs of Guadalajara region of Jalisco state, and the Ceboruco volcano area of Nayarit state, in Mexico.
Altitude range: Around 1,500-2000 metres above sea level.
Habitat and ecology: Grassy slopes of oak woodland on volcanic rocky soils but the plants often thrive on the slopes in almost pure rocks. The climate is an open one below the Tropic of Cancer with a protracted dry season from January to May. It is associated with cacti and succulents.

Description: Agave guadalajarana is a usually solitary small tightly formed Agave, but suckers occasionally. It forms compact rosettes 25-50 cm tall by 35-75 cm wide (or more), broader than tall. It holds a lot of leaves for a larger Agave; these are paddle- shaped, widest above the middle, grey-green with distinctive overlapping marks. The edges of the leaves are conspicuously mammillate toward apex with big spines and they end each in a thick brown thorn. The species is often confused with a similar species, Agave inaequidens. It is also similar to Agave colorata, but differences in shape, size and leaf structure can be seen.
Stem: Acaulescent.
Leaves: Numerous, closely imbricated, light greyish green, frosted blue greyish, some nearly white, variable, wide, short, flat, rigid, ovate to elongated, obtuse, 20-30 (or more) cm long, 8-12 cm wide, slightly up-curved, the inner shiny glaucous, the outer dull grey, closely imbricate. Leaves interestingly display prominent imprints from unfurled leaves. Leaves margin mammillate with evenly large, orange, dark red-brown to dusty grey, jagged teeth along the margins that become more numerous and larger toward the leaf tip. The the upper teeth 8-10 mm long have often small spines embedded in them, those from the mid-leaf to base much smaller, 3-4 mm long, 5 to 10 mm apart on nearly straight margin. Apical spine short, attractive up to 2.5 cm long, subulate, greyish, straight to sinuous, flat to shallowly hollowed above, roundly keeled below dark red-brow to tan.
Inflorescence: The inflorescence is a straight to curved, slender panicle, 4-5 m tall with 15 to 20 loose, irregularly arranged branches (small umbels) in upper half of shaft.
Flowers: Up to 60 mm long. The tepals are usually twice longer than the tube.
Fruits (capsules): 3-chambered, variable-shaped, c. 4.5 cm long, 1.8 cm wide, stipitate, shortly beaked, thick-walled, freely seeding.
Seeds: Lunate (moon shaped), 6 mm long and 4 mm wide. 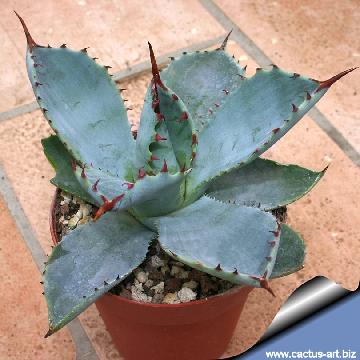 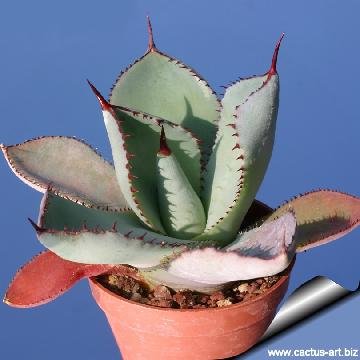 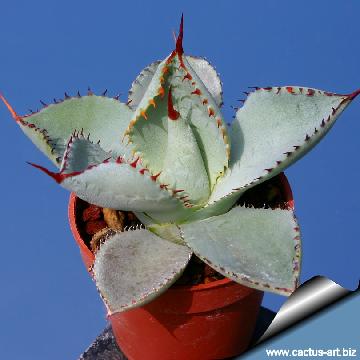 The young plants are quite different from the adults, but are however very lovely too. Photo by: Cactus Art
Send a photo of this plant.

Cultivation and Propagation: Agave guadalajarana is cultivated as an ornamental plant. It is a stunning specimen plant for containers or a well drained spot in the garden noted as rare in cultivation. This species produces few offsets (if any).
Growth rate: It tend to be slow grower, but worth the effort.
Soil:* Grow them in porous soil with adequate drainage. Multiple fertilizations is good during vegetation and the plant is best grown in a decently sized container.
Exposure: They do well in full sun or a lightly shaded area.
Water requirements: Water thoroughly when soil is dry to the touch. In winter watering this plant can be done once every 1-2 months, there is no need to mist the leaves.
Hardiness: It is cultivated in Central Europe and theoretically hardy to -18° C (or less?), particularly when dry but it is best to avoid severe freezing temperatures.
Heat Tolerance: Excellent.
Propagation: Relatively easy to propagate by seeds or by suckers (if available). Easy to grow, it is best propagated by seed directly into the intended soil for the adult plant. Remove the basal suckers in spring or summer and let the cuttings dry for a few days before inserting in compost, only problem is the logistics of getting to the suckers - sharp spines and suckers usually right up against, or underneath the mother plant.
Uses: These striking plants are wonderful when used for accent or simply to provide some all year round foliage colour and often used in a pot as a patio plant, they make an eye-catching statement and along with other evergreen plants in pots, can be moved around to change the scenery or position to give more shelter.