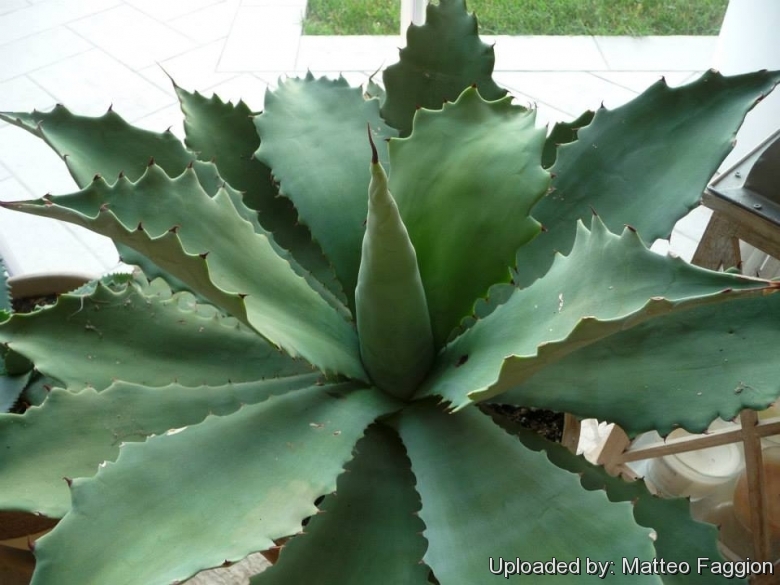 Description: Agave pachycentra is a magnificent, large Agave with broad light green leaves. It is highly variable in leaf size, form, armature, and coloring.
Rosette: Stemless rather open medium-sized to rather large up to 2 m in diameter.
Leaves: Broadly lanceolate 15 to 20 cm. wide, 35 to 60 cm long, very light green, pale blue or nearly white, with heavy recurved blackish thorns along their margins. However the leaves are quite variable on different variants of the species and can bear different coloured teeth and spines; the red brown ones look particularly attractive on the fresh green of the leaf-lamina. The apical spine is large dark reddish-brown to grey 8 mm wide and 50 to 60 mm long.
Inflorescences: Flowering stalk, crooked with loosely flowered, open panicles with small yellow umbels. 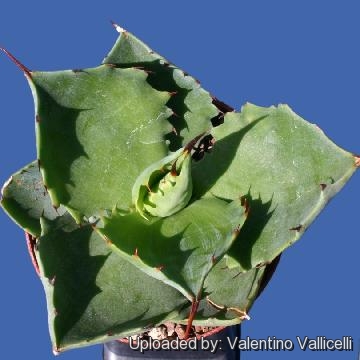 Young specimen. Photo by: Valentino Vallicelli
Send a photo of this plant.

Cultivation and Propagation: Agave pachycentra is a more tropical species that tolerate both drier conditions and an occasional very light freeze, but likely it will depend on from where this wide ranging plant was collected.
Growth rate: It is a relatively rapidly growing species given the best conditions.
Exposure: They do well in full sun or a lightly shaded area with afternoon shade.
Soil: They do best in very well-drained, sandy or gravely soil. As ornamental they are also grown in containers where they stay much smaller than their outdoor brethren. In pots they need a very porous mix soil (e.g. 2 parts peat moss to 1 part loam to 1 part of pumice).
Repotting: Use pot with good drainage.
Fertilization: They grows quickly if kept well nourished with a slow release fertilizer specifically formulated for cactus and succulents applied once or twice a year (poor in nitrogen), including all micro nutrients and trace elements.
Hardiness: Keep it in a cool, frost-free area in winter and put it out on the balcony or patio in summer. It grows fairly fast in summer if provided with copious water but allows to dry thoroughly before watering again. During the winter months, one should only water enough to keep the leaves from shrivelling.
Scenography: They are usually cultivated outdoors in tropical rock gardens, in cactus and succulent gardens, in borders, or as a specimen. These striking plants are wonderful when used for accent or simply to provide some all year round foliage and often used in a pot as a patio plant, can be moved around to change the scenery or position to give more shelter.
Warning: It is armed with sharp spines.
Propagation: Seeds