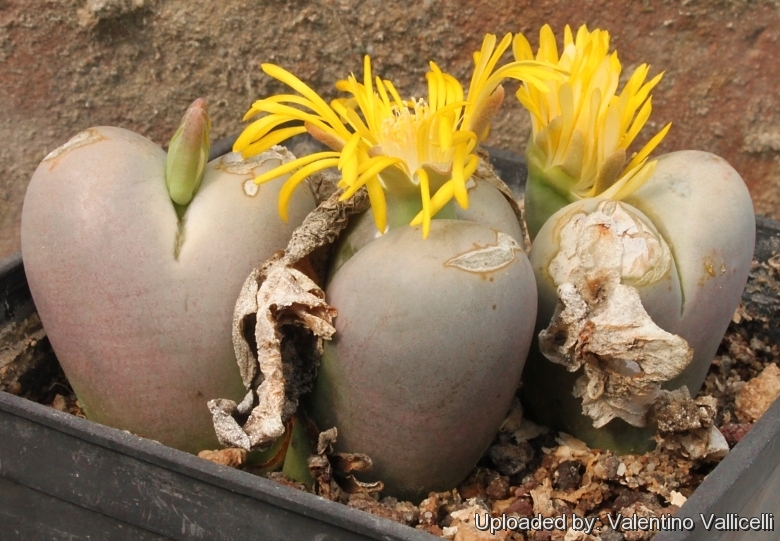 Origin and Habitat: This peculiar species originally appeared among seedlings grown in the Steinecke Nursery, near Stuttgart, Germany. The origin of the seed is uncertain, though it probably came from Namibia. The plant has never been discovered in habitat.

Description: Lithops steineckeana is a small stony-marble looking, greyish and variable species. It is almost certainly an intergeneric hybrid whose parents has not been clearly identified, one of the parents was surely a Lithops species (possibly Lithops pseudotruncatella) while the other parent could be an unknown Conophytum species. This is also confirmed by the fact that some of the seedlings look like typical pseudotruncatella, at least when still very small. Moreover the steineckeana seeds do not give all true looking steineckeana as they are crosses, and this seems true even of bought seed, only a few look right. In autumn it produces relatively small bright yellow flowers.
Distinctive characteristics: As might be expected of a hybrid, this differs in a number of respects from all natural species of Lithops. Typically it has ovate bodies and the top surface usually convex and distinctly rounded.
Habit: It is an acaulescent perennial, geophytic, succulent, solitary or forming small clumps mostly of 2 heads and up to 3 cm high, occasionally with up to 4 or more heads.
Bodies (Paired leaves): Small to medium sized, compact, less than 23 mm long, and 19 mm broad, leaves ovate-cordate in profile, lobes slightly divergent, fissure reduced to a groove over the curve of the face, only about 1 mm deep, occasianally deeper and dividing the top of the plant into two divergent ovoid lobes. Lobes (usually) conjunct or revealing the transluscent tissue of the cleft. Faces dome-shaped round-elliptic, lobes equal smooth opaque pale grey, buff or cream, tinged with pink, pale yellow or light orange-brown, sometimes flushed with more intense orange-brown around the margins. Margins usually absent or only vaguely distinguishable. Channels and islands not distinguishable. Windows reduced to a small obscurely transluscent pale grey or greenish grey area on each lobe often absent. Rubrications orange-red to rust-brown only visible sometimes in windowed specimens. Dusky dots few greenish grey only in windowed plants. Shoulders usually greyer and duller, lighter or darker than faces.
Flowers: Diurnal, daisy-like, small to medium, up to 32 mm in diameter, but usually less than 25 mm, golden yellow.
Blooming season: Late autumn.
Fruit: Capsules mostly 7-chambered, profile boat-shaped to almost spherical, top strongly convex, faces round.
Seeds: Light brown to brown rugose.

Subspecies, varieties, forms and cultivars of plants belonging to the Lithops steineckeana group 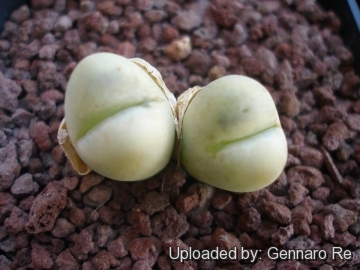 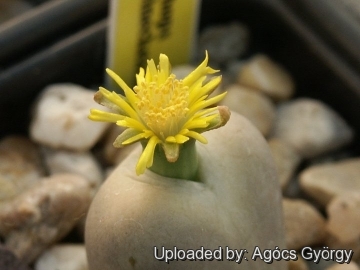 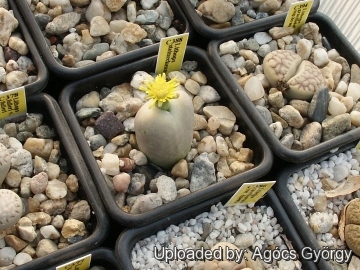 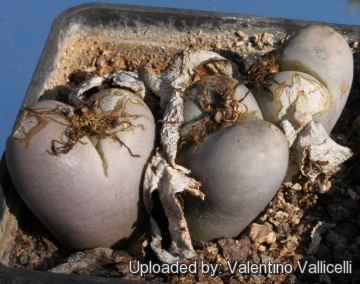 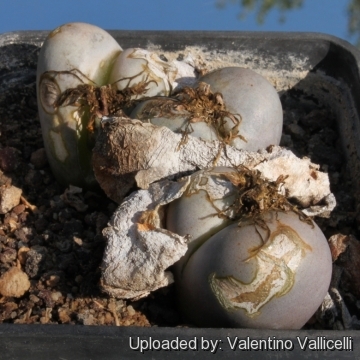