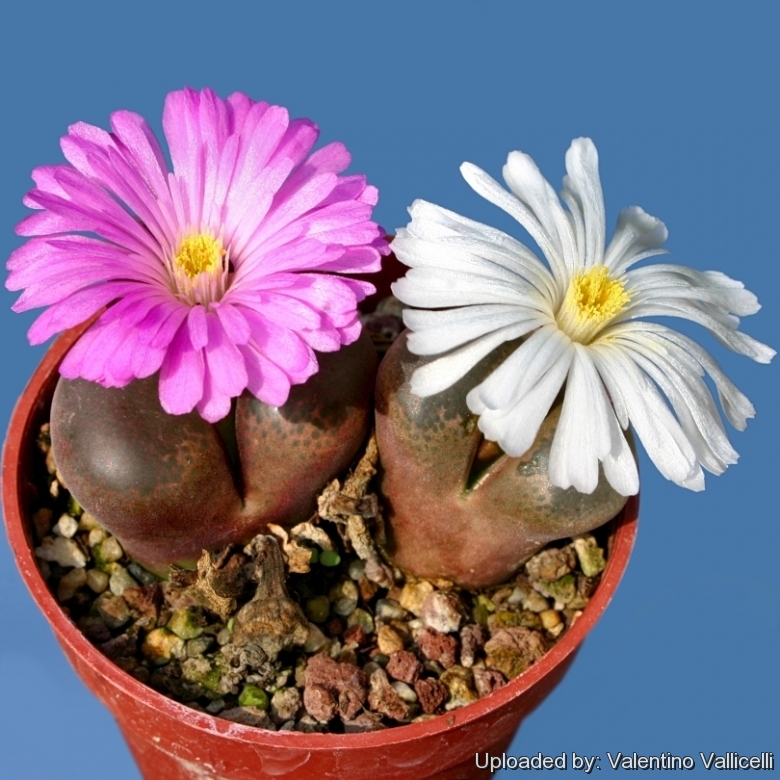 Origin and Habitat: It occurs fairly extensively in Northern Cape Province and Southern Namibia (Type locality: In the vicinity of Warmbad)
Habitat: It grows at ground-level or subterranean in quartz fields.

Description: Conophytum friedrichiae is a tiny stemless perennial succulent. In its habitat it is usually single but, especially in cultivation, may forms mounds of purple or green grapes. This species is however very variable in shape and colour. Conophytum friedrichiae was the first of the “ophthalmophyllums” to be discovered and remains the fundamental species in its group. This species must be one of the finest of the genus and also one of the most interesting of the many small Mesems.
Bodies (paired leaves): Cylindrical, 2-3 cm long,1.4-1,6 cm wide, 1-1,2 cm thickwith the fissure between the leaves extending completely across body. Lobes distinctly but roundly keeled, smooth, glabrous, soft to the touch, reddish-brown (usually), purple or almost pure aquamarine-green, coppery in the resting season, with a very translucent and shining large window clear as water crossing the whole leaf top that, at the base, merges into several lighter dots.
Flowers: Usually pinkish but also reddish mauve or pure white, usually 1-2 cm in diameter (but occasionally up to 3 cm in diameter).
Remarks: Similar transparent windows, as been described for Fenestraria rhopalophylla and certain species of Conophytum ( e.g. in Conophytum maughanii)

Subspecies, varieties, forms and cultivars of plants belonging to the Conophytum friedrichiae group

Notes: Conophytum/Ophtalmophyllum These plants forms a group within the large genus Conophytum and for a long time they was considered a separate genus, Ophthalmophyllum. Generally the Ophthalmophyllums look like they are formed from glass, ranging in colour from coke-bottle green to brown, to quite reddish. Some of these plants remain solitary, others clump quite readily; some are touchy in cultivation, some grow easily. They all resemble each other and are easy to recognize as a group. They include species such as Conophytum friedrichiae, Conophytum limpidum, the slightly fuzzy Conophytum pubescens, and the clump forming Conophytum praesectum. 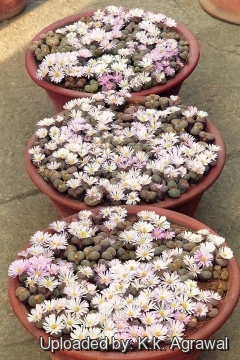 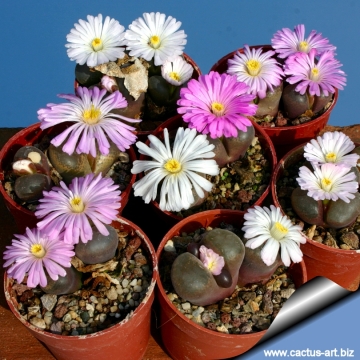 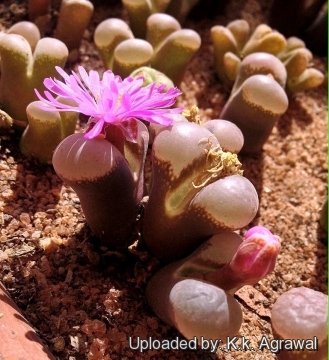 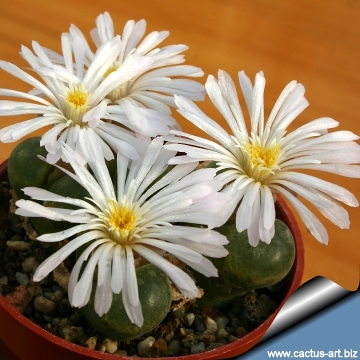 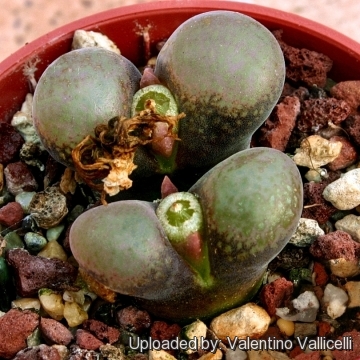 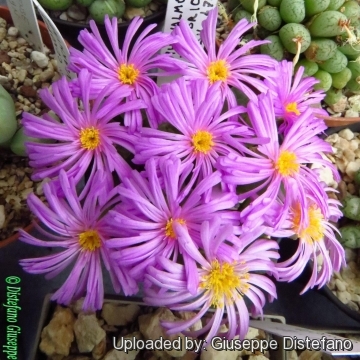 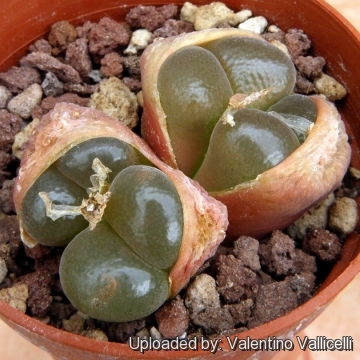 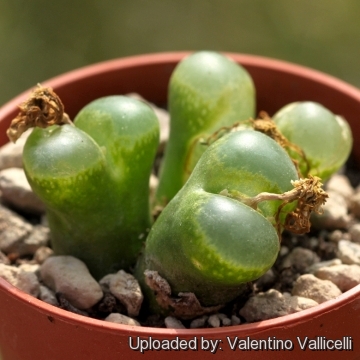 Cultivation and Propagation: The Conophytums belonging to the Ophthalmophyllum group are some of the world's most fascinating plants and are sought by the collector of succulent plants. They grow on winter rain and heads for summer dormancy. They are notoriously difficult to grow because they rot very easily, but Ophthalmophyllum friedrichiae is not so difficult. Paying attention to the particular growing requirement of Ophthalmophyllum is especially important. If you provide the Ophthalmophyllum with the right conditions, they will reward you with their unique shape, size, colour and a proliferation of blooms in autumn. However, Ophthalmophyllum are tricky plants that are very particular about their growing conditions and require the right maintenance in order to keep happy. But don't be afraid even the best growers have plants that mysteriously dry up, or leave during the night. While Ophthalmophyllum are picky about their care, if you are patient and remember the basics, your efforts will be rewarded. Being small plants, a representative collection can be grown on a patio table, a sunny windowsill or a shelf in the greenhouse.
The growing season in northern hemisphere is from September to March.
Soil: It grows best in sandy-gritty soil and requires good drainage as it it is prone to root rot. It can grows outdoor in sunny, dry, rock crevices (protection against winter wet is required) It can also be cultivated in alpine house, in poor, drained soil.
Repotting: Repotting every year is not recommended. They may stay in the same pot for many years. Plants grown in larger containers have frequently relatively poor flowers. They might improve when the plants are given their own, small individual pots.
Fertilization: Feed it once during the growing season with a fertilizer specifically formulated for cactus and succulents (poor in nitrogen), including all micro nutrients and trace elements diluted to ½ the strength recommended on the label. It thrives in poor soils and need a limited supplies of fertilizer to avoid the plants developing excess vegetation, which is easily attacked by fungal diseases.
Watering: The Ophthalmophyllum thrive in dry and desert regions and are able to stand extended periods of drought and require careful watering. Water minimally in summer, (only occasional misting), water more abundantly after the previous year's leaves have dried up when they are growing in the autumn and spring, but let the soil dry between soaking. Requires little water otherwise its epidermis breaks (resulting in unsightly scars). If grown in a container, bottom watering by immersing the container is recommended. Ensure a very good ventilation. .
Light: It enjoy some shade (avoid direct sun as it grows wild among rocks and under the shade of other plants) and in summer it need to be kept in a cool area.
Hardiness: It prefer a very bright situation and require a minimum temperature 5°C (But will take a light frost and is hardy down to -7° C for short periods if it is in dry soil). USDA zones 9A – 11.
Uses: Container, rock garden.
Pests and diseases: It is vulnerable to mealybugs and rarely scale.
Propagation: It can be reproduced both by seed in autumn or (or rarely) cuttings. Take the cutting from a grown-up mother plant. Each cutting must contain one or more heads along with a fraction of root and permit to dry out a couple of days, lay it on the soil and insert the stem end partially into the soil. Try to keep the cutting somewhat upright so that the roots are able to grow downward. It is relatively difficult to root Ophthalmophyllum from cuttings and generally pointless as well, so quick are they from seed.