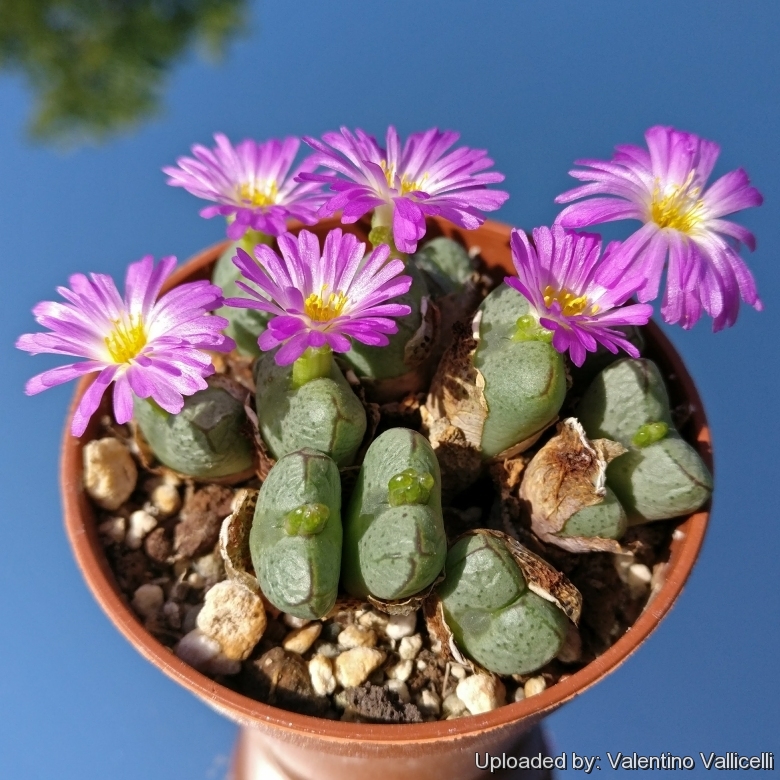 Origin and Habitat: Namaqualand, Northern Cape, South Africa. The species occurs Geelvlei Plateau around Steinkopf and Springbok, the subspecies are geographically well separated (extent of occurance less than10 km²).
Altitude: 1050-1150 metres above sea level.
Habitat: It grows in Succulent Karoo on south-facing granite or quartz cliffs or pans, also in sandy troughs. The species is not threatened.

Description: Conophytum tantillum (subsp. tantillum) is a small densely branched species. Six subspecies are recognized, the nominate form, subsp. amicorum, subsp. eenkokerense, subsp. heleniae, subsp. inexpectatum and subsp. lindenianum. In all forms it is an easy and floriferous species that is allied to Conophytum violaciflorum.
Habit: Plants characterised by small, two-lobed plant bodies forming tight or loose ﬂat mats that “retracts” as summer approaches, and then the sheaths are tightly sealed over the bodies.
Stem: It is almost stemless.
Bodies (paired leaves): Up to 10 mm tall, 8-10 mm in wide and about 6 mm thick, cone-shaped or cylindric below, apex wedged, bibbed, the widely gaping cleft is usually round or elliptical, keels often multiple, epidermis trichomous, greyish-green, yellowish-green or reddish, with green or red striations which widen at each ends, and have prominent dark red margins, sheaths brown very ﬁrm.
Flowers: Petals pink, petals pink, magenta, white, or yellow (mostly white to pinkish in subsp. tantillum). They are simple, daisy-like, early diurnal.
Blooming season: They arise at the beginning of the growing period in September to October. Seedlings are capable of bearing flowers within 2 to 3 years.
Fruit: 4-5 locular.
Note: The subsp. tantillum is polyploid.

Subspecies, varieties, forms and cultivars of plants belonging to the Conophytum tantillum

Cultivation and Propagation: It is relatively easy to grow. These plants grow on winter rain and head for summer dormancy. More or less dormant in summer.
Soil: Use well-drained soil mix.
Water: The plant requires little water; otherwise its epidermis breaks (resulting in unsightly scars). Water throughout the year although minimally in summer, (only when the plant starts shrivelling), but it will generally grow even in summer if given water. Water regularly in winter after the previous year's leaves have dried up. Requires good drainage.
Exposure: Plants prefer morning sun and some protection against afternoon hot sun in mid-summer; it needs full sun or light shade in the other seasons. Keep dormant in summer and keep protected during this period.
Hardiness: Hardy to -2°C. Ensure a very good ventilation.
Maintenance: Avoid to repot frequently. This plant may stay in the same pot for many years. Plants grown in larger containers have frequently relatively poor flowers. It might improve when the plants are given their own, small individual pots. With age the plants can grow raggedly leggy and it is best to renew them from cuttings.
Propagation: It can be reproduced both by cuttings and seeds. Take the cutting from a grown-up mother plant. Each cutting must contain one or more heads, along with a fraction of root.