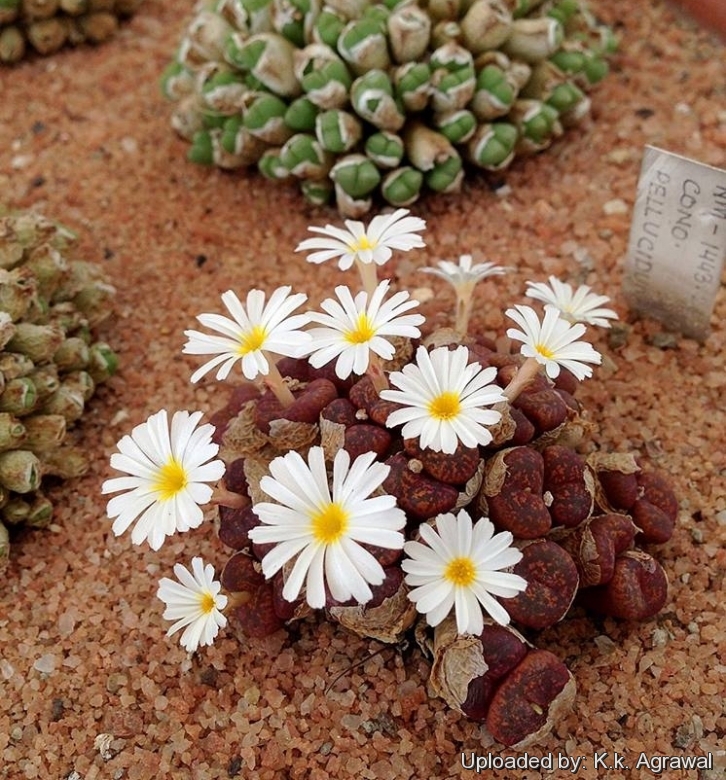 Origin and Habitat: Namaqualand, Bushmanland, northern Cape, South-Africa.
Type locality: Near O'okiep. The classic form, described as Lithops marlothii.
Altitude range: 350 - 1050 metres above sea level.
Habitat and Ecology: It is a specialist species that grows in Succulent Karoo on quartzite slopes or sandy soil, often in crevices or on rocky outcrops.

Description: Conophytum pellucidum is a tiny densely branched perennial-succulent named for its pellucid apex. It is a beautiful and variable species which is very widespread in habitat and it is possible to recognise at sight many hundreds of populations, each showing subtly or even greatly differences. It forms low clumps or mats.
Stem: Stem-less (internodes invisible) or very short and forming rhizomatous branches at soil level.
Bodies (paird leaves): 10-20 mm tall and 6-12 mm in diameter, cylindric to turbiniform (inverse conical), apex of the pair fused, not lobed, rather concave to convex, glabrous, bullate or finely papillate, upper surface with grey-green to coppery-brown island and intricate markings which consist of pale grey to brown branched windows sometimes fleetingly blood-red; fissure short or long, grey-green, slightly sunken, papillate. The dried leaves blend in very well with their surroundings and look more like small pebbles than anything else.
Flowers: Diurnal, scentless typically white with a yellow throat but occasionally plants with a white throat can be found. Light or dark purple flowers are also known either as discrete populations or mixed in with whites. Calyx-tube membranous, 6mm long, greenish to brown, with 4-5 brown sepals; corolla-tube to 15mm long, narrow, whitish to pink or golden petals 25-40 in 2-4 series, white becoming "saturated" rose above or concolorous pure white or pink,
Blooming season: Flowers appears in mid to late summer or autumn. They are short-day plant (flowers only when day length is less than 12 hours.)
Fruit: Small, tan coloured usually 4-locular.

Subspecies, varieties, forms and cultivars of plants belonging to the Conophytum pellucidum group

Notes: The conical shaped bodies of Conophytum pellucidum do not easily absorb sunlight, but have translucent window parts in the top surface that allow sunlight to be captured and utilized even when the plant are at the soil level or retracted below the surface of the soil. This is an interesting evolutionary adaptation to overcome this light problem; their leaves are a simple optical system that permits light striking the windows to be diffused onto the green, photosynthesizing surface situated underground. So, with a minimum of exposure to the outside environment, a maximum area of photosynthetic tissue is ensured. 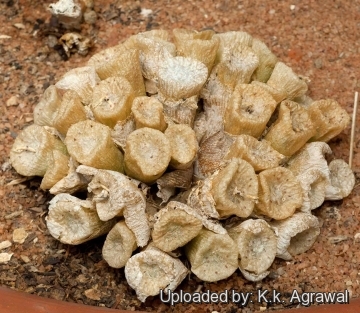 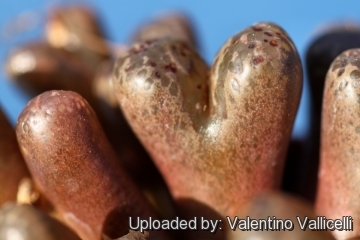 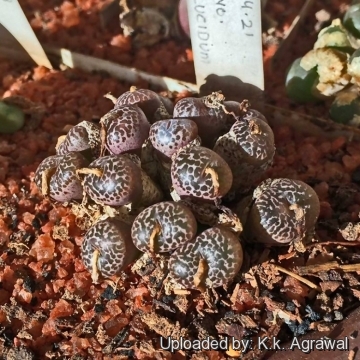 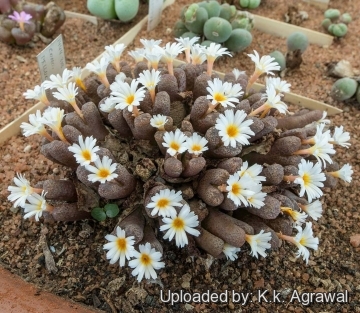 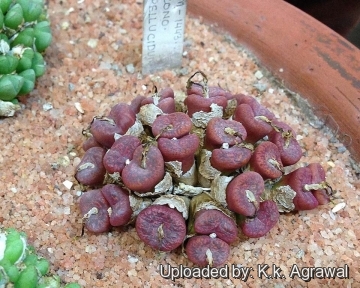 Cultivation and Propagation: They are among the most popularof this genus but relatively difficult to grow. These plants grow on winter rain and head for summer dormancy. The growing season in northern hemisphere is from September to March. During this period they can be lightly watered about once a week or (better) misted every day and will become plump. In Africa, the mist from morning fog provides moisture. Otherwise their epidermis breaks (resulting in unsightly scars). Water minimally in summer, (only occasional misting). Start watering again in autum after the previous year's leaves have dried up. Require good drainage. They enjoy full sun or half-shade and in summer they need to be kept in a cool area. Hardy to -2°C. Ensure a very good ventilation. Avoid to repot frequently. They may stay in the same pot for many years. Plants grown in larger containers have frequently relatively poor flowers. They might improve when the plants are given their own, small individual pots.
Propagation: They can be reproduced both by cuttings and seeds. Seed must be sown in the spring or summer. The seedlings should not be disturbed until they are well rooted, after the first or second year they should be big enough to separate and be planted into their own pots. Take the cutting from a grown-up mother plant. Each cutting must contain one or more heads along with a fraction of root.