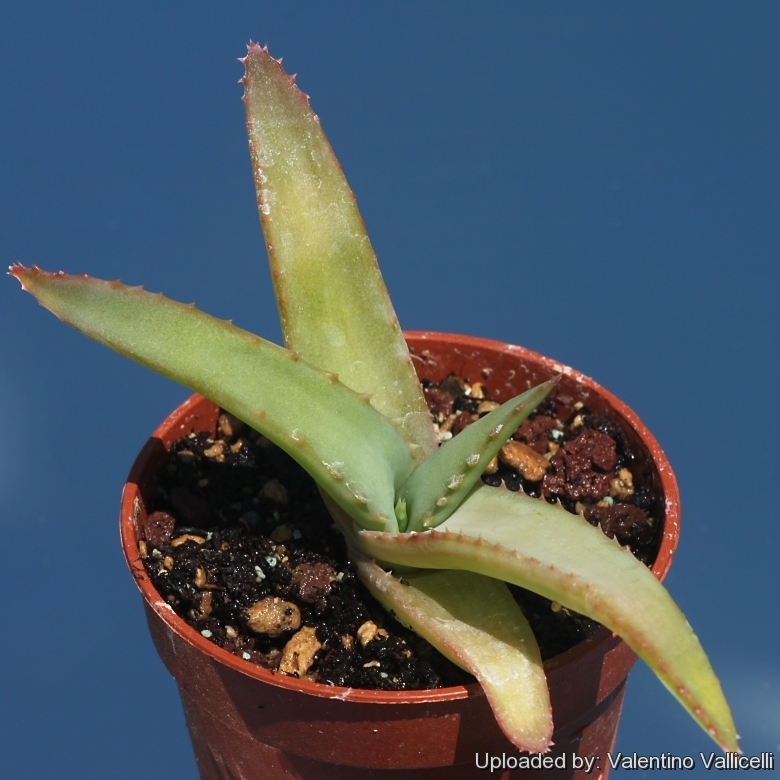 Origin and Habitat: Aloe spicata extends along the Lebombo Mountains, occurs in Mozambique, Zimbabwe, Swaziland and Northern KwaZulu-Natal; also plentiful in Mpumalanga and the Northern Province (South Africa).
Altitude range. 640–900 metres above sea level.
Habitat and ecology: Grassland, Savanna. Highly variable, including a very wide altitudinal range from the Mpumalanga Lowveld to the top of the escarpment. Plants are often found on granite outcrops, steep rock slopes and cliffs on a wide variety of soils. Temperatures are generally high, with variable amounts of summer rain. Aloe spicata is very common and not threatened with extinction. It is locally threatened by fires.

Description: The bottle-brush Aloe (Aloe spicata) is a large-growing aloe, almost stemless to arborescent, 1-2 m tall and can be solitary but can also clustering with up to few 90 cm rosettes of long gracefully recurved and relatively narrow leaves that gradually taper to a point. These leaves are bright green attractively infused with orange-pink to red tones, particularly near the margins, which also have small firm teeth. In winter 1 metre long flower spikes emerge, 3 to 5 to a rosette, with dense yellow-green flowers which appear yellow-orange due to their orange prominent stamens. Most often seen in botanical gardens under the synonym Aloe sessiliflora, this species was introduced in cultivation in 1795.
Derivation of specific name: 'spicata', arranged in a spike.
Stem: Erect, simple or branched, elongated below the leaves. Often forming shrubs with branches decumbent; stems and branches covered with withered leaf remains.
Leaves: 12–30 per rosette, succulent, laxly to densely disposed, spreading or the lower recurved. Lamina ensiform, 30-70 cm long, 4-10 cm broad low down, 8 or more mm thick in the centre, tapering gradually from the middle to a long point, channelled, uniformly green with a slight glaucous tinge, or flushed entirely coppery-red in dry conditions, obscurely lineate towards the base, mottled with copious, irregular, whitish, oblong spots. Margin deep pink to reddish with spreading, horny, deltoid-cuspidate prickles 1-2(-4) mm long and 8–15 mm apart.
Inflorescence: 1-5 per rosette, above the leaf rosette, 0.6-1.2 m tall, less than 50 mm in diameter. Peduncle slender, simple or forked, above 30 cm long with numerous sterile bracts below the raceme. Raceme oblong, cylindric, very densely flowered, (15-)30-50 cm long c. 3-5 cm in diameter; pedicels ascending, 12-18 mm long; bracts small, lanceolate to ovate-acute, pale brown,10-11 mm long, 5-7 mm wide, 3-5-nerved.
Flowers: Sessile (Pedicel absent or very reduced), brownish red in bud, greenish yellow to almost white at flowering. Perianth bright yellow, tinted with red when young 7-15 mm long, c. 10 mm in diameter at the mouth, campanulate, with much brownish nectar. Tube short. Outer segments free to the base. Stamens with filaments yellow and anthers orange exserted 5-15 mm. Ovary about 4.0-5.0 x 2.5 mm, orange. Style exserted 3-15 mm. Stigma yellow.
Blooming season: Winter (June to August).
Fruit (Capsules): About 12-13 x 6-7 mm, ovoid, dark brown almost black.
Seeds: Black c. 2.0 mm long, 1.25 wide, 0.7 mm thick, without or with very narrow pale brown wings.
Related species: Aloe spicata is related with Aloe vryheidensis. This pair is unlikely to be confused with any other aloe. In these two species, there is at least some overlap. A. spicata in Zimbabwe was formerly known as Aloe tauri. These very similar species were recently combined (Glen and Hardy 2000, Kativu 2001). Natural hybrids with other species have been reported.

Cultivation and Propagation: Aloe spicata is an easy and rewarding plant that usually does not give many problems in cultivation. Aloe spicata should be planted in full sun to light shade in a well-drained soil and irrigated sparely. It grows much better outdoors in spring and summer, it is also perfect for the bright windowsill. The drier it is kept the redder Aloe spicata will be. Aloe spicata is well-known for its neat habit, and low-maintenance.
Growth rate: It is fast-growing, and it will tolerate drought and neglect once established.
Soil: Grow it in light, fertile, well-drained, moderate soils, with a slightly acidic pH (5-6).
Exposure: It needs light shade to filtered sun, and grows well in full sun (coast) too, but will redden with more light exposure.
Watering:* Regular water in summer, keep dryer in winter, needs good drainage
Maintenance: Removal of old flower stalks; It is a suckering species, and one plant can eventually cover a large area. Divide the crowded clumps periodically. During the winter months, the plants should be grown cool to initiate flower development (about 5-10°C).
Hardiness: It can tolerate moderate frost but is sensitive to severe frost.
Propagation: Seed, suckers, division of older plants. This species is easily propagated from a branch or stem cut off, allowed to dry for a day or so until the wound has sealed, and then planted in well-drained soil or sand. They need not be rooted in any particular place and then transplanted, but can be placed directly into their permanent place in the garden. This aloe can also be grown from seed, sown in spring. Seed should take three to four weeks to germinate, and the seedlings must be protected from frost.