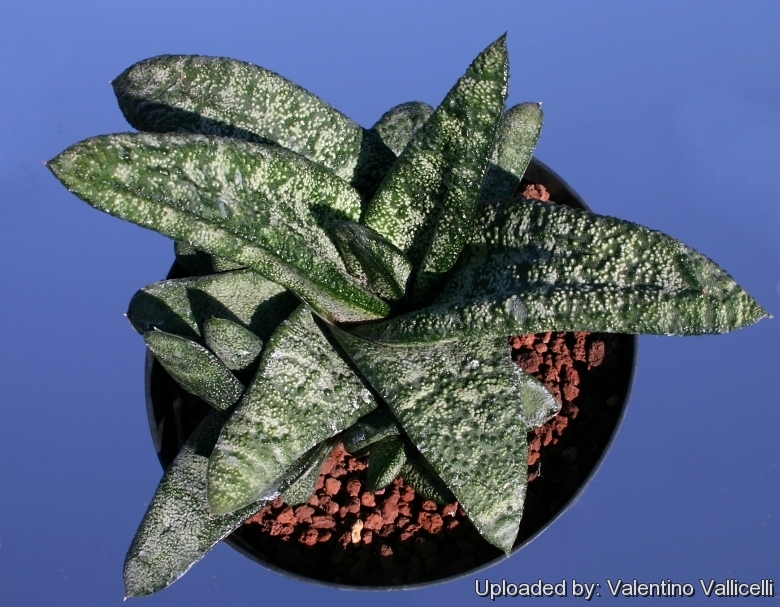 Origin and Habitat: South Africa, this species has the most northerly distribution in the genus, occurring from north of the Tukhela (Tugela) River in northern KwaZulu-Natal to the Olifants River Valley in the Limpopo Province.
Habitat and ecology: It is a cliff dweller, found in savannah at elevations from 500 to 700 m, in hot, dry, frost free river valleys in mountainous terrain. Its habitat consists of shady southern and eastern aspects where it occurs in shallow humus-rich soil (pH 6,8 – 7,1). Gasteria batesiana is pollinated by sunbirds. Its fruiting capsules becoming erect after fertilization, opening from the top only to release its flattish seed by gusts of wind, thus ensuring a sufficient dispersal distance. Its fleshy leaves store water making it a drought tolerant and ideal water wise garden plant. In spite of its habitat on cliffs becoming bone dry during winter, the plants have enough water supply for survival.

Description: It produces a succulent rosette that proliferates from the base forming small groups, rarely solitary. It is usually larger than tall and grows 30 to 100 mm tall and 80-300 mm in diameter. The plants in the wild are very variable especially for shape and roughness of the leaves .
Stem: Nearly stem less (acaulescent).
Roots: Succulent and cylindrical (terete). The roots are thick with little branching, and endowed with the ability to contract, physically pulling the plant down into the ground during dry weather.
Leaves: 50-180 cm long, 15-40 mm wide, very firm with translucent, smooth epidermis, triangular-lanceolate, strap-shaped or rarely linear, ascending spreading ultimately becoming recurved. The upper surface becoming channeled during the drought. The lower surface is convex bearing an excentric keel. Young leaves are initially in two opposite rows (distichous ) then spiral with age becoming rosulate. Both surfaces are dark almost black-green or glaucous taking on a reddish colour in strong light, they are mottled with dense white spots arranged in transverse bands and distinctly densely tuberculate, with larger and smaller green or white pearly, raised, tubercles. The leaf apex is obtuse bearing a mucro.
Flowers: The inflorescence is simple or branched ascending, spreading, arching, raceme 300-450 mm tall from which small stomach-shaped flowers dangle. The tubular flowers are 28-40 mm long with the lower part infated (“gaster” from Greek, means “belly”) the base slightly swollen, translucent pink-orange flowers tipped in emerald green . The stamens are shortly exserted or protruding. The ovary 7 X 3 mm cylindrical bearing a style of 15 mm in length. The stigma included or becoming shortly exserted. The pedicel is drooping and 9 mm long. The flowers produce abundant nectar and attract sunbirds during spring.
Fruits: The capsule 16-20 mm long bearing black flattened seed 4-6ÿ mm long, 2-3 mm large..
Blooming season: Spring
Remarks: Gasteria batesiana is related to Gasteria tukhelensis, another cliff dweller. 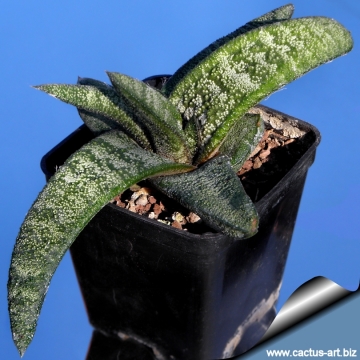 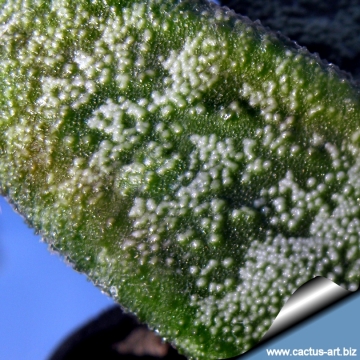 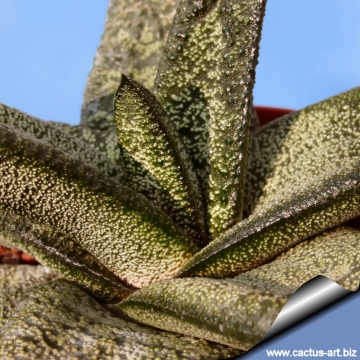 Gasteria batesiana Photo by: Cactus Art
Send a photo of this plant.

Cultivation and Propagation: They are slow growing but long-lived plants of easy culture which makes them a good houseplant and can be an excellent subject for the beginning gasteriaphile (it can grow easily on window sills, verandas and in miniature succulent gardens where they are happy to share their habitat with other smaller succulent plants, or in outdoor rockeries) Need light shade to shade, but will take full sun part of the day. (with some sun exposure the leaf develops a nice reddish tint and remain compact) They are tolerant of a wide range of soils and habitats, but prefer a very porous potting mix to increase drainage. During the hot summer months, the soil should be kept moist but not overly wet. The plants are fertilized only once during the growing season with a balanced fertilizer diluted to ½ the recommended strength. During the winter months, water only when the soil becomes completely dry. Frost hardy to -1°C (Or less).
Propagation: Gasteria is easily propagated by the removal of offshoots or by leaf cuttings in spring or summer. To use offshoots It should stay intact in the post though every head will have its own root system and it could easily be split for propagation.
To propagate by leaf cuttings, remove a leaf and let it lie for about one month (e.g. in a cool window sill), giving the wound time to heal. Then lay the leaf on its side with the basal part buried in the soil. This leaf should root within a month or two, and small plants will form at the leaf base. Young plants can be harvested the following season. They can also grown from seed. Seed should be sown during summer in sandy well drained soil and preferably protected from full sun. The seedlings are slow growing and can be planted out in small containers when they are large enough to handle. The soil should preferably be enriched with compost. They react very well to a liquid organic fertilizer.
Uses: These plants are popular among the traditional healers that believe they have the magical power of transferring their camouflage properties, which are provided by their mottled leaves that blend in well with surrounding vegetation, to humans who wash with the leaves.