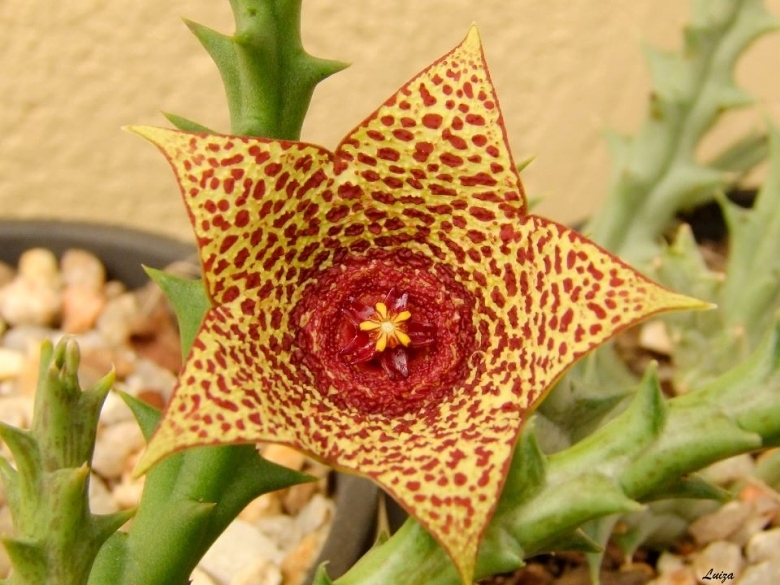 Description: Orbea verrucosa is a succulent, leafless perennial with strongly toothed stems up to 80 mm long, erect forming small clumps or mats. The five pointed, cupped, star-shaped flowers are finely warted or irregularly ridged and have a 'life-belt' ring (or annolus) around the centre, they are pale yellow with dark purple marks, but varies considerably in the depth of the yellow ground-colour and the darkness of the spotting. Two subspecies are recognized, the nominate form and var. fucosa (Stapelia fucosa).
Stems: Erect, decumbent at the base, 3.5-8 cm long, 6-16 mm across excluding spreading teeth, obtusely 4-angled, with spreading conical acute teeth 3-8 mm long, glabrous, green.
Flowers: 1–3 together near the base of the young stems, developing successively. Peduncles longer than corolla 12-30 mm long, spreading, glabrous. Sepals 5-10 mm long, lanceolate or ovate-lanceolate, acuminate, glabrous. Corolla in bud conically pointed, with a depressed-ovate pentagonal basal part, when expanded 4-6.5 mm across, subcampanulate five cleft halfway, with the united part saucer or shallowly basin-shaped, 4-6 mm deep outside, having a distinct slightly raised pentagonal solid annulus surrounding the corona, about 1 mm high, convex at the top, with 5 distinct channels radiating from the centre to its angles. Lobes recurved-spreading, 16-20 mm long, 12-16 mm broad, deltoid-ovate, very acute or acuminate, not ciliate; all parts glabrous or with some short erect hairs at the very base under and concealed by the corona, smooth outside; inside very rugose, finely warted or irregularly ridged, pale yellow with pale purple-brown to almost black spots, smaller and more crowded on the annulus, with the area around the corona entirely dark purple or purple-brown. Outer corona-lobes horizontally or slightly deflexed-spreading, about 1.5-2 mm long and broad, subquadrate, acutely bifid, with a minute tooth at the base of the broadly rounded notch, dark chocolate, with yellowish margins. Inner corona-lobes about 1.5-2 mm long from the shoulder, subhorizontally incumbent upon the backs of the anthers and slightly longer than them, but not or scarcely erect at the tips, ovate-lanceolate, acuminate, slightly gibbous on the back at the base, yellow, with the gibbosity and the margins purple-brown, without extended horns or wing.
Fruits: The fruit are paired spindle-shaped capsules (follicles), resembling the horns of an antelope, with the tightly packed seeds inside. At maturity they split open to release numerous small brown seeds crowned with long white hairs.

Subspecies, varieties, forms and cultivars of plants belonging to the Orbea verrucosa group 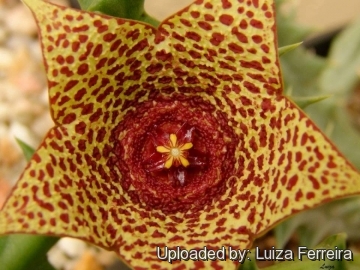 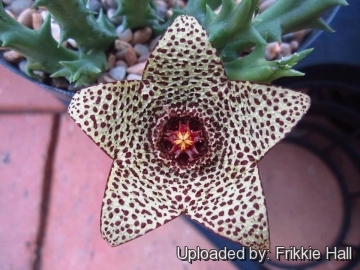 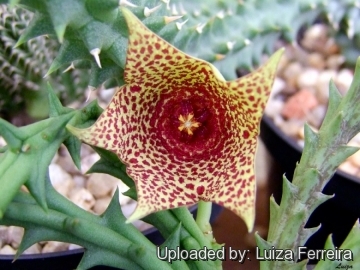 Orbea verrucosa Photo by: Luiza Ferreira
Send a photo of this plant.

Cultivation and Propagation: Orbea verrucosa grow well in light gritty soil with a very liberal drainage. They should at all times sparingly watered (best rain water with some occasional fertiliser), and in winter time they hardly require any. They require outdoor culture, or a warm close greenhouse, while growing in the early part of summer, and afterwards may be ripened and kept in a greenhouse; but as they bloom chieﬂy in autumn, warmth is desirable to enable them to expand their ﬂowers.
A minimum winter temperature of 5-10°C is acceptable, providing that plants are kept absolutely dry. They prefer light shade rather than full sun, although stems may not colour up under shady conditions.
Propagation: Plants are usually increased by cuttings, which, as they are very succulent, should be allowed to dry a week after they are taken off, when they may at once be put singly into pots.
Pest & diseases: Keep their roots free of mealy bugs, as fungal attack often occurs as a result of damage to stems by insects. A layer of grit on the surface of the compost prevents moisture from accumulating around the base of the stems and minimise the chance of fungal attack on the roots.
Traditional uses: This species is sporadically collected for food by local people.