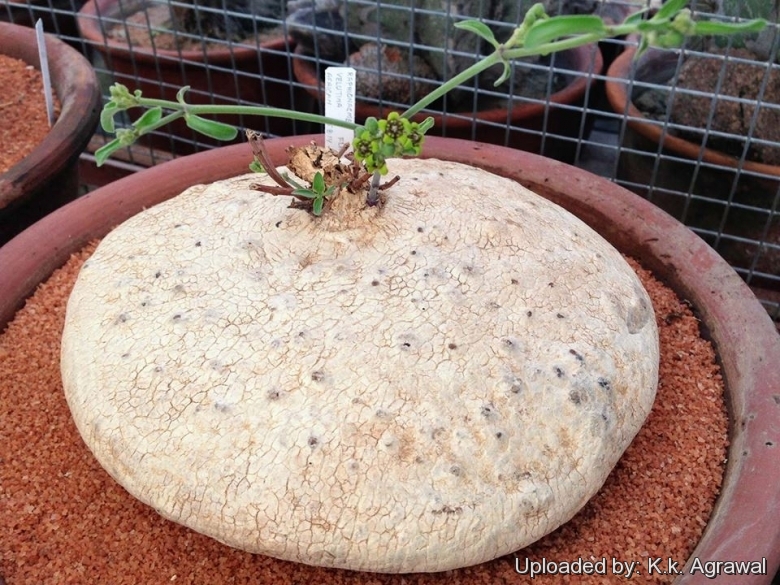 Subspecies, varieties, forms and cultivars of plants belonging to the Raphionacme velutina group

Cultivation and Propagation: Raphionacme velutina is a caudiciform plant that grows well in container.
Soil: Give the plant a well drained, airy but rich growing medium which consists of non organic material such us clay, pumice, lava grit, and peat or leaf-mould.
Irrigation: It is probably a summer grower species and need a good deal of water during active growth from spring when the new leaves can be seen forming from the woody neck of the tuber and should be watered only when not dormant. In autumn the leaves begin to go yellow and drop off, so now it rests quite dry in to winter. No water should ever be allowed to stand around the roots. An error in cultivation may produce unsightly holes in the tuber.
Exposure: In cultivation the plants are usually grown in semi shade, with the tubers wholly or (preferably) partially exposed to prevent scorching and rotting of the roots.
Hardiness: It should be overwintered in the greenhouse at temperatures over 12°C (avoid letting temperatures drop lower than 5° C, but some authors suggest that it can withstand light frost at least for short periods if very dry, in these situations it will better resist if sheltered by the winter rains, seen that the humidity and low temperatures render it more sensitive to rottenness. Plants in containers however, suffered major leaf loss.
Maintenance: The dried annual stems need to be removed to keep a tidy appearance. Like quite small pots, repot in very later winter, early spring.
Traditional uses: Raphionacme velutina, is known to the bushmen as 'Bi'. It is a useful plant that is particularly important as a source of water in the dry months. It flourishes all year round, and is a major source of water where a water source is not available. It's tuber is juicy, fibrous and bitter.
Reproduction: Can be reproduced both by cuttings and seeds.