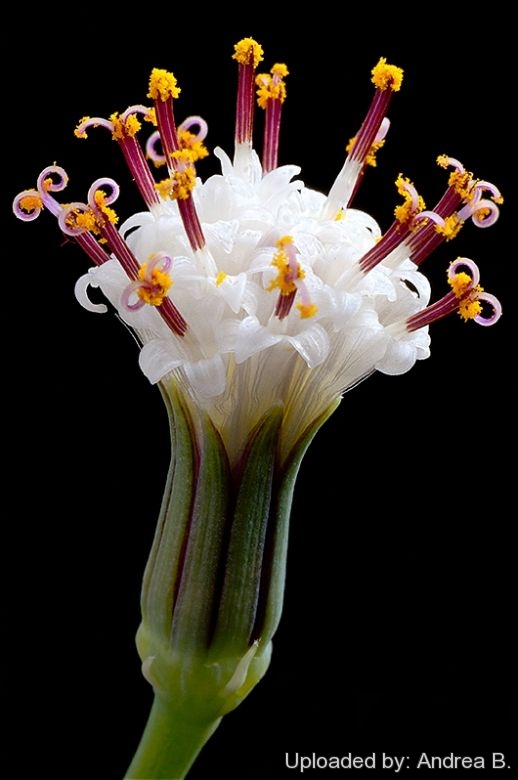 Description: Senecio rowleyanus, colloquially known as "String of Beads" is a unique-looking succulent plant with thin, wiry stems that carry peas/pearls/beads shaped leaves along their, entire lengths. Cultivated in sunny windowsills or in hanging baskets it will rapidly form dense bunches of thin stems dangling over the edge of a pot. Variegated cultivars are available.
Habit: It is a mat-forming perennial succulent with creeping shoots growing prostrate along the ground, but often trailing or pendent.
Stems: Very slender, thin, wiry, green 60-90 cm long. If it grows along the ground it can spread indefinitely. As it produces adventitious aerial roots that grow down where they make contact with soil.
Leaves: 5-8 mm in diameter, globose or depressed-globose, slightly elongated, with a short mucro (beak) at the end opposite the points of attachment to the stems. Shiny, light green with a narrow, light green window along their length. The succulent leaves are spherical to minimize surface area, thereby conserving water.
Inflorescence: 3-5 cm in diameter and brushlike lack the brilliant colourful ray florets that often characterise daisy flowers. Fertile florets tubular, dull white with mauve anthers and violet Style, and pleasantly cinnamon-scented.
Blooming season: From spring to autumn.
Chromosome number: 2n = 20.
Remarks: Senecio rowleyanus is similar to some diploid races of Senecio radicans, but the smallest overall.

Subspecies, varieties, forms and cultivars of plants belonging to the Senecio rowleyanus group 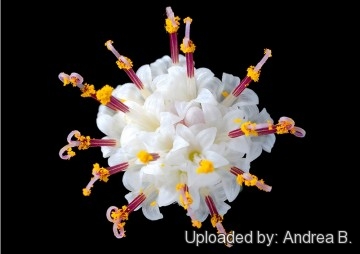 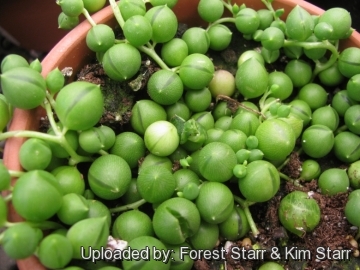 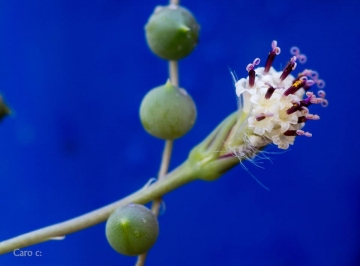 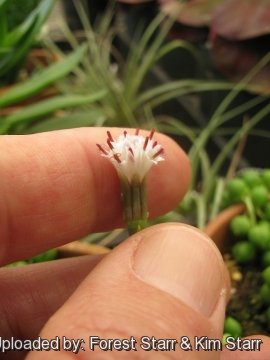 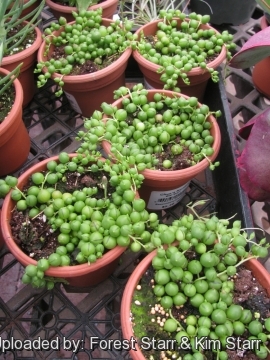 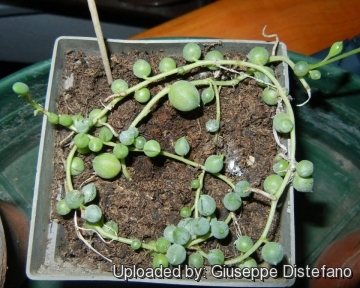 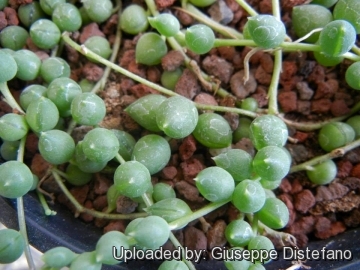 Cultivation and Propagation: Senecio rowleyanus forms the most striking trailing stems if grown in a suspended basket. In a warm Mediterranean climate, it can be grown as a ground cover as well.
Growth rate: The plants grow profusely and can fill a 25 cm pot in just a year or two given the best conditions.
Soil: This plant does well in a cactus potting mix. Use pot with good drainage.
Transplantation: Repotting every 2-3 years. The trick is to be as careful as possible, as the string of pearls falls apart easily. Add some potting mix (compost) to the new container to bring the repotted plant to the correct height. Cautiously upturn the old container, supporting the plant with a gentle hand, position the root ball into the new container, add extra potting mix to fill any empty spaces, and carefully arrange the pearls to hang over the pot.
Watering: Water regularly during the growing season every weeks or so, making sure to drench and letting all the water drain out of the pot. If all the leaves fall off don't fret, stop watering and wait until it starts to grow again. Less water during winter months. In the rest period no high atmospheric humidity!! Care must be taken with watering as they tends to become swollen and untidy in growth habit if given too much water and shade.
Fertilization: Use a liquid plant food that is for cacti and succulents rich in potassium and phosphorous, but poor in nitrogen, because this chemical element doesn’t help the development of succulent plants, making them too soft and full of water.
Exposure: Grow ii slight dappled shade including two to three hours a day of direct sunlight through the year, which encourages flowering and heavy leaf production.
Hardiness: Reputedly sensitive to frost , but less so if kept on the dry side prior to, and during, cold weather (hardy to -5° C for short periods). However some warmth throughout the year will increase the grower's success (minimum 5° to 8°C during rest season). It does not like hot weather and needs cool air with ample airflow.
Pest & diseases: Just be sure to treat for aphids and mealy bugs if they appear. Rot it is only a minor problem with succulents if the plants are watered and “aired” correctly. If they are not, fungicides won't help all that much.
Warning: The fleshy leaves are poisonous and should not be consumed.
Propagation: Stem cuttings are easy to propagate, cut off strings near a node and stick them into fresh soil to restart. The cuttings should root in 2 to 6 weeks. It will form potato-like lumps under the soil.